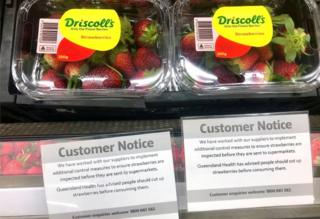 A woman has been arrested in Queensland in connection with the “strawberry scare” where sewing needles were found hidden inside fruit.

Police said the 50-year-old was arrested on Sunday “following a complex… and extensive investigation”.

The woman is expected to face unspecified charges on Sunday evening.

A nationwide investigation was launched after shocked shoppers first reported the contamination in September.

There were over 100 reports of needles being found in strawberries, though many were suspected to be copycat cases or social media stunts.

Farmers were forced to dump tonnes of berries, and supermarkets pulled the fruit off sale.

The first cases emerged in Queensland, where a man was taken to hospital with stomach pains after eating strawberries.

The scare spread to every Australian state and later to New Zealand, raising public alarm.

In response, Australia’s government raised the maximum prison term for fruit tampering from 10 to 15 years.

Prime Minister Scott Morrison vowed to “throw the book” at anyone responsible, saying: “It’s not funny, putting the livelihoods of hard-working Australians at risk, and you are scaring children. And you are a coward and a grub.”

In Queensland, where the strawberry industry is worth A$160m (£89m; $115m) a year, the local government pledged A$1m to support the state’s stricken farmers. An A$100,000 reward was offered for information leading to the arrest and conviction of perpetrators.

The arrested woman, who has not been named, is set to appear in a Brisbane court on Monday.