Can the celebrity civil servant steering New Zealand through its lockdown succeed again? 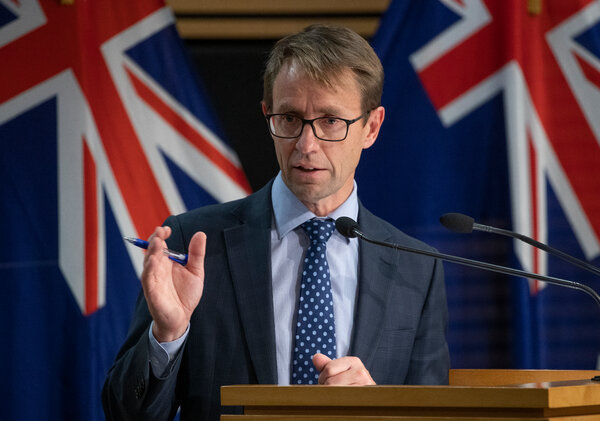 Last October, I attended a rock concert by Don McGlashan, a veteran New Zealand singer-songwriter, in Wellington. Halfway through, he paused the show to call for a round of applause for someone in the audience: Ashley Bloomfield, the country’s top health official.

Up to that point, the crowd had displayed the kind of mild-mannered politeness you might expect of middle-aged civil servants — seemingly the majority of the crowd — but with the mention of Mr. Bloomfield, everyone went wild.

Before the pandemic, he was New Zealand’s near-anonymous director-general of health, a position he has held since 2018. He has since become a household name and collective crush, immortalized in hand towels and passion fruit pastry. For many New Zealanders, he is seen to occupy a position “somewhere between their beloved stepdad and a saint,” Ben Thomas, a New Zealand political commentator, said to me in a recent interview.

On TikTok, Mr. Bloomfield’s near-daily appearances in pandemic news conferences have been set by fans to sultry soundtracks and accompanied by the hashtag #daddybloomfield.

While Mr. Bloomfield’s self-effacing, slightly professorial manner seems to play well with New Zealanders, his popularity is rooted in the country’s success in keeping out Covid-19.

Until very recently, New Zealand seemed to have made it through the worst of the pandemic almost unscathed. With a robust elimination strategy, the country has experienced fewer than 3,000 cases since the start of the pandemic and only 26 deaths. The economy is in reasonable shape, unemployment is low and freedoms have been at prepandemic levels for most of the last year. As the country’s vaccination effort began to ramp up and amid nascent plans for reopening, the end appeared in sight.

But one mystery case appeared in the community Aug. 17 and quickly spiraled into an outbreak of nearly 350. Cases are yet to peak. We are almost two weeks into a restrictive nationwide lockdown — but instead of anger, Ashley-mania is on the up, all over again. He is still being looked to as the expert who can get New Zealand out of Covid trouble.

For now, staying at home is relatively novel for most New Zealanders. In Auckland, the epicenter of the outbreak, people are mostly sanguine about the prospect of a weekslong lockdown, which worked well in the first stages of the pandemic. Compliance is high: We’ve yet to experience the lockdown fatigue that has troubled Australian lawmakers in Victoria or New South Wales. (As one TikToker put it, the end of the lockdown will mean confronting the sad reality of seeing Mr. Bloomfield’s face less often at the news conferences.)

But that enthusiasm may dwindle after weeks indoors. At this early point, New Zealand’s Covid-19 modelers anticipate a lockdown of a month or more for Auckland. The free rein we had grown accustomed to — no masks, crowded bars, thumping concerts — may not return even after the country reopens. And our vaccine rollout is far behind that of most other wealthy countries, putting collective immunity out of reach for months to come.

The Delta variant has already felled the elimination strategy in some Australian states. It may now represent significant problems for New Zealand’s plans.

I’ll have an article about that in the near future. Feel free to share your thoughts with us about New Zealand’s Covid challenge at [email protected]

Here are this week’s stories:

Australia should shift its focus away from lockdowns, its prime minister says. The country intends to begin to reopen international borders once 80 percent of eligible Australians have been vaccinated.

A local government in Australia killed its impounded dogs over coronavirus fears. All of New South Wales is in lockdown as an outbreak of the Delta variant continues to spread.

Australia is Betting on Remote Quarantine. A former mining camp in Howard Springs has been turned into a temporary home for hundreds of domestic and international travelers.

At Least 13 U.S. Troops Among Masses of Dead in Kabul Suicide Attack. Bombers struck a huge crowd outside the airport, killing dozens of civilians in the waning days of the U.S. evacuation from Afghanistan.

Even Billy Joel Mocked ‘We Didn’t Start the Fire.’ Now the 1989 song lives on in parodies and memes.