[Sign up for the Australia Letter to get news with context, conversation starters and local recommendations in your inbox each week.]

SYDNEY, Australia — When Hollywood’s elite donned black at this year’s Golden Globes to raise awareness for the #MeToo movement, the Oscar winner Geoffrey Rush skipped the event altogether. Accused of sexually harassing a young actress during a production in Sydney of “King Lear,” Mr. Rush was suffering “physical trauma,” a friend said.

Mr. Rush, 67, is now suing the Australian tabloid that had splashed the allegations across two front-page articles last year, claiming he was defamed. The case has become a moment of reckoning for both the Australian entertainment industry and a #MeToo movement that has been muted here compared with its counterparts in the United States and elsewhere.

Closing arguments began Wednesday in the trial, which pits Mr. Rush against Rupert Murdoch’s Nationwide News, publisher of the tabloid, The Daily Telegraph.

The trial, she said, is exposing a generational shift that “is challenging for older generations of artists who just think, ‘Get over it, toughen up.’”

Given the nation’s strict defamation laws, some experts believe the Rush trial is also having a dampening effect on #MeToo.

“This case has done more than anything to slow down the #MeToo movement,” said Michael Bradley, a Sydney-based media lawyer. “There were a lot of stories being prepared in various media organizations ready to run that got killed.”

The Daily Telegraph articles accused Mr. Rush of acting inappropriately toward an unidentified actress, later revealed to be Eryn Jean Norvill, during a 2015-16 Sydney Theatre Company production of “King Lear.” One story was accompanied by a photograph of Mr. Rush in character and “King Leer” as the headline. 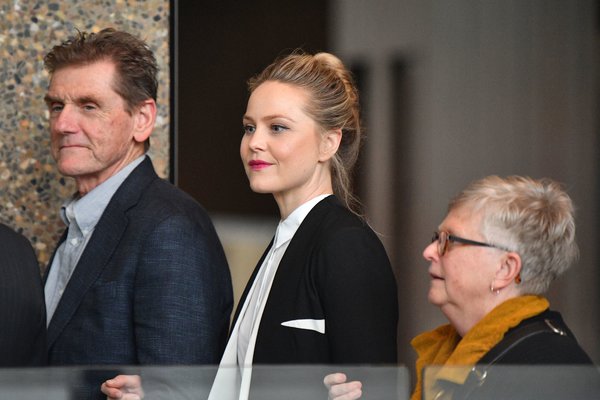 Mr. Rush claimed that the articles falsely depicted him as a “pervert” and a “sexual predator.”

The case has attracted a large cast of supporting characters. Backing Mr. Rush is the crème de la crème of the Australian theater aristocracy: The theater director Neil Armfield, the film director Fred Schepisi and the actors Robyn Nevin and Helen Buday have all testified in his defense.

Supporting Ms. Norvill, who is in her mid-30s, are #MeToo campaigners and younger members of the theater industry. Many are using the online hashtag #IstandwithEJ.

Mr. Rush conceded to the court that he may have called Ms. Norvill, who played King Lear’s daughter Cordelia, “yummy” but said it was simply theater “banter.”

One text message Mr. Rush sent to Ms. Norvill read, “I was thinking of you (as I do more than is socially appropriate),” and included an emoji of a winking face with a panting tongue. Mr. Rush told the court it was a “throwaway line.”

Ms. Norvill, testifying before a packed gallery last week, said that Mr. Rush made “groping” and “cupping” gestures toward her breasts during rehearsals, “raising his eyebrows, bulging his eyes, smiling, licking his lips.”

In a critical scene, when King Lear grieves over Cordelia’s dead body, Ms. Norvill stated that Mr. Rush “deliberately” stroked her breast, a claim corroborated by another actor, Mark Winter, who was on stage.

“At the time I was on stage with my eyes closed playing a dead body, so I probably felt very trapped because I couldn’t do or say anything, or move,” Ms. Norvill said.

Asked why she did not raise a formal complaint, Ms. Norvill said that the consequences of speaking out as a junior member of the cast would have been “catastrophic.”

“I was at the bottom of the rung in terms of hierarchy, and Geoffrey was definitely at the top,” she told the court. She added that “his power was intimidating” and that the other members of the production were “complicit” in turning a blind eye.

Deb Verhoeven of the University of Technology Sydney, who studies gender inequity, said that the Australian theater industry was “a small world, literally.”

“If you speak up,” Professor Verhoeven said, “you will suffer the reputational consequences more severely than you might in other places or other similar industries.”

The legal implications in Australia add to an atmosphere of fear.

“Why would I make an informal complaint or any kind of complaint if I feel I am going to end up having my reputation questioned in front of the court?” Professor Verhoeven said. “That’s why it’s silencing. The ultimate effect will be to shut down opportunities for women to voice their experience.”

Ms. Norvill is, in many ways, a reluctant #MeToo figure. Off-the-record comments she made to a colleague about Mr. Rush were later repeated by a source to The Daily Telegraph. She was not interviewed for the articles.

Ms. Norvill “has been forced to recount her trauma in a fight between a rich old man & a rich old newspaper. Whoever wins, she loses,” wrote Nic Holas, campaigns director for Change.org Australia, on Twitter.

Key to the plaintiff’s case is that she is only now speaking up. But Ms. Norvill told the court: “I had the least power. What was I supposed to do?”

Want more Australia coverage and discussion? Sign up for the weekly Australia Letter, start your day with your local Morning Briefing and join us in our Facebook group.