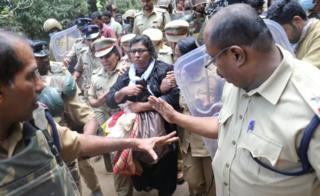 Two Indian women in their 40s have made history by entering a prominent Hindu shrine in the southern state of Kerala, after months of protests against women getting in.

The Sabarimala temple was historically closed to women of “menstruating age” – defined as between 10 and 50.

The Supreme Court overturned that ban but protesters then attacked women and stopped them from entering the shrine.

Bindu Ammini, 42, and Kanaka Durga, 44 entered the shrine around dawn.

“We arrived early in the morning and we had a darshan [saw the idol] for a few minutes,” Ms Ammini told the BBC’s Ashraf Padanna.

The two women had also tried entering the temple on 24 December but they had to turn back because of protesters.

Temple officials, who say the women have “defiled” the temple, closed the sanctum for an hour in order to perform “purification rituals”.

A senior temple official told the BBC that the sanctum has now reopened.

He said the temple administration’s decision to shut down the temple after the women visited had “violated” the courts’s ruling.

While most Hindu temples allow women to enter as long as they are not menstruating, the Sabarimala temple is unusual in that it was one of the few that did not allow women in a broad age group to enter at all.

It sits atop a steep hill and every year, millions of male devotees trek up the hill, often barefoot, to visit the shrine. One of the ways to enter the temple is to climb 18 holy steps and, according to the temple’s website, this is a sacred activity and no pilgrim can climb them without undertaking a rigorous 41-day fast.

Ms Ammini said they did not climb the steps because it was very crowded and they feared they might be attacked.

“We had no trouble trouble trekking to the shrine and the officials were co-operative,” she added. “We left before the protesters spotted us.”

She said that plain-clothed police officers accompanied them. The women can be seen leaving the shrine in videos that have been circulating on WhatsApp.

The temple only opens for brief periods throughout the year. Despite the ban being overturned in September, no women have been able to enter the temple until now because of massive protests. The few who did try were forced to turn back.