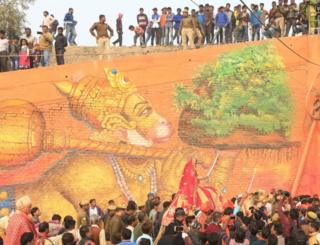 Thousands thronged the streets of Allahabad to seek blessings from transgender sadhus (holy people), ahead of the Kumbh Mela festival, which is set to begin in the city on 15 January and will continue until 4 March.

It is one of Hinduism’s holiest events and billed as the world’s largest religious gathering.

It has been taking place every few years over centuries. Four different northern cities, all along the banks of a holy river, take turns hosting it. Hindus believe that taking a dip in these rivers during the Kumbh will wash away their sins and help them attain salvation. So, tens of millions gather at the festival to do just that.

In the days leading up to the Kumbh, each of Hinduism’s 13 official Akharas or congregations embark on processions to mark their arrival at the festival.

These processions are highly coveted as people line up to see holy men and women perched on top of heavily decorated floats.

Sunday’s procession was different. It had the usual fanfare – floats, musical bands, camels and horses – but the sadhus were all transgender. 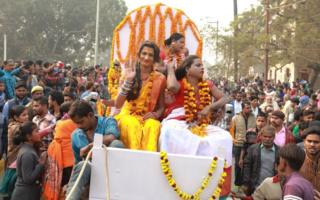 According to one estimate, India has about two million transgender people. But it wasn’t until 2014 that the Supreme Court recognised them as a third gender in a historic ruling.

Then in 2018 the court ruled that gay sex was no longer a crime, overturning a colonial-era law.

“Those were significant victories but now the fight to get us social acceptance and our presence at the Kumbh is another step in that direction,” said Laxmi Narayan Tripathi, the head of the transgender congregation, which is known as the Kinnar Akhara. 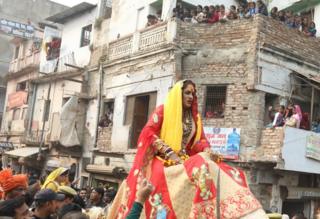 Hindu mythology and scriptures are full of references to transgender people – some Hindu gods and goddesses are transgender too. But rights groups say the community is ostracised and faces huge discrimination because of their gender identity.

The Kinnar Akhara has been battling the other congregations to lead such a procession. Finally, they chose to do it despite being denied official recognition.

“Transgender people have been mentioned throughout Hindu mythology. You can’t just wish us away,” said Atharv, a member of the Kinnar Akhara, who goes by first name only.

“If there can be 13 Akharas for men and women, why not one for transgender people?” 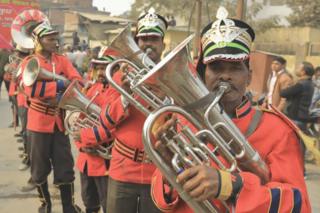 Some of the other Akharas say that they are centuries-old and cannot allow the creation of a new congregation that easily.

“The Kumbh is a place where everybody is welcome and we welcome transgender people as well. But they can’t be recognised as an Akhara,” said Vidyanand Saraswati, spokesperson of the Juna Akhara, which is the biggest of the 13 Akharas.

“If anybody wants to spread spirituality and religion, we are not opposed to that. But they should leave certain matters to us,” he added.

But some religious leaders do support the Kinnar Akhara.

“Hinduism has always acknowledged and accepted the presence of transgender people,” Atmananda Maharaj, a priest at a prominent temple in northern India, told me.

“They are only asking for what is rightfully theirs. Why should we deny them?” 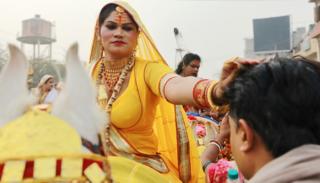 This isn’t the first time the Kinnar Akhara has led such a procession – they did it at the Kumbh in 2016, which was held in the northern city of Ujjain.

“Leading the procession in Allahabad is special because it’s one of the holiest cities in Hinduism and the Kumbh Mela here is more auspicious and larger than in any other place,” said Atharv.

But members of the Kinnar Akhara said it took them two years to get a plot of land at the site of this year’s festival – each congregation is allotted space to set up camp.

Atharv said the fight was worth it.

“We respect the Akharas who oppose us. I am sure that someday they will realise that Hinduism respects everyone, including transgender people. For now, our fight is not to be recognised as an Akhara but to make people realise our religious, spiritual and social identity. Looking at the crowds that welcomed us, I feel we are doing something right.” 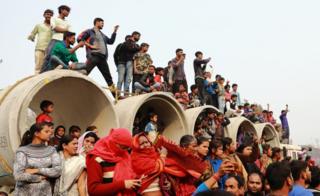 There was excitement among the devotees who sought blessings from the transgender sadhus as well as selfies and videos of them.

Read and watch more about the Kumbh Mela

“We always respect transgender people and seek their blessings during happy occasions like child birth and marriages,” said Abhay Shukla, a resident of Allahabad.

“But I had never imagined to see them as gurus. It’s a different experience for us.” 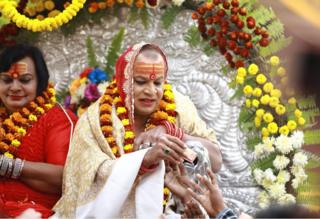 Members of the Akhara believe that this procession is a milestone in the fight for transgender rights in India.

“The crowds today made us believe that change is possible,” said Bhawani Ma, another member.

“I never thought that we would get such support from people. The Kumbh has shown us that the future holds good things for us. We have suffered neglect, abuse and segregation for generations and that is why seeing the crowds meant so much to us.”

Mr Shukla seemed to agree with this sentiment.

“For me, spirituality matters,” he said.

“I don’t care if my guru is a man, a woman or a transgender person. I know that many people don’t see it this way but they will change when they come to the Kumbh and see the Kinnar Akhara.”