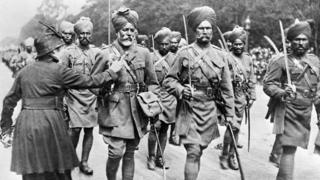 Approximately 1.5 million Indian soldiers served in World War One – and more than 74,000 of them lost their lives.

It’s 100 years since the armistice of 11 November 1918 ended what was once called “the war to end all wars”. But there are still many untold stories about the Indian Army from the conflict – personal accounts that show how global the war was, and how extraordinary Indian experiences were.

Historian George Morton-Jack relates some of these stories.

Of all the Indian troops who fought between 1914 and 1918 – there were four times as many as those from Australian, New Zealand, Canada, South Africa and the Caribbean combined – Arsala Khan of the 57th Wilde’s Rifles was the first to go into battle.

He led the troops of the first Indian company to enter the British trenches on the western front, in Belgium on the night of 22 October 1914.

Arsala Khan went on to serve until 1918, in France, Egypt, German East Africa and India. Then, in the summer of 1919, he represented his regiment in London at the official Indian victory parade.

With a thousand other Indian veterans, he marched past the city’s greatest war monument, the Cenotaph, where many of them broke into tears.

World War One’s great Western writers – from Wilfred Owen and Winston Churchill to Siegfried Sassoon and many more – have long been among the most famous.

But there was one writer in the Indian Army who wrote something perhaps even more extraordinary: Captain Amar Singh penned what is possibly the world’s longest diary.

Spanning 89 volumes from the 1890s to the 1940s, Singh’s incredible diary covers his experience of the war from India to the western front and Britain, and on to the Iraq front, with his troopship dodging German U-boats in the Mediterranean along the way.

Singh finished the war back in India, where in 1917 his wife, Rasal, gave birth at their home in Rajasthan to their daughter Ratan.

The baby girl was their sixth child and the first to survive disease in infancy, giving them new hope for a happy post-war family life.

Kasturba Gandhi was with her husband Mahatma Gandhi in England when World War One broke out.

Together they volunteered as auxiliary hospital workers among the Allied troops in western Europe.

In 1914-15, Kasturba Gandhi worked in Indian Army hospitals – on England’s southern coast – set up for some 16,000 Indian soldiers who had been wounded in France and Belgium.

“Mrs Gandhi was particularly anxious to see that no Indian patient suffered or felt embarrassed on those delicate questions of caste distinctions,” wrote Daya Ram Thapar, a fellow Indian medical volunteer at the hospitals.

“She undertook to look after the feeding of seriously ill orthodox patients and often used to clean their utensils if they objected to being fed by non-Hindus.”

Awal Nur (centre) belonged to the most famous Indian Army regiment of 1914-18, Queen Victoria’s Own Corps of Guides.

He served in Belgium, France and East Africa from 1914 to 1917, and he was wounded three times. But his most extraordinary exploit was on His Majesty’s secret service.

Nur was one of 16 Indian soldiers specially chosen to join British officers on a secret Indian Army mission into Soviet Central Asia in early 1918.

On the direct orders of London, the mission’s goal was to stop Soviet resources in Central Asia from reaching the Germans by railway and the Caspian Sea.

Nur’s adventures as a secret agent took him across the Himalayas on a yak, before he worked tirelessly with other officers to frustrate enemy plans and escape capture.

Mir Dast was the older brother of Mir Mast, a deserter and German secret agent. Dast was more like his brother than meets the eye: he also deserted.

He sailed for France in 1914, four months after his brother. It’s not known if they saw one another there. Yet it’s unlikely as they served in different divisions, places and battles on the western front.

In April 1915, Dast won the Victoria Cross for his actions in Ypres under chemical attack. The Germans had released poisonous chlorine gas from trench cylinders in yellow-green clouds that rolled on the breeze over the attacking Indian troops.

“I inhaled the gas, say, for eight or ten seconds,” Mir Dast estimated, “It brought water from my eyes and nose.” Yet he fought on, rescuing wounded comrades and carrying them back to the British trenches into the night.

In August 1915, the medal was pinned to Dast’s chest by King George V in front of a special audience in a hospital in England.

Dast returned to India in early 1916 to recuperate from wounds inflicted by the gas as well as other battles. When he returned to duty with his regiment in 1917, he was a war hero celebrated in the Indian media.

Yet Dast decided to quit the British service that year. He did so by joining his brother on the roll of deserters, an inconvenient truth the British covered up.

Legend, which views Dast as ultra-loyal and his brother, Mast, as disloyal, has it that Mast won the Iron Cross, the German honour for military service. But this is a myth – he, in fact, won a medal for diplomatic service, the German Order of the Red Eagle.

Pratap Singh, an aristocratic officer of the Jodhpur Lancers, had an incomparable mix of energy, professionalism and charm.

He was 73 years old when he went to war in 1914, becoming the oldest soldier in the British trenches on the western front. But he was still young at heart.

An indefatigable socialite, Singh would take leave of his regiment in France to dine with the powerful and famous – the list included French President Raymond Poincaré, the French Army’s Commander-in-Chief Joseph Joffre, King Albert I of Belgium and the British Royal family.

Singh’s two teenage sons, Hanut and Sagat, joined him in the trenches also as officers of the Jodhpur Lancers. He took them with him when the Lancers moved to the Middle East in 1918, and they served together in Egypt, Jordan and Palestine.

Singh’s performance was astounding in September 1918 in Palestine at the Battle of Megiddo – the Indian Army’s crowning battlefield achievement against the Turks to confirm the Ottoman Empire’s downfall.

Aged 74, he stayed in the saddle for 24 hours among charging horsemen on the offensive. Yet this feat proved too much even for him; he had to retire sick.

But within weeks Singh was back on his feet pleading to represent India at the Paris Peace Conference.

“Of all the soldier princes of India, I think I am the only soldier who has stuck to his post at the front throughout the war,” he wrote to the King George V to make his case.

The British did not grant him his wish, leaving him to rue the punitive Treaty of Versailles imposed on Germany in 1919. “Politically, it was a mistake,” he wrote at the time. “I am sure the Germans would not rest without taking revenge some day.”

The Armistice 100 years on

George Morton-Jack is the author of The Indian Empire at War: From Jihad to Victory, the Untold Story of the Indian Army in the First World War (Hachette India).