Sitting in Silence With 5,000 Fans: The New Sound of Japanese Sports

The country has welcomed spectators back to stadiums, but the highly orchestrated singing, chanting and drumming for which they are known is now strictly forbidden. 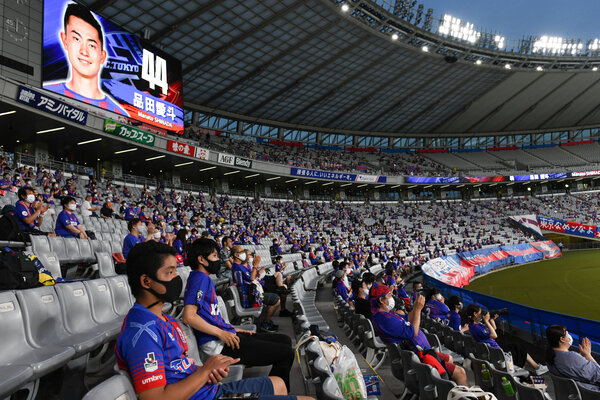 TOKYO — As the players drove the ball down the field, I suddenly heard the distinct crinkle of a plastic bag a full four rows in front of me, where a man was pulling out a chicken drumstick to eat.

This was the sound of Japanese professional soccer in the era of the coronavirus.

While the major sports leagues in the United States and Europe are playing mostly before empty stands or cardboard cutouts, fans in Japan have been attending games since early July, after a four-month hiatus.

But there are trade-offs.

In normal times, Japanese fans are not only loud, they are also extremely orchestrated and utterly disciplined. Nonstop through a match, they sing, cheer, chant, bang drums and wave enormous team flags — a boisterous spectacle that often rivals the actual play on the field for entertainment value.

Now, most of those activities are banned for fear that people might be roused into a frenzy of shouting, with any spray becoming a vector for spreading the virus.

So when I attended a home match on a recent Sunday surrounded by nearly 4,600 fans of FC Tokyo, one of 18 teams in the top tier of the Japan Professional Football League, or J-League, the spectators were scrupulously quiet — except for an occasional crinkle of a food wrapper or a spontaneous burst of applause. 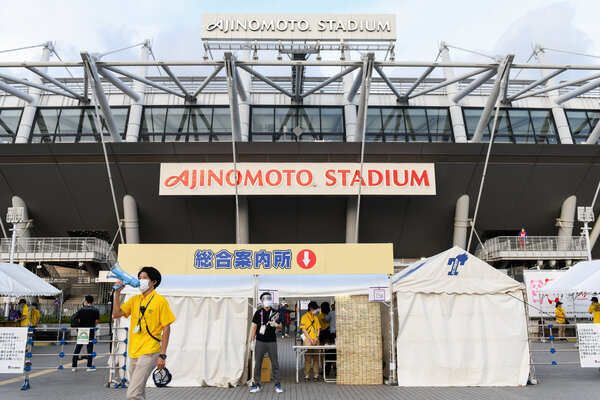 Without the normal din, I registered each resounding thwomp! as cleats met ball.

Below a parenthesis-shaped moon, a chorus of cicadas thrummed along with the shouts of the players calling to each other under the floodlights.

And when the fans applauded a goal or great save, it gave the match the feel of a symphony concert, with the audience clapping between movements.

Japan, where the virus has been a persistent presence since January but has never flared out of control as it did in the United States and Europe, is welcoming fans to stadiums as part of an effort to keep its economy running.

The country has not resorted to locking down society to suppress the virus, and a national emergency declared in April largely depended on voluntary compliance. Even in recent weeks, when Japan reported more than 1,000 new infections on some days, there has been no move toward a shutdown.

Business leaders coined the slogan “with corona” to describe their philosophy of reducing risk while living with the virus. Both the Tokyo governor, Yuriko Koike, and Prime Minister Shinzo Abe popularized the phrase as a guiding principle for the country’s coronavirus response.

As part of the bargain, the public is asked to adhere to strict rules. In general, people comply.

Most wear masks as a matter of course and spritz liberally from the bottles of hand sanitizer that have cropped up everywhere. On public transit, people are asked not to speak, so as to reduce the possibility of emitting aerosolized virus particles.

Late last month, Japan’s central government extended restrictions on large gatherings to no more than 5,000 people through the end of September.

On my way to the FC Tokyo game with a friend — an ardent season ticket holder — and his daughter, almost nobody else spoke on the sparsely filled train, their noses buried in their phones or an occasional book. (In fairness, this is pretty normal behavior for Japanese commuters.)

At the stadium, everyone submitted to an infrared thermometer scan at the admission gates. Markings on the ground kept fans at a social distance as they lined up to buy food or souvenirs.

In the stands, every other row remained empty, with two seats left vacant on either side of each ticket holder. Even family members could not sit side by side. Half the stadium — the entire “away” section — sat unoccupied. During the game, the spectators all remained in their seats.

Ticket buyers had been asked to submit their names and contact information so that contact tracers could track them down if there was a coronavirus case at the stadium, although according to the soccer league, no spectators have yet been infected at matches since they reopened.

Katsutoshi Ito, a loyal fan who has attended most home games since 2011, said he felt safer in the stadium than at a bar or restaurant. On the empty seats in front of him, he draped team scarfs and towels, as well as two stuffed raccoon dogs — the FC Tokyo mascot — one wearing a tiny white cloth mask.

For die-hard fans, the toughest changes are the prohibitions on the chanting, singing and flag waving they love to do.

“It’s because we are all human,” said Shoji Fujimura, a general manager in the J-league’s coronavirus response office who helped develop the spectator rules along with public health experts and officials from Japan’s baseball league, which has also staged games for a limited number of spectators.

“Waving a flag or drumming can get people excited,” Mr. Fujimura added. “And this can cause others to gather, which can lead to everybody raising their voices.”

The same goes for alcohol, which is also banned.

On the night I attended, the fans sometimes could not refrain from shouting cheers of victory for the goals or groaning audibly at missed chances. At one point, I heard an errant fan warning a defender about a forward from the opposing team: “He’s getting close, he’s getting close!” Occasionally, I heard other spectators exhorting a striker to “shoot! shoot!”

But for the most part, the only noise from the stands was intermittent clapping. During the broadcast of “You’ll Never Walk Alone,” FC Tokyo’s theme song, the supporters — who would normally be belting out the lyrics — silently held team scarves aloft, some waving light sticks.

“Everyone knows we need to protect everyone else,” said Kiyomi Muramatsu, who has been a supporter since 2000 and said her four children grew up watching matches from the stands.

“We also don’t want to cause any trouble for FC Tokyo,” Ms. Muramatsu said, “or go back to a situation where no spectators are allowed in.”

FC Tokyo’s coach, Kenta Hasegawa, said the occasional burst of applause was better than nothing. “Although they are not cheering for us with their voices and by making noises, all of that excitement is included in their claps,” he said.

One J-League team, Sagan Tosu, based in Kyushu, had to suspend games in August after 12 players and staff members, including the coach, tested positive for the coronavirus.

Kentaro Iwata, an infectious disease specialist at Kobe University Hospital, said that if the incidence of infections remained low in Japan and spectators followed social distancing rules and avoided hugging or high-fives, “I would say the current measures are acceptable, at least for now.”

But Dr. Iwata said that while the open-air stadium was relatively safe, the ride on trains or buses to the events, or instances where maskless fans talk to each other, could pose larger risks.

Some fans have been asked to stay away. Sumie Tanaka, 65, who has attended FC Tokyo matches for 15 years as a family affair, said her son’s employer had barred him from participating in large events.

“He is going into work every day,” Ms. Tanaka said. “He knows that if he comes to the games and gets infected, it will be bad.”

The soccer league did loosen one of the rules that had been in effect; spectators can now clap rhythmically.

“After watching a few matches, we observed that rhythmic clapping inevitably occurred,” said Kei Takahashi, the administrative manager of FC Tokyo. “But it would not lead to extra excitement and raised voices.”

At the Sunday match, Noriyuki Yamagami, a season-ticket holder, tried to overcome the dearth of spectators by placing cardboard cutouts clothed in team jerseys on the seats flanking him.

Wary of any exposure to the virus, he lashed a bandanna over his surgical mask for extra protection and said he was currently eating separately from his family at home as a precaution.

But he said he just couldn’t stay away.

“When I was watching the games on a screen, I just wanted to come to feel the air, have the smells, hear the sounds,” Mr. Yamagami said. “It’s not like it was before, but I just had that feeling of wanting to be here.”