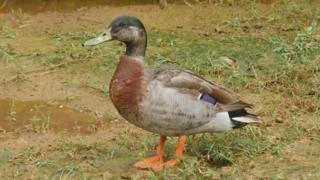 Trevor, once dubbed the world’s loneliest duck, has died after being attacked by dogs on the remote Pacific island he called home.

Trevor was something of a local celebrity in the tiny nation of Niue for being the only bird of his kind living on the island.

He lived in a roadside puddle during his short life, where he was regularly fed and taken care of by locals.

“He showed up in Niue in January last year after a big storm, we think he flew or blew here,” said Rae Findlay, Niue’s Chamber of Commerce chief and the person behind Trevor’s Facebook page.

“He was a mallard duck so we called him Trevor Mallard after a local New Zealand politician, and the name stuck.”

During his short but happy life on Niue, Trevor lived in a large puddle.

“There are no rivers, streams or lakes here, so Trevor chose to live in a puddle,” Ms Findlay told the BBC.

And though he has seen as the world’s loneliest duck, it seemed he was anything but lonely.

Trevor’s puddle was regularly checked on by concerned locals and even the island’s fire brigade, who would fill up his puddle if water levels got too low.

“He regularly flew around to visit locals on their lawns and enjoyed the tasty treats they offered,” said Ms Findlay. “He would be fed peas, corns and oats.”

There were calls by some locals to bring in another duck as his mate, but Trevor’s home was only big enough for one duck.

He did, however, become friends with a rooster, a chicken and a veka – a bird native to Niue – who all lived near the puddle.

“The rooster, chicken and veka were looking a little forlorn today wandering around the near dry puddle,” said Ms Findlay.

“After a year driving around with a bag of oats in my car I will miss the stops on the way to and from work to feed on Trevor. He captured many hearts and he will definitely be missed.”