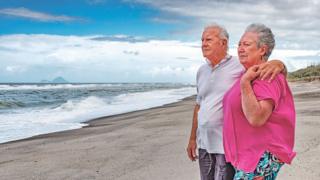 A New Zealand fisherman has rescued an 18-month-old boy from the ocean, in an incident described as a “freakish miracle”.

Gus Hutt, a holiday camper staying on Matata Beach on North Island, was fishing when he spotted a small figure floating in the water.

He first thought it was a doll and only realised it was a child after he “let out a little squeak”.

The boy had escaped from his parents’ tent and ended up in the ocean.

“I thought he was a doll. [Even as] I reached out and grabbed him by the arm, I still thought it was a doll,” Mr Hutt told local outlet the Whakatane Beacon.

“His face looked just like porcelain with his short hair wetted down, but then he let out a little squeak and I thought, ‘oh God, this is a baby and it’s alive’.”

‘It wasn’t his time’

Mr Hutt, who was staying at Murphy’s Holiday Camp, located in the coastal town of Matata, was out on a nearby beach on 26 October at about 06:15 New Zealand time (17:15GMT).

According to the Herald, Mr Hutt would usually head straight from the camp to fish on the beach, but decided on that day to fish at a different spot – 100m to the left.

After checking his fishing lines, he spotted the boy floating in the water.

“He was floating at a steady pace… if I had been just a minute later, I wouldn’t have seen him,” Mr Hutt said.

“He was bloody lucky, but he just wasn’t meant to go, it wasn’t his time.”

Mr Hutt’s wife, Sue, alerted the camp’s staff who informed them that there was only one couple staying with a baby. Emergency services were also alerted.

“Apparently the baby had been very excited to be on the beach. It was the couple’s first night staying here. It’s the first time they’ve been here,” Rebecca Salter, the co-owner of Murphy’s Holiday Camp, told the BBC.

“Hutt, who is a fisherman and one of our regulars, spotted the baby. [They brought the baby to us], we wrapped him up in towels and Sue went to inform the baby’s parents.”

The baby had escaped from his parents’ tent by undoing the zipper, and then made his way into the ocean.

The baby’s mother “screamed” when she was informed that her baby was found in the water – the couple later thanked the Hutts before returning home.

“It came as a shock to everyone. It was a very, very lucky result… it could have been a very tragic incident,” said Mrs Salter. “It’s a freakish miracle.”

Whakatane Police confirmed to the BBC that they attended the emergency, adding that the baby was now “okay”.