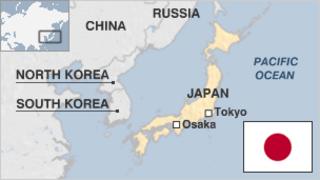 Japan has the world’s third-largest economy, having achieved remarkable growth in the second half of the 20th Century after the devastation of the Second World War.

Its role in the international community is considerable. It is a major aid donor, and a source of global capital and credit.

More than three quarters of the population live in sprawling cities on the coastal fringes of Japan’s four mountainous, heavily-wooded islands.

Japan’s rapid post-war expansion – propelled by highly successful car and consumer electronics industries – ran out of steam by the 1990s under a mounting debt burden that successive governments have failed to address.

Japan’s relations with its neighbours are still heavily influenced by the legacy of Japanese actions before and during the Second World War. Japan has found it difficult to accept and atone for its treatment of the citizens of countries it occupied.

Akihito, who has been emperor since 1989, has no political powers but he has played an important role in working to heal the wounds of a war waged across Asia in his own father’s name.

His father Emperor Hirohito, who reigned between 1926 and 1989, was once revered as divine but transformed after Japan’s defeat to promote peace and democracy.

In 2016, the emperor indicated that he wished to abdicate, out of concern he may become unable to carry out his duties because of old age.

He’s expected to give up his throne in late 2018, when he’ll be succeeded by his elder son, Crown Prince Naruhito.

His focus has been on a series of measures – known as “Abenomics” – aimed at boosting Japan’s struggling economy.

Mr Abe has said he wants to amend Japan’s post-war pacifist constitution, in particular the war-renouncing Article 9 – a goal that has prompted sharp criticism from China. His strong performance in the 2017 elections provided him the political support he needs to change the constitution.

He previously served as prime minister in 2006 and 2007, but quit after a series of scandals involving his ministers.

While the use of online media and social platforms is ubiquitous, the printed press has a very high readership and is highly trusted.

Some key dates in Japan’s history:

1853 – US fleet forces Japan to open up to foreign influence after over 200 years of self-imposed isolation.

1910 – Japan annexes Korea, becoming one of the world’s leading powers.

1914 – Japan joins First World War on the side of Britain and her allies, gaining some Pacific islands from Germany.

1930s – Seizes Chinese province of Manchu, Shanghai, Beijing and Nanjing amid atrocities such as the “Rape of Nanjing”.