‘It’s either cannabis or die’ 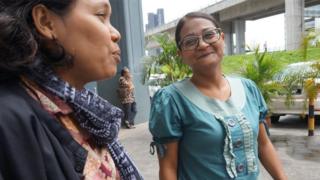 A death sentence given to a young man selling cannabis oil to the ill has stirred debate in Muslim-majority Malaysia about its ultra-tough drug laws. The case has prompted calls for the country to become the first in Asia to legalise medical marijuana – but long-held stigma and a mostly conservative population means change could come slowly.

Yuki describes smoking her first joint as a turning point in her life.

She is willing to risk being thrown in jail rather than give up a drug that she says has worked for her unlike any other.

She first turned to what Malaysians call ganja at 29, after a frustrated Google search in pursuit of something that might help ease chronic, crippling pain from hypokalaemia – or low blood potassium. Beleaguered by a litany of health problems, including diabetes, she decided to try the drug.

It was the early 2000s and public discussion of medical cannabis use was non-existent in Malaysia, a country with some of the world’s harshest drug laws. Cultivating a single cannabis plant at home can land you in prison for natural life, while possession of more than 200g is almost certain to result in a death sentence.

But Yuki, now 41, was desperate to try it. She bought some marijuana and asked her husband to roll her a joint.

“All the pain was gone so finally I could sleep, I slept like a baby,” she said. When she woke up the next morning, she felt her appetite coming back and devoured a meal of curry and rice. She then smoked another joint, and for the first time in a long time, felt up to doing house chores.

“I had two growing kids at that time, one was nine years old, the other was 11. The two of them needed my attention but I could not give it to them because I was so sick,” she said. After years of using opiates to deal with pain caused by her various medical problems, she felt liberated.

More than a decade later, and after several arrests – including one episode in which her entire family, including the children, were held in a jail cell – Yuki has put herself at the forefront of a campaign to reform Malaysia’s drug laws.

She says she’s not scared – for her “it’s either cannabis or die”.

Over the years Yuki has watched friend after friend be put behind bars and even lost her job at an airline as a result of her activism. But the events of recent months have made her and other marijuana advocates feel that they might finally have powerful voices on their side.

It began with a devastating blow – on 30 August – when 29-year-old Muhammad Lukman, a friend of Yuki’s, was sentenced to death.

A few years ago, she had begun using cannabis in the form of oil as an alternative to smoking and Lukman, who sold small dropper bottles of oil for $10 (£8) via a Facebook page called HealTHCcare, supplied it to her. (THC is the main psychoactive compound in cannabis.)

Lukman’s lawyers presented him as a kind-hearted and pious Muslim, who would give away oil to patients who could not afford it – including Yuki. It’s clear that many people felt his product helped them with various ailments, but his page also made some unfounded claims about cannabis’s ability to cure diseases like leukaemia.

Although about 900 others are on death row in Malaysia for drug offences, Lukman’s case prompted an outcry over what was widely seen as a disproportionate punishment.

A petition gathered tens of thousands of signatures and high-profile politicians began to weigh in, including Prime Minister Mahathir Mohamad, who said the case should be reviewed. Nurul Izzah Anwar, an MP with the governing coalition, said it looked to be a “miscarriage of justice”.

Reports then emerged in late September that the cabinet had discussed the medical benefits of cannabis, with one minister saying he was fully behind it.

In October, Yuki and her friends received another surprise. Mr Mahathir’s reform-minded government announced it was going to to abolish the death penalty completely. Suspects convicted for drug trafficking, like Lukman, could however still face jail for decades or life.

Medical cannabis – what the research says

Lukman’s case is not the only one the activists are watching. Mohammed Zaireen bin Zainal, the founder of the Malaysian Marijuana Education Movement, is also on death row and awaiting a final appeal. A 58-year-old ex-military captain known as “Dr Ganja”, who treated himself and others with cannabis oil, is awaiting trial.

Samantha Chong, Dr Ganja’s lawyer, said that as a former prosecutor, she has seen first-hand that the draconian laws are not working. “I kept on seeing the same accused person coming for drug offences. [We would] put them in jail or give them a fine but they would keep coming back.”

Malaysians like her who advocate drug policy reform feel that international momentum is on their side. They recently watched Canada and South Africa legalise the drug completely.

In the US, medical cannabis is legal in 31 states. And since 1 November, cannabis products have been available on the UK’s National Health Service for certain patients.

In the region, India and Thailand have both signalled that they could liberalise laws around medical marijuana products.

The World Health Organization is currently conducting a “critical review” of cannabis to decide if the drug’s strict scheduling next to cocaine and heroin under decades-old international drug control conventions is appropriate. It could pave the way to revisions of UN conventions which underpin tough drug laws around the world, says Professor Iain McGregor of the University of Sydney’s Lambert Initiative for Cannabinoid Therapeutics.

But for those changes to happen it will require “a lot of the Muslim countries that are traditionally quite strongly anti-drug” to change their positions. “And I wonder if Malaysia”, he added, “will now act as a key opinion leader amongst that cluster of countries to implement change.”

Documents seen by the BBC confirm that both Prime Minister Mahathir and Health Minister Dr Dzulkefly Ahmad have been in contact with the organisers of a privately-funded project involving Malaysian and Indian researchers looking at the potential for medical cannabis to treat depression. And Nurul Izzah Anwar, the MP, says she has begun drafting a bill to present in parliament.

However it’s unclear how soon any major legal reforms could occur. Law Minister Liew Vui Keong insisted that the government had “not come to any conclusion with regard to the use of marijuana for medicinal purposes” but added that he would be willing to review the evidence available and based on that possibly make a recommendation that the laws be changed.

For Yuki, legalisation – at least for medical use – can’t come fast enough. A regulated market, she and other advocates say, would allow ill people who already use cannabis in the shadows to access safer products.

“If you are desperate, you are sick, you will do anything,” she says. “We go online, we search about it, we find out about it. The government doesn’t want to give it to us but we will still find it.”