In Australia, a New Look at Immigration: ‘It’s About Our Friends’

MELBOURNE, Australia — The 3-year-old girl was born in Australia, in a tiny town called Biloela, far from the big cities of Sydney and Melbourne. But her parents were asylum seekers from Sri Lanka and living in a country that heavily discourages illegal migration, so the government sent them to a faraway island while deciding their fate.

This week the girl, Tharnicaa Murugappan, returned to mainland Australia, but not for the reason her family had hoped — she was medically evacuated to Perth, where she is now battling a blood infection in a hospital after a lengthy illness. Supporters of the family say she was given only painkillers for nearly two weeks at the remote government detention facility while her fever rose, and she now suffers from pneumonia, which led to her blood infection.

Tharnicaa and her family, often called the “Biloela family” among Australians, are the most high-profile asylum seekers in Australia. In a country that is inured to criticism from international human rights organizations over its “draconian” immigration policy, the detentions of Tharnicaa and her older sister have drawn outrage.

Tharnicaa’s illness has renewed calls for the family to be released from detention and prompted candlelight vigils and protests across Australia. Over half a million people have signed a petition demanding the family be returned to Biloela, a town of about 5,800 that is 260 miles northwest of Brisbane. Politicians from both sides have called for the family to be released from detention while maintaining support for the hard-line immigration policies that put them there. Karen Andrews, the home affairs minister, has been so inundated with calls about the case that her voicemail specifies that anyone wanting to speak to her about it should do so in writing.

The Murugappan family — mother Kokilapathmapriya Nadesalingam, father Nadesalingam Murugappan, Tharnicaa and her 5-year-old sister, Kopika — are the only people held in the Christmas Island detention center, which is 1,000 miles north of the Australian mainland. The two sisters, who both were born in Australia, are the only two children currently being held in immigration detention in Australia. Unlike the United States, Australia does not automatically grant citizenship to children born in the country, and the two girls are ineligible as the children of “unlawful maritime arrivals.” 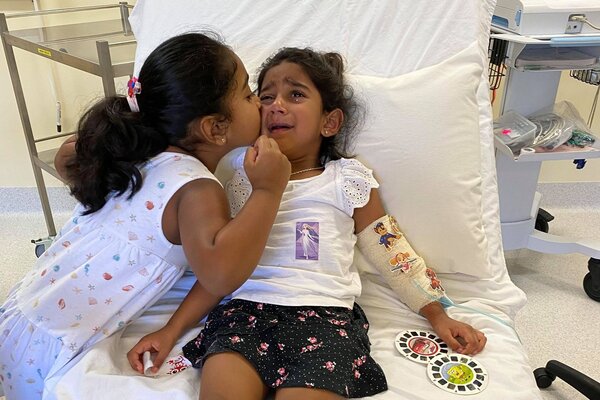 The case is unusual in that the small rural town of Biloela, which has been leading the fight to get the family back, is a politically conservative place. But when the family was whisked away by immigration officials in 2018 after their claims for asylum were rejected and their temporary visas expired, locals weren’t thinking about politics. This case “wasn’t about politics or asylum seekers, it was about our friends,” said Simone Cameron, a Biloela local and friend of the family.

The family has been held on Christmas Island since 2019, as they fight government efforts to deport them to Sri Lanka.

Late last month, supporters of the family said, Ms. Nadesalingam and Mr. Murugappan started raising concerns with International Health and Medical Services, the private company that provides health care for the Christmas Island detention center, after Tharnicaa developed a fever on May 24. Requests for antibiotics were ignored, and the family was only given over-the-counter painkillers and a fact sheet about common flu symptoms, even as her fever increased and she started vomiting.

Tharnicaa was hospitalized on Christmas Island on June 6, according to the supporters. The next day, she was evacuated, along with her mother, to a hospital in the mainland city of Perth. She is recovering, but doctors are still trying to find the cause of the infection.

“It was the pure negligence of them not actually giving Tharnicaa antibiotics that led to her developing pneumonia,” a family friend, Angela Fredericks, said in a phone interview on Thursday. She added that the family had to “beg and fight” for Tharnicaa to be evacuated to the mainland.

In previous statements, Home Affairs Minister Karen Andrews has defended Tharnicaa’s treatment, saying she was evacuated to Perth as soon as it was recommended. International Health and Medical Services did not respond to requests for comment.

Tharnicaa’s’ parents belong to Sri Lanka’s Tamil minority and fled violence in their homeland, where a civil war raged for decades before ending in 2009. Mr. Murugappan arrived in Australia via a boat in 2012 and Ms. Nadesalingam in 2013, and both obtained temporary visas that let them live in Biloela, where they met, married and had the two girls.

Their claims for asylum have been rejected on the grounds that Mr. Murugappan has been able to travel back to Sri Lanka three times and that the war in Sri Lanka has ended, meaning the risks they faced have decreased. After Ms. Nadesalingam’s temporary visa expired in 2018, the family was sent to an immigration detention center Melbourne, then flown to Christmas Island in 2019, where they are the only detainees at the facility, built to house 400 people. The government has twice tried to deport them.

The government has repeatedly said that allowing the family to remain will encourage other asylum seekers and smugglers to try to reach the country by boat — an often deadly journey.

But that “doesn’t mean that we keep two children locked up to just make a point,” said Carina Ford, the family’s immigration lawyer.

“They’re no threat to our sovereignty,” Anthony Albanese, the leader of Australia’s opposition Labor Party, said at a news conference on Thursday. “Our sovereignty isn’t diminished by looking after these young girls, who were born here, and their mom and dad.”

Supporters continue to call on the government to use ministerial discretion to allow the family back into the community. “They had a lovely peaceful life in Biloela and they could do again tomorrow if the powers that be decided that,” said Ms. Cameron, the family friend.

Tharnicaa will turn 4 on Saturday, most likely at the hospital. It would be her fourth birthday in detention.