‘Find Him and Kill Him’: An Afghan Pilot’s Desperate Escape

KABUL, Afghanistan — The Asadi family was up before dawn Tuesday after a fitful night’s sleep.

They dressed quickly in new clothes bought the day before and tucked a few precious belongings into two suitcases and two backpacks.

Maj. Naiem Asadi was about to make the move of a lifetime — one that would separate his family from their loved ones and the only country they’ve ever known. As he and his wife, Rahima, zipped their luggage, they worried that unforeseen obstacles would block the path to their final destination.

The decorated Afghan Air Force helicopter pilot had been in hiding with his wife and daughter, Zainab, 5, for seven months. The Taliban had threatened his life, posting Major Asadi’s photo online with the instructions “Find him and kill him,” he said.

On top of being a pilot, he is Hazara, a member of an ethnic minority that has been repeatedly attacked by the Taliban and the Islamic State in Afghanistan. Major Asadi said even air force commanders often discriminated against him because of his ethnicity.

There was more: His commanders were furious that he had been absent without leave since last fall. They had repeatedly ordered him to report for duty, but he refused.

“I worried that they would never allow me to leave because then every pilot would want to go to the U.S.,” he said in lightly accented English.

But now, Major Asadi, 32, a farmer’s son, a graduate of Afghanistan’s military officer academy, and by many accounts the Afghan Air Force’s leading killer of Taliban fighters, was leaving his native country, probably forever. 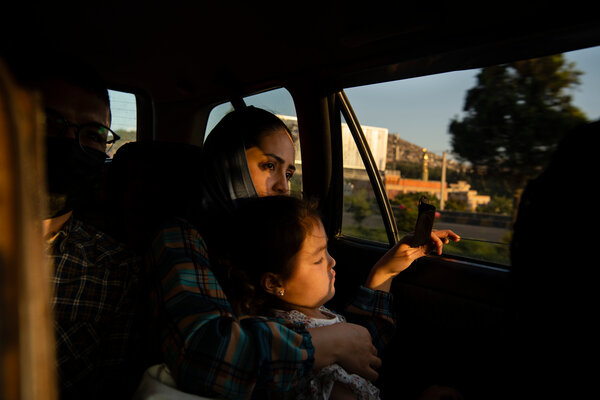 In the pale morning light in Kabul, the pilot held three dark-green Afghan passports. Inside each was a full-page stamp bearing an image of Abraham Lincoln that would carry them to the United States: “Holder has been granted parole authorization by USCIS for one year,” it read.

An American lawyer had helped the family obtain humanitarian parole — a little-known authorization by the U.S. Citizenship and Immigration Services to enter the United States for a year — but only after the U.S. military abruptly revoked a similar refugee application that was initially approved in October, as first reported by Stars and Stripes.

The pilot’s application last fall “was found to have not been fully vetted” by the Department of Defense, leading to the department to withdraw its support, Maj. Robert Lodewick, a Pentagon spokesman, said in a statement.

The Defense Department “would have been in the position of abetting the desertion of a serving Afghan officer as Major Asadi had not informed his chain of command of his parole application,” Major Lodewick said.

“It’s a pity. He did this to escape from serving his homeland,” said Lt. Col. Jalaluddin Ibrahimkhel, an Afghan Air Force spokesman, adding that others were now more likely to “make excuses and escape.”

With the Afghan Air Force struggling to support ground troops as U.S. forces withdraw air support and essential flight mechanics, Major Asadi’s furtive escape raised an elemental question: If the country’s ace attack helicopter pilot was permitted to walk away from his post, what were other Afghan pilots — and other soldiers — to think?

Many pilots and soldiers have been threatened by the Taliban. Most can only dream of relocating their families to the United States.

Major Asadi conceded that his actions could undermine air force morale, but he said he acted to protect himself and his family. He said he ignored orders to report for duty because he feared he would be detained for desertion.

But he said he had fulfilled his 10-year commitment to the military last year — serving eight of those years as a pilot, logging 3,000 flight hours and countless combat missions. “I haven’t done anything wrong,” he said.

To those he served with, he was a hero.

Air Force Capt. Robert V. Yost wrote that in July 2020 Major Asadi flew one of two armed MD-530 helicopters that protected the crash site of a downed U.S. Air Force pilot in northern Afghanistan until he was rescued.

“This is one of countless events where Major Asadi’s actions have protected and saved lives,” Captain Yost wrote in a statement included with the pilot’s 2020 application.

In the same application, an assistant secretary of defense, Ezra Cohen, wrote of Major Asadi: “Applicant and his family are in imminent danger of being killed by the Taliban.”

After their application was revoked in October, the family’s passports were delivered to the U.S. military, said Kimberley Motley, a North Carolina-based human rights attorney. Frightened, Major Asadi called a friend, who arranged for the family to live at Bagram Air Base, an American facility.

They kept a low profile. American service members helped feed and care for them, Mr. Asadi said. They showered Zainab with toys and stuffed animals.

In early December, Ms. Motley said, American commanders ordered the family to leave. She said she persuaded the military to return the family’s passports. The Asadis then went into hiding at a safe house in Kabul.

“We just prayed and prayed to somehow be able to go to the U.S.,” Major Asadi said. The family rarely went out, fearing that someone would report them to the Taliban, who he said had told him, “The U.S. cannot protect you.”

On Tuesday morning, Major Asadi and Rahima, both wearing new plaid shirts and jeans, piled into an S.U.V. bound for the Kabul airport. Zainab, clutching a pink rose, hopped inside, her ponytail bobbing.

An airline official accepted documents showing that the Asadis had tested negative for the coronavirus the day before. Then an immigration officer in a glass booth used a magnifying glass to examine all three stamps before ultimately letting them pass.

Ms. Motley said she secured the Asadis’ second humanitarian parole last month, without seeking endorsement from the Pentagon. On Tuesday, she accompanied the family from Kabul to Dubai and on to New York — and a new life in America for the family.

Major Asadi’s American sponsor, who requested anonymity to help safeguard the precise location of the Asadis in the United States, has offered housing in New Jersey and has paid travel expenses, Ms. Motley said. A dozen former and active U.S. military advisers who worked with Major Asadi have pledged support. Once in the United States, the family will be able apply for asylum.

From the plane, Major Asadi telephoned his father in Ghazni Province in southeastern Afghanistan to reveal that he was flying to the United States. Last year, the Taliban wrote and phoned his father and ordered him to surrender his son or face death, according to a copy of the letter attached to the 2020 parole application.

Now, as the father learned that the family was on its way to safety, he wept and hung up.

Major Asadi is not the first well-known Afghan pilot to flee Afghanistan for America.

Niloofar Rahmani, 28, Afghanistan’s first female fixed wing-pilot and Mr. Asadi’s flight school classmate, was granted asylum in 2018 after she was threatened by the Taliban and by some extended family members. The Afghan Air Force accused her of lying and asked the United States to reject her asylum application.

“You have to choose between your family or your dream — your career,” she said. “God forbid something happened to him. Who would protect his family then?”

Major Asadi wanted Zainab to attend American schools and learn English. Ms. Asadi said she had been practicing her English: “Good morning,” and “Hi, how are you?” Ms. Asadi recited.

Zainab said she was eager to play with the sponsor’s family dog, which she had seen romping around during a video call.

By Tuesday night, the Asadi family was struggling to sleep on padded seats inside modern, gleaming Dubai International Airport. They had never traveled outside Afghanistan or flown on an international flight.

Ms. Asadi and Zainab encountered an escalator for the first time. The girl rode the stairs with delight, but her mother stumbled.

On Wednesday afternoon, their Emirates Airline flight landed at J.F.K. Airport in New York. The Asadis were ushered into a meeting with immigration officers, without their lawyer, but were granted entry 45 minutes later.

The family walked outside onto American soil, weary but elated. “I’m really not so tired because of all the new and beautiful things we’ll be doing now,” Major Asadi said.

During the long plane ride, he released emotions that had been welling inside him for months. In neatly printed English, he wrote a two-page letter of gratitude to everyone in the United States and Afghanistan who had helped them.

He wrote: “Your ambition is like a roaring sea and running water and your kindness is as high as the sky and the vastness of the earth.”