LONDON (Reuters) – European shares fell back on Monday, after rebounding at the end of last week, as lingering worries about the euro zone economy, Brexit and the U.S. government shutdown offset hopes for a truce between Washington and Beijing over trade. 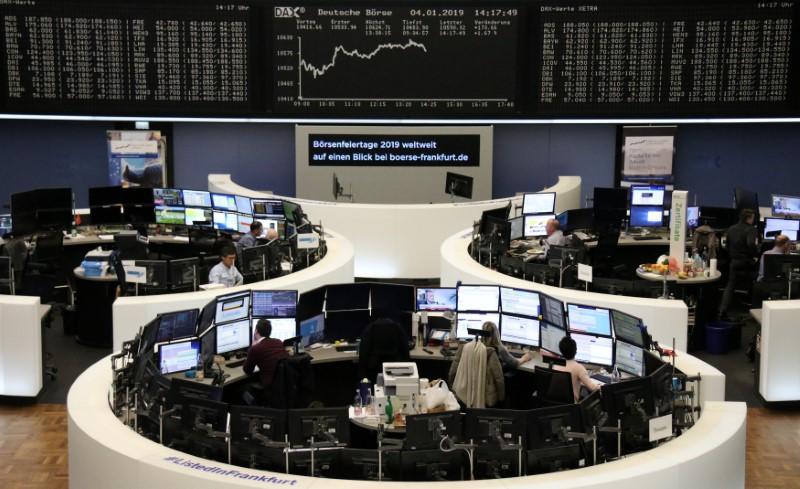 The pan-European STOXX 600 index closed down 0.15 percent, erasing some of Friday’s stellar gains after strong U.S. jobs data and dovish comments from the Federal Reserve chief.

Optimism about easing friction between the United States and China had also lifted the mood, helping the index to its biggest daily gain since June 2016.

The swift swing into negative territory on Monday morning illustrated the fragility of the gains as other worries returned to the fore.

The biggest gainers in Friday’s strong rally were some of Monday’s laggards, with healthcare .SXDP and food and beverage stocks SX3P falling 0.8 and 1.1 percent respectively. The weaker U.S. dollar also weighed on those companies with large international revenues.

On Friday, Fed chair Jerome Powell said the U.S. central bank was not on a preset path of interest rate hikes and that it would be sensitive to the downside risks markets were pricing in.

“We’re not seeing the overheating of the U.S. economy that we were worried about,” said Kreckel.

On Friday, Bank of America Merrill Lynch’s “Bull & Bear” gauge of market sentiment had fallen to 1.8, a level the U.S. bank’s strategists described as “extreme bear” territory that had triggered a “buy” signal for equities.

Sectors sensitive to the trade tensions were among the few gainers on Monday, with basic resources stocks .SXPP up 1 percent and technology up 1.5 percent.

AMS (AMS.S) which supplies the iPhone maker, rose 9.6 percent to the top of the STOXX 600 after announcing a partnership with Chinese software maker Face++ to produce new 3D facial recognition features for smartphones.

“Face++ is considered a very solid software platform for 3D sensing and for hardware company like AMS the bottleneck is partly software and the partnership helps them to close this gap,” said Veysel Taze, analyst at ODDO BHF.

AMS shares lost almost a quarter of their value on Thursday.

On the downside, Centrica (CNA.L) fell 4.4 percent after a Jefferies downgrade.

The bank said it reckons the European autos are unlikely to re-rate in the first half of the year.