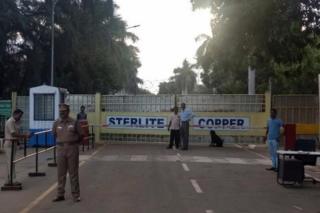 India’s Supreme Court has ordered the reopening of a copper smelter that was shut down because of the environmental damage it was allegedly causing.

The plant in the southern port city of Tuticorin was closed in May after police killed 13 people amid protests by residents.

They said the smelter was polluting ground water in the area and threatened the fishing industry.

India’s environment court had cleared the plant’s reopening in December.

But the state government of Tamil Nadu had appealed against the decision in the Supreme Court.

The plant, Sterlite Copper, is a subsidiary of the UK-based Vedanta conglomerate. Protests demanding its closure had been going on for months by the time it was shut in May.

But no-one had reportedly been working in the plant for nearly two months before that.

The company’s operational licence had expired in April and the company was waiting for the government to renew it.

The state pollution control board also disconnected electricity supply to the plant, alleging that it had failed to adhere to certain agreed upon environmental conditions.

But Vedanta had denied the allegations.

This isn’t the first time Vedanta’s plans have sparked protests over environmental pollution.

In 2010, the Indian government had rejected the company’s bid to mine bauxite in the eastern state of Orissa.

The company had said the proposed $2.7bn investment in the area would bring jobs and development to one of India’s poorest districts. But local tribespeople objected, saying the mining project would destroy their sacred hill and their source of livelihood.