President Trump has invited Democrats to a briefing at the White House today. We’re also looking at a warning from North Korea’s leader and the outlook for stocks after a rocky 2018.

Democrats seek to drive the agenda

The Democratic Party takes control of the House this week, representing the first taste of a divided government, with the Senate and White House under Republican control.

Representative Nancy Pelosi, who is likely to be elected speaker on Thursday, said her first order of business would be reopening the government, part of which has been shut for 12 days after a spending impasse over funding for a border wall. Ms. Pelosi has said the wall can’t be part of any deal.

President Trump has invited congressional leaders of both parties to a briefing on border security today. It would be Democratic leaders’ first visit to the White House since Dec. 11, when the president said he would be “proud to shut down the government for border security.”

Yesterday: American border officers used tear gas to drive away about 150 migrants trying to cross the border from Mexico, the authorities said.

The Daily: Today’s episode discusses what Democrats plan to do with their new House majority. 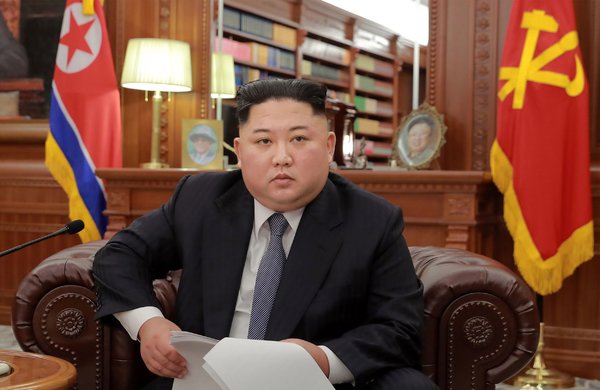 Kim Jong-un said on Tuesday that he was willing to hold a second summit meeting with President Trump, but he added that if international sanctions were not lifted, the North would “have no choice” but to return to nuclear confrontation.

“We will not make nuclear weapons and we will not proliferate nuclear weapons,” Mr. Kim said during a New Year’s Day address. But he added that it “won’t be good” if the U.S. doesn’t make “corresponding measures.”

News analysis: Mr. Kim has essentially returned to where things stood when Mr. Trump took office, indicating that their meeting in Singapore in June altered the optics of their relationship more than the reality. Read more from our national security correspondent.

Joe Biden paves the way for a possible run

The former vice president is expected to reveal early this year whether he plans to make a third bid for the presidency.

In the two years since leaving office, Mr. Biden has made millions of dollars through a book deal and selective speaking engagements. But by setting tight restrictions on such activities, he appears to be trying to prevent a backlash like the one Hillary Clinton experienced in 2016 for earning millions by speaking to private groups. Our reporters detailed the decisions that position Mr. Biden as a Democratic contender in 2020.

Catch up: Senator Elizabeth Warren, the Massachusetts Democrat, entered the 2020 presidential race on Monday, becoming the first major candidate in what is likely to be a crowded primary.

Explainer: Yes, 2019 just started, but Democrats are already looking ahead to 2020. We look at the questions facing the party as it prepares to confront President Trump.

Notable: Mitt Romney, the incoming senator from Utah and a former Republican presidential nominee, said in an op-ed essay in The Washington Post that Mr. Trump “has not risen to the mantle of the office.”

Investors are wary after a rocky 2018

Stocks suffered their worst annual decline in a decade last year, but the hope on Wall Street is that the U.S. economy is still sound.

The S&P 500 ended 2018 down 14.5 percent from its high point, avoiding the 20 percent threshold that signals a bear market. Our reporters looked at some major factors that could affect the markets this year, including rising interest rates and President Trump’s Twitter feed.

Another angle: Trade talks between the U.S. and China are set to begin this week in Beijing. The American side is being led by Robert Lighthizer, a China skeptic who has said he wants to prevent Mr. Trump from making a quick, empty deal in order to calm the markets.

If you have 7 minutes, this is worth it

Big Tech is just getting started

Silicon Valley giants spent much of 2018 being accused of inflaming, radicalizing, dumbing down and squeezing the masses. Tech stocks have been pummeled. Even some tech executives are calling for regulation.

Slower withdrawal from Syria: President Trump will give the military about four months to pull 2,000 U.S. troops from Syria, after facing criticism for saying the departure would happen within 30 days.

Chinese leader’s warning to Taiwan: Armed force could be used to stop Taiwan from asserting independence, Xi Jinping said in his first major speech about the island.

At the edge of the solar system: After a journey of more than four billion miles, NASA’s New Horizons spacecraft reached a small, icy world nicknamed Ultima Thule (pronounced “TOO-lee”). It’s the most distant object visited by humankind and may provide clues about the origin of the sun and planets.

Cuomo’s new tone: Gov. Andrew Cuomo of New York was sworn in for his third term on Tuesday, in a ceremony on Ellis Island. He criticized the federal government, saying it had “sought to demonize our differences and make our diversity our greatest weakness rather than our greatest strength.”

Snapshot: Above, Serena Williams and Roger Federer faced off for the first time on Tuesday, in a mixed doubles match at the Hopman Cup in Australia. Federer and his partner, Belinda Bencic, beat Williams and Frances Tiafoe in an abbreviated format match by the score of 4-2, 4-3 (5-3).

Cook: Chicken with sweet potatoes and fennel, mixed on a sheet pan and drizzled with a zingy vinaigrette of pecorino, cracked pepper and lemon.

Listen: Classical music podcasts are hard to find. “Aria Code” is a new one from WQXR and the Metropolitan Opera, hosted by the musician Rhiannon Giddens. Our critic calls the deep dives into famous arias “eminently listenable and often illuminating.”

Read: Our co-chief film critic Manohla Dargis explores how #MeToo influenced her work in the past year. “It’s not that I’m noticing sexism more; I always noticed,” she writes. “It’s that I’m not gliding over the insults and insinuations, the snickering and unmotivated female nudity as easily — as resignedly — as I sometimes did.”

Watch: The director Rob Marshall breaks down a dazzling sequence mixing animation and live-action in “Mary Poppins Returns.” (And if you want more, check out our interview with Dick Van Dyke.)

Smarter Living: Science can help you make all the changes you want to make in 2019. For instance, focus on an overarching intention (say, reducing stress) rather than a particular habit. That way, if meditation doesn’t work out, you can move on to yoga or other correctives.

We also have tips for saving time in the kitchen, so you can spend more at the table.

The gig economy has been with us for years now, but the word “gig” long preceded it.

The first definition of “gig,” meaning a “flighty girl,” goes back to the 13th century.

The word is also present in fishing, where the use of a short-handled spear to catch small fish is called “gig fishing.” The spear — a gig — is thought to be derived from the defunct “fizzgig,” which eventually became “fish-gig.” Frogs can also be “gigged.”

Early 20th-century jazz musicians popularized “gig” as a one-time engagement to play. That is the usage thought to have inspired the meaning of temporary (and often benefit-free) work.

Some of us just use it to mean “job.” And with that, this reporter is off to her day gig to write about The Times crossword.

Thank you
To Aisha Harris for the cultural guidance and Kenneth R. Rosen for the Smarter Living ideas. Deb Amlen, our Wordplay columnist, wrote today’s Back Story. You can reach the team at [email protected]

P.S.
• We’re listening to “The Daily.” Today’s episode is about what the Democrats plan to do in the new Congress.
• Here’s today’s mini crossword puzzle, and a clue: The 2 percent in 2 percent milk (3 letters). You can find all our puzzles here.
• The Times’s science team created a timeline of space events that you can sync to your Google or iOS calendar.

Chris Stanford is based in London and writes the U.S. version of the Morning Briefing. He also compiles a weekly news quiz. He was previously a producer for the desktop home page and mobile site, helping to present The New York Times’s news report to readers. Before joining The Times in 2013, he was an editor and designer at The Washington Post and other news organizations. @stanfordc