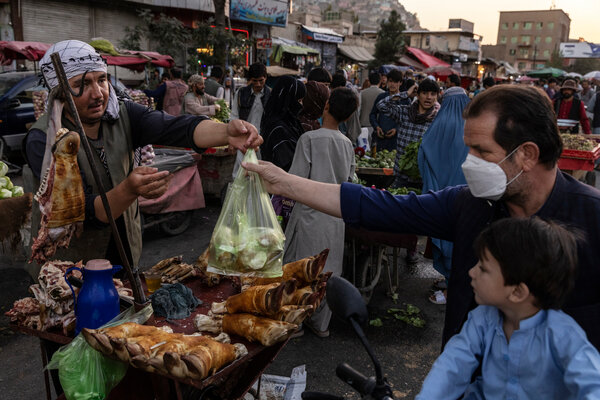 A ‘most perilous hour’ for Afghan children

Millions of Afghans, including a million children, are at risk of starvation and death amid a “most perilous hour,” António Guterres, the U.N. secretary-general, warned at a conference addressing Afghanistan’s humanitarian crisis.

The World Food Program estimates that 40 percent of crops have been lost during a severe drought. The price of wheat has gone up by 25 percent, and hundreds of thousands of people have been made homeless after being forced to flee fighting. The country’s health care system is teetering on the edge of collapse.

More than $1 billion in aid pledges were made at the meeting by the international community, which is still grappling with how to work with an organization like the Taliban, with a history of brutality and human rights abuses. World Bank funding is presently frozen, threatening an effective end to medical services in 31 of Afghanistan’s 34 provinces.

Related: Albania is housing several hundred Afghan refugees in beach resorts on the Adriatic coast in what are perhaps the world’s most luxurious refugee shelters. “We don’t put people in camps,” Edi Rama, the prime minister, said. “They are dehumanizing and where all the problems start psychologically.”

A new review by an international group of vaccine experts has argued against offering coronavirus booster shots for the general population, days before an advisory committee in the U.S. is set to vote on whether the F.D.A. should approve additional doses of Pfizer-BioNTech’s vaccine for people 16 and up.

Many scientists have opposed the plan, however, saying the vaccines continue to be powerfully protective against severe illness and hospitalization. The review included a compendium of dozens of studies from around the world that shows such a trend.

Global effects: The W.H.O. has asked wealthy nations to hold off on administering more shots to healthy patients until every country has had the opportunity to vaccinate at least 40 percent of its population. Every unvaccinated person provides an opportunity for the virus to morph into new, potentially dangerous variants, scientists have warned.

France’s vaccine pass system seems to be working. Fears about a potential hit to the country’s economy have not materialized.

Making improvements to ventilation, adding portable air cleaners and simply opening windows can lower the risk of infection in the workplace. Here’s what to ask for.

Norway’s center-left opposition decisively won in a general election, after a campaign dominated by climate change and the growing contradictions between Norway’s environmental aspirations and its dependence on its vast oil and gas reserves.

The vote came at the end of a tumultuous summer in Europe, marked by scorching temperatures and flooding in many countries. Once a distant prospect for many Norwegians, global warming has become a more tangible reality that all political parties in the wealthy Nordic nation of 5.3 million could no longer ignore.

Though smaller Norwegian parties with the most aggressive stance toward fossil fuels fared less well than expected, the vote offered evidence that the climate issue may be shifting the balance of power to the left in some European countries, among them Germany, which is holding its own election in just two weeks.

Other climate news: The Biden administration and the airline industry have agreed to replace all jet fuel with sustainable alternatives by 2050. But depending on the type of alternative fuel, using billions of gallons of it could hurt, not help, the climate.

Businesses in Britain are struggling to fill positions across nearly every occupation, presenting a new risk to the pandemic recovery.

The sole survivor of a cable car crash in Italy, a 6-year-old boy whose parents died in the accident, is at the center of a bitter custody dispute.

North Korea said it had launched newly developed long-range cruise missiles over the weekend. The missiles flew more than two hours and hit targets 932 miles away, according to the government.

The first parents to face trial in the Operation Varsity Blues scandal in the U.S. argued that a college admissions consultant had duped them.

Abortion is no longer illegal in Mexico. But another battle looms over whether public hospitals will be required to offer the procedure.

Iran may soon have enough material to fuel a single nuclear weapon, crossing a threshold that may raise pressure on the U.S. and its allies to improve the terms of a potential deal to restore the 2015 nuclear agreement.

At the Met Gala last night, stars presented their own unique visions of what “American fashion” means now. Above, the singer and gala co-chair Billie Eilish, who wore an Oscar de la Renta gown on the condition that the label terminate all fur sales. See more gala coverage here.

Apple issued emergency updates after an Israeli spyware company managed to infect some phones and computers.

Physicians are raising awareness of the toll on doctors’ fertility that work stress, long hours, sleep deprivation and years of training can exact.

With $15 million in private funding, a company called Colossal is aiming to bring thousands of woolly mammoths back to Siberia, thousands of years after they went extinct.

But some researchers remain deeply skeptical of the plan. And if the start-up is successful, it will face serious ethical questions. Is it humane to produce animals whose biology we know so little about? And who gets to decide whether they can be set loose, potentially to change the ecosystem in profound ways?

When Wes Anderson comes to town

To make “The French Dispatch,” Wes Anderson’s forthcoming film, producers set up shop in a real French city, Angoulême, to create the setting for the movie’s fictional one, named Ennui-sur-Blasé.

The result, Mekado Murphy reports for The Times, is a “stylized version of France that highlights the director’s whimsical passions,” with the picture-book-perfect symmetry long associated with Anderson’s aesthetic. It’s something like Paris — but not a Paris that exists outside cinema.

The hunt for the ideal French city, with “nooks and crannies, corridors, passages, staircases, layers and ramparts,” as the producer Jeremy Dawson puts it, began online, before an in-person search of promising locations. While in Angoulême, a southwestern town of about 42,000 people, Anderson suggested grabbing lunch at a cafe in a small plaza. “When he said that, I knew he’d picked this town,” Dawson said.

During the shoot, the crew looked to give Angoulême’s old-world buildings, streets and facades an Anderson-ized touch — a cute little vintage vehicle parked here, a peppy striped awning set up there. Miniatures were sometimes used to help enhance the setting.

Read more about the process.

In the age of Google, consider reaching for a physical dictionary instead.

How to be happy.

And here is the Spelling Bee.

That’s it for today’s briefing. See you tomorrow. — Natasha

The latest episode of “The Daily” is on U.S. vaccine mandates.

You can reach Natasha and the team at [email protected].