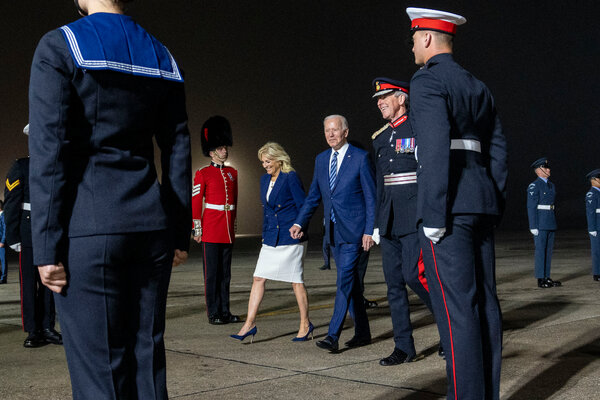 As he prepares to meet with European leaders over the next week, President Biden will try to rally an alliance shaken by the previous administration, in which Donald Trump disparaged and unwound traditional relationships as he embraced autocrats like Vladimir Putin of Russia.

Biden arrives in Europe with considerable good will simply by not being Trump. But as the oldest U.S. president in history, he cannot escape lingering doubts about his durability. And he has a daunting agenda: resurrecting a shaken relationship; coaxing European partners toward coordinated policies on Russia, China, global warming and the coronavirus; and then confronting Putin.

The U.S. and the E.U. are also working toward an agreement that would settle long-running disputes over subsidies and tariffs that set off a trade war during the Trump administration. Both sides are hoping to reach a settlement by July.

Analysis: “In a world where the West is comparatively smaller and less economically dominant, Biden argues that allies who share the same view of global order should stick together,” says Steven Erlanger, our chief diplomatic correspondent in Europe.

A Russian court yesterday designated Aleksei Navalny’s opposition political movement as extremist, sending a strong message to President Biden ahead of his meeting with President Vladimir Putin next Wednesday in Geneva: Russian domestic affairs are not up for discussion.

Though Biden has promised to push back against Putin’s violations of international norms, the Russian president has said that while he is prepared to discuss cyberspace and geopolitics, he will not engage in talks over how he runs his country.

Putin has dismantled much of what remained of Russian political pluralism. Navalny, his main opponent, was arrested in January; thousands of Russians have been detained at protests; leading opposition politicians have been jailed or forced into exile; online news media outlets have been branded “foreign agents”; and social media networks have come under government pressure.

Effects: The court decision is expected to push the resistance to Putin further underground. Under the law, Navalny’s organizers, his donors, or even his social-media supporters could now be prosecuted and face prison time.

For the many Germans who have not yet been vaccinated, the key to Covid freedom — hotel stays, indoor dining, trips to the gym — is a negative rapid test that is no more than 24 hours old.

Sites across the country, including abandoned cafes and nightclubs, have rapidly been converted into 15,000 pop-up testing centers, while schools and day care centers administer rapid antigen tests to children at least twice a week. The testing system, which is funded by the government, aims at finding potentially infectious people before they can spread the virus.

Early signs: “We see that the infection rate here is dropping faster than in other countries who have similar vaccination numbers,” said Ulf Dittmer, a virologist in the western city of Essen. “And I think a part of that has to do with widespread testing.”

The U.S. has reached a deal to provide 500 million doses of the Pfizer-BioNTech coronavirus vaccine to about 100 countries over the next two years.

France, where the coronavirus situation has improved in recent weeks, is beginning its third phase of a gradual reopening, including the resumption of indoor service in bars, cafes and restaurants and moving a 9 p.m. curfew to 11 p.m.

A new outbreak in the southern province of Guangdong suggests that the lockdowns, quarantines and mass testing that have become part of Chinese life may continue for some time.

President Biden revoked a Trump-era order that sought to ban the app TikTok.

At least 10 people were killed and 16 others wounded in an attack on staff members of the HALO Trust, a British-American charity that clears land mines in Afghanistan.

Canadians called for action against Islamophobia in the wake of the murder of a Muslim family in Ontario.

An appeals court in France ruled in favor of three former high school students who said they had been subjected to racial discrimination during ID checks in Paris in 2017.

The UEFA Euro 2020 soccer tournament, delayed by the pandemic, will sweep across the continent into July. We looked back on the most memorable moments in the tournament’s history. Above, the 1988 final in which Ruud Gullit, left, and Marco van Basten, center, scored to give the Netherlands a 2-0 victory over the Soviet Union.

The company behind the Keystone XL oil pipeline has canceled the project, which had been opposed by environmentalists for years.

After enduring sexual abuse by a high school tennis coach, a California lawyer has made a career of finding justice for others who experienced similar trauma.

No city in America has experienced more death or economic devastation in the pandemic than New York. But the disparity in the suffering between white New Yorkers and Black and Latino New Yorkers revealed another, more intractable crisis: the ever-growing inequality that had come to define every aspect of life in the city.

Six months after its first coronavirus inoculation, New York has another shot at addressing its long-term failures. But if a different future is possible, it will begin with what the city does with its real estate and its schools.

She’s an 18-year-old pop star with two hit singles and the biggest debut album of the year. She’s performed at awards shows and been lauded by Taylor Swift. But less than a year ago, you’d probably never heard of Olivia Rodrigo.

Though Rodrigo grew up in entertainment, starring in a “High School Musical” spinoff on Disney+, she found mainstream fame in January with the release of her blockbuster single, “Drivers License.” Her album, “Sour,” built on that momentum. It’s a searing breakup record, co-written by Rodrigo, that’s full of rage and generational angst. There are pop-punk songs reminiscent of Avril Lavigne and Paramore, and detail-heavy lyrics inspired by Swift.

“It’s moody, poppy, punky, bratty, funny, sweet, sad, and speaks to the crushing feelings of being alive and being in unrequited love,” Scaachi Koul writes in BuzzFeed News.

Rodrigo’s popularity isn’t limited to Gen Z; older listeners (and critics) have embraced her music. Lindsay Zoladz, writing for NPR, says her teenage self would have been skeptical of Rodrigo’s Disney pedigree. But, she adds, “in the end I have to think I would have been pulled in by the oceanic undertow of her music’s subjectivity, an exquisitely detailed, deeply felt, young girl’s perspective.”

For more: Music critics go deep on Rodrigo’s success in the latest episode of “Popcast.”

Riffing on a Spanish tortilla, this omelet from the chef Ferran Adrià uses only eggs, salted potato chips and olive oil and comes together in minutes.

Your sleep habits may have suffered during the pandemic. We spoke to experts about building new and better ones to overcome “coronasomnia.”

And here is today’s Spelling Bee.

That’s it for today’s briefing. See you tomorrow. — Natasha

P.S. Stella Bugbee, formerly editor in chief of The Cut, is joining The Times as the new head of our Styles desk.

The latest episode of “The Daily” is on a rare bipartisan agreement in the U.S. Congress on a big industrial policy bill meant to counter China.

Sanam Yar wrote today’s Arts and Ideas. You can reach Natasha and the team at [email protected].