We’re covering losses for President Moon Jae-in’s party in Seoul and Busan and the latest guidance on the AstraZeneca vaccine. 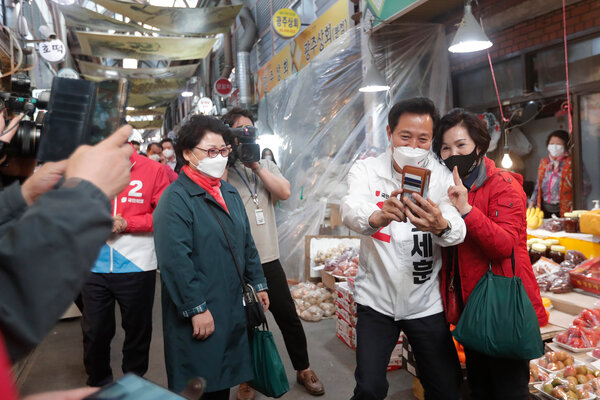 Conservative opposition candidates won in two mayoral races seen as a referendum on President Moon Jae-in and a bellwether for next year’s presidential contest.

Oh Se-hoon, the People Power Party candidate, beat Park Young-sun in Seoul by a margin of more than 18 percentage points, according to voting results announced by the National Election Commission. The Seoul mayor is considered South Korea’s second-most powerful official after the president.

In Busan, Park Heong-joon, another candidate affiliated with the opposition party, ​beat his Democratic Party rival.

Analysis: Mr. Moon’s approval ratings have been in a tailspin, amid North Korea diplomacy stumbles, a housing scandal and frustration with prolonged coronavirus restrictions. Many voters planned to support opposition candidates not because of their platforms, but to “pass judgment on the Moon Jae-in government,” surveys found.

Britain said on Wednesday that it would offer alternatives to the AstraZeneca vaccine for adults under 30 as European regulators described a “possible link” with rare blood clots.

It was a setback for the world’s most widely used vaccine and a blow to more than 100 countries relying on it, particularly the global south. Europe’s medical regulator stopped short of advising that the use of the vaccine be curbed in the bloc.

U.K. and European regulators both said that it was possible that a small number of blood clots were linked to the vaccine, but that more investigation was needed. European regulators described the cases as a serious but “very rare” side effect, reiterating that the benefits outweighed the risk, but said that health professionals and recipients should be cautious about symptoms. Officials have not concluded that age or gender were specific risks.

Context: Britain had been a holdout in Europe, never wavering in its use of the AstraZeneca vaccine. But evidence mounted that very small numbers of Britons had the clots.

Three weeks after suspending its vaccination campaign, Nepal has started administering shots again thanks to a gift of doses from China.

A 28-year-old man died in the Philippines after the police forced him to do 300 squats as punishment for breaking coronavirus lockdown rules.

The monthlong election unfolding in the eastern Indian state of West Bengal is deeply personal: Mamata Banerjee, the state’s chief minister and a tart-tongued political street fighter, is facing off against her former protégé of 20 years, Suvendu Adhikari.

He and other local leaders have defected from Ms. Banerjee’s Trinamool Congress party and aligned with Prime Minister Narendra Modi.

West Bengal remains deeply proud of its Indigenous culture and tolerance of minorities. It is run by a strong regional leader with the profile to challenge Mr. Modi. But even if the Bharatiya Janata Party loses, a strong showing could signal that Mr. Modi’s party is nearly unstoppable. Voting in the eight-phase election started last week, and results are expected in early May.

Political strategy: Mr. Modi has campaigned across the region, and portrayed Ms. Banerjee as someone who has appeased Muslims at the expense of the Hindu majority. The B.J.P. has also courted celebrities, including Mithun Chakraborty, a Bengali actor famous for movies like “Disco Dancer.”

While Hong Kong cracks down on the freedoms of city residents, it is still courting one very important demographic: the wealthy.

Chaos ensued at the Mrs. Sri Lanka beauty pageant after a former title-holder declared that the winner was ineligible because she was divorced, and then ripped the crown off her head.

Private investigators led by a former military operative. A mysterious USB stick filled with private emails. Checking in on workers on medical leave. Former Ikea France leaders are accused of using an extensive system of espionage, which court documents say stretches back to 2002. The case has reopened questions about data privacy at work and the tensions between employers and unions in France, while riveting the nation.

In 1971, shortly before Bruce Lee would achieve international acclaim in action films, the actor pitched a show about a Chinese martial artist called “The Warrior.” Studios turned it down. Lee said it was because executives didn’t think an Asian lead could attract American viewership.

A year later, a different television show, “Kung Fu,” helped introduce many Western audiences to martial arts — but the producers passed over Lee for a starring role. They instead chose David Carradine, a white actor with no prior knowledge of martial arts, to play a half-Chinese Shaolin monk in the Wild West.

Now the CW network is rebooting “Kung Fu,” with a predominantly Asian-American cast. The show “is attempting to right some of the wrongs of the original series,” as Max Gao writes in The Times.

Set in modern-day San Francisco, the drama is about a young Chinese-American woman, played by Olivia Liang, who fights crime. “It’s exciting that we get to reclaim it,” Liang told The Times, “and to say, ‘Hopefully, we’re doing it justice, the way it should have always been done.’”

Make stunning croissants at home, with a guide from Claire Saffitz.

What to Listen to

These five minutes will make you love the music of the German composer Johannes Brahms.

Tap into your smartphone’s audio powers by making the most of a voice assistant, and get creative by recording podcasts or songs.

That’s it for today’s briefing. See you next time. — Melina

The latest episode of “The Daily” is about President Biden’s tax policy.

Sanam Yar contributed reporting. You can reach Melina and the team at [email protected].