A U.S. vote on impeachment.

We’re covering a vote on the impeachment of President Trump, the biggest lockdown in China in months and a town built by Korean War refugees. 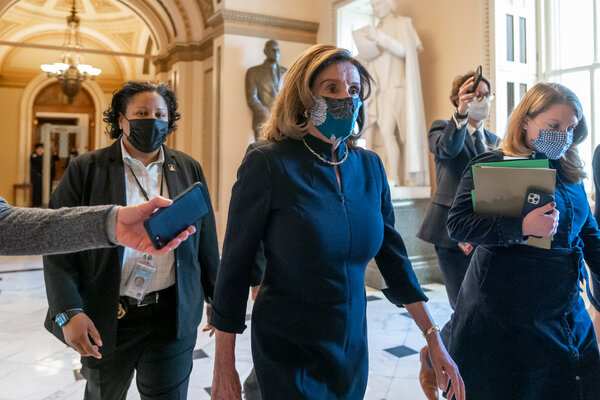 The first U.S. president to be impeached twice

The House of Representatives set itself on a course to impeach President Trump on Wednesday for a historic second time. A vote was planned in the coming hours to charge him for “inciting an insurrection” after his supporters stormed the Capitol last week. Follow our live updates.

A small but growing number of Republicans said they supported the effort. In 2019, not a single Republican voted in favor of impeachment. Representative Liz Cheney of Wyoming, a Republican, said there had “never been a greater betrayal by a president of the United States.”

What’s next: No president has ever been impeached twice or in his waning days in office, and none have ever been convicted. Here’s a look at the next steps in the process.

After the Capitol attack: Law enforcement authorities have warned of threats of violence ahead of Joe Biden’s presidential inauguration on Jan. 20. National Guard troops will be sent to Washington. Airbnb took a drastic step, canceling all of its reservations in the Washington area and blocking new ones in response to pleas for people not to attend.

The country is experiencing its worst coronavirus flare-up since last summer, testing the government’s success in beating back the infections.

Authorities have bolted into action, ordering testing of every resident, shutting down transportation and canceling weddings and other events. They’ve ordered more than 22 million people to remain inside their homes, double the number affected last January in Wuhan, the world’s first coronavirus lockdown.

The flare-ups remain small compared with the devastation facing other countries — an average of 109 new cases a day over the past week — but they threaten to undercut the success the country has had in subduing the virus and restarting the economy.

Details: The lockdown included Shijiazhuang, Xingtai, Langfang and districts within Beijing. Throughout the pandemic, officials have appeared especially worried about Beijing, home of the Communist Party’s central leadership.

Related: In another possible setback for China, scientists in Brazil have downgraded the efficacy of its CoronaVac vaccine to just over 50 percent — far below the 78 percent level announced last week. The implications could be significant for China’s push to provide its vaccine to the developing world.

Indonesia’s president, Joko Widodo, received an injection of a Chinese vaccine on live television as health officials prepared for a nationwide rollout.

Japan expanded its state of emergency to seven more prefectures, citing rising new coronavirus infections and strains on the medical system. The measures will last until early February.

More than 4,400 deaths from the coronavirus were reported across the U.S. on Tuesday, another daily record.

How North Korea will deal with President Biden

Kim Jong-un, North Korea’s leader, doubled down on his plan to strengthen his country’s nuclear program in a recent party congress where many hoped he would focus instead on the economy, which has been hard hit by the coronavirus pandemic and sanctions.

The country is likely to wait and see if the Biden administration proposes a dialogue, some analysts say. If North Korea does not get what it wants, it will continue its aggressive tactics: “The Biden team should be prepared for provocations and escalation in the first half of the year,” said one expert.

Mr. Kim has a deep mistrust of Washington and Seoul. In the reshuffle of the party leadership during the congress, he demoted officials who led diplomatic efforts, and has been emphasizing ties with China.

Related: Iran reached another milestone in its nuclear program, according to The Wall Street Journal, by starting work on a key material.

If you have 5 minutes, this is worth it

The town that war refugees built in South Korea

Six decades ago, after the Korean War, refugees like Han Gi-taek, above, arrived in a town on the border with North Korea to build a new life. Stray land mines and brutal cold made the land in the town, Haean, hard to cultivate. The government promised the settlers that if they could do so for 10 years, they would get to keep the land.

Now, after a holdup over thorny legal issues, South Korea is making good on its promise to 160 families. Our correspondent looked at their battle to make the town home.

Italian mob trial: Prosecutors opened the largest mob trial in decades, with 325 defendants linked to the Ndrangheta crime syndicate being accused of murder, corruption, drug trafficking and other crimes in the southern region of Calabria.

Aleksei Navalny: The Russian opposition leader said he was planning to return to Russia this weekend, after recovering in Germany from a nerve-agent attack widely attributed to the Russian state. He faces the threat of being jailed upon arrival.

Snapshot: Above, National Guard troops in the U.S. Capitol on Wednesday, where many of them are sleeping. More than 20,000 troops from around the country are expected to arrive in Washington ahead of the inauguration of President-elect Joe Biden.

What we’re reading: This Wired article about the hunt to find the identity of a hiker who died in Florida, where his emaciated body was discovered in a tent. Natasha Frost, on the Briefings team, calls it “spellbinding, and super sad.”

Cook: This Thai-inspired chicken meatball soup is reviving and cozy, made in one pot, and ready in 30 minutes.

Read: Nadia Owusu’s “Aftershocks” is an attempt to understand what it means to be rooted and rootless. Our reviewer describes it as “a gorgeous and unsettling memoir of Owusu’s own peripatetic childhood, along with the bewilderment and breakdown that came after.”

We have more ideas on what to read, cook, watch and do while staying safe at home. It’s all in our At Home collection here.

Supporting the arts during the pandemic

A host of countries are taking steps to help artists and cultural venues stay afloat during the pandemic, some more generously than others. Here’s a look at the highlights, and missteps, from eight countries’ efforts.

In May, the government announced it would spend about $268 million in aid to the arts over four years — a sizable amount for a country with a population of five million. The government’s cultural recovery plan had a particular focus on musicians, with a $3.5 million fund to help bands tour nationwide. Thanks to the country’s grip on coronavirus cases, bands have been able to perform without social distancing measures since June.

The government has provided small payments to arts workers, including freelancers, above existing unemployment benefits. A plan for actors and musicians that began last summer provided a one-time payment of about $449. And in November, the country launched a similar initiative that offered up to about $1,000 to people who make crafts and those who work behind the scenes in theaters and on film sets.

South Korea never experienced a full-fledged lockdown in the spring, as it took other measures to quickly control the spread of the virus. As a result, cultural life rapidly returned to a semblance of normalcy (a production of “The Phantom of the Opera” in Seoul closed for just three weeks). But South Korea’s government still provided some $280 million in support to cultural institutions.

Thank you
Carole Landry helped write this briefing. Theodore Kim and Jahaan Singh provided the break from the news. You can reach the team at [email protected]

P.S.
• We’re listening to “The Daily.” Our latest episode is about whether a recent crackdown on U.S. social media makes violence less likely, or just harder to track.
• Here’s our Mini Crossword, and a clue: Travel by car (five letters). You can find all our puzzles here.
• David Rubin, The Times’s chief marketing officer, talked to the Our Future podcast about his vision for The Times being the “Netflix of Truth.”