We’re covering the growing defiance of protesters in Thailand, Jacinda Ardern’s landslide victory in New Zealand and a special section from The Times editorial board on Donald Trump. 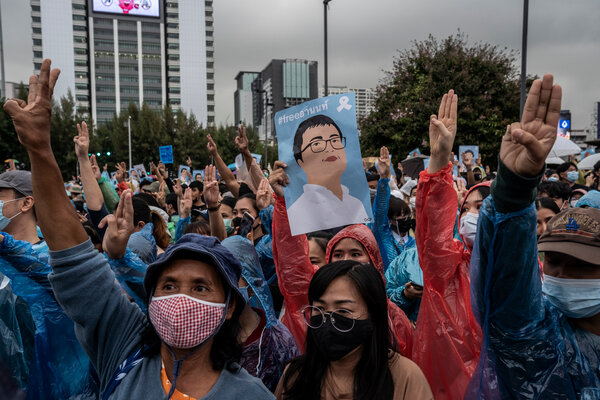 In the latest of months of demonstrations, tens of thousands of pro-democracy protesters gathered in Bangkok and in about 20 provinces over the weekend to call for fresh elections, a new Constitution and reforms of the monarchy.

Over the past few days, Thailand’s military-linked government, led by Prayuth Chan-ocha, a retired general who orchestrated an army coup in 2014, has intensified efforts to snuff out the protests, including seeking to block access to Bangkok’s center and to transportation.

Far more incendiary than calling for Mr. Prayuth’s exit are the protesters’ demands that the king, one of the world’s richest monarchs, hew to the Constitution rather than continue to float above it as a semi-divine entity. Protesters have been taking turns posing in front of a spray-painted sign on a road that showed the national flag superimposed with the words “Republic of Thailand.”

What’s next: On Sunday, Mr. Prayuth’s spokesman said that while the government was committed to listening to problems from all sides, he was also alert to any protesters who might incite violence. Parliament has been warned to stand by for a special session on Monday. Lawmakers had not been scheduled to meet until November. Concern is high, given that Thailand has seen numerous violent crackdowns on protesters in the past.

‘We will build back better from the Covid crisis’: Jacinda Ardern’s landslide win

New Zealand’s prime minister and her Labour Party coasted to victory in national elections, riding a wave of support for her response to the coronavirus. Ms. Ardern has now cemented her position as New Zealand’s most popular prime minister in generations, if not ever.

The 40 year-old politician has become a global standard-bearer for a progressive politics that defines itself as compassionate and competent in crisis. “We will govern as we campaigned: positively,” Ms. Ardern said in her acceptance speech on Saturday night. “We will build back better from the Covid crisis. This is our opportunity.”

Political rebalancing: Ms. Ardern’s first term was marked by a partnership with the populist, center-right New Zealand First Party. Now Labour will be able to govern on its own, giving her more leeway to move left. The core decision that Ms. Ardern faces is how far to push.