Roughly 20 percent of the world’s people have received at least one shot of a Covid-19 vaccine. The speed with which the remaining 80 percent are vaccinated will mean the difference between life and death for a staggering number of people — probably in the millions.

The race to vaccinate the world will be a major topic at the meeting of the G7 nations that begins today in England. The countries in the G7 — the U.S., Canada, Japan, Britain, France, Germany and Italy — increasingly have Covid under control within their own borders. But the pandemic remains an urgent threat across much of Latin America and in parts of Africa, Asia and the Middle East. (Here’s a map showing caseloads in each country.)

In a speech in England yesterday, President Biden cited “our humanitarian obligation” in announcing that the U.S. would buy 500 million doses of the Pfizer vaccine and donate them to poorer countries. G7 leaders are set to announce today that they will collectively donate 1 billion shots by the end of next year.

After Biden’s speech, Natalie Quillian, the deputy coordinator of his Covid response, told us: “We are acting with the same urgency and applying the same whole-government approach that we have applied here domestically.”

But those donations still leave the world very far from having enough doses anytime soon. In all, at least 10 billion more shots are probably needed.

Here are the big questions about what happens next.

Money is not the main issue. Each additional dose is likely to cost $5 to $7. (The Biden administration is paying roughly $7 per dose for the Pfizer shots it is donating.)

In all, a campaign to vaccinate the rest of the world — at a cost of $50 billion to $70 billion — would amount to less than 1 percent of global economic output this year. “The costs of being in this pandemic are so enormous,” Rachel Silverman of the Center for Global Development told us. “It will be history’s greatest bargain if for $50 to $70 billion we can vaccinate the world and get out of this crisis.”

The cost is low enough that poorer countries can afford to cover much of it on their own. But it represents such a tiny share of rich countries’ budgets that many experts have called on the G7 to take the lead. The International Monetary Fund has suggested using grants from rich countries, nongovernmental agencies and charities.

What about excess doses?

One helpful source of doses will be those that the U.S. and Europeans countries have ordered and do not need. They bought these doses partly as an insurance policy against some vaccines not working. But with the Moderna, Pfizer, Johnson & Johnson and AstraZeneca vaccines all proving to be highly effective, rich countries will ultimately have more doses than they need for their own populations.

These excess doses could account for one to two billion of the needed 10 billion doses, according to the Center for Strategic and International Studies and others. “They’re not insignificant, but they fall short,” Dr. Peter Hotez of the Baylor College of Medicine said. 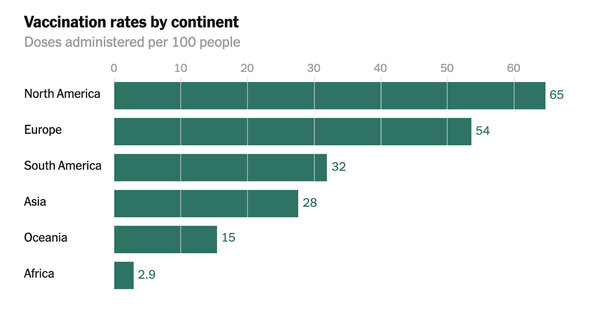 How to speed production?

The next crucial step will be the production of vaccines. The world already appears to be on pace to manufacture enough doses by late next year, yet that would be too slow to prevent many deaths.

G7 nations can accelerate production by pushing for the removal of trade barriers that disrupt the flow of vaccine supplies (like glass vials), Prashant Yadav and Rebecca Weintraub argue in the Harvard Business Review. Political leaders can also make clear that they stand ready to help pharmaceutical companies solve any logistical problems. “Some of this is calling up the C.E.O. every day and saying, ‘Hey, where are you on identifying new manufacturing sites? What do you need from us?’” Silverman said.

As an additional step, the Biden administration has called for waiving patent protections for Covid vaccines to expand the number of companies that can make them. But some experts doubt waivers will do much to lift supply, given the complexity of manufacturing the vaccines.

One point to keep in mind: Not all vaccines are equal. Sinovac — a Chinese-made vaccine that has been given to people in 30 countries — appears to be substantially less effective. Cases have continued rising in Latin America partly because of Sinovac’s flaws.

Between seven million and 13 million people have died of Covid, according to an analysis by The Economist magazine. The pace has been speeding up, too: More people have already died in 2021 than did in all of 2020.

A rapid global vaccination program — combined with natural immunity in people who have already had Covid — could create the same virtuous cycle that’s underway in the U.S., Britain and other countries: A decline in cases feeds on itself, as there are fewer infected people able to spread the virus to others. And by prioritizing older people for shots, countries can cause deaths to decline even more sharply than cases.

Most of the world, however, remains far from that outcome.

More on the virus: A profile of Dr. Rochelle Walensky, Biden’s C.D.C. director.

In its hunt for leakers, the Justice Department under Donald Trump took the unusual step of subpoenaing the data of prominent Democrats in Congress, as well as their families.

The Pentagon is trying to increase diversity in the military. Some Republicans criticize it as “woke ideology.”

Consumer prices surged last month. Are the increases a sign of things to come — or mostly a post-pandemic snapback?

With less than two weeks until the election, the Democratic candidates for mayor of New York City met for a debate. Here are five takeaways.

The civil war in Ethiopia’s Tigray region has plunged hundreds of thousands of people into famine.

Drought conditions in the Western U.S. are the most widespread in at least 20 years, these maps show.

The sand in Maine is turning people’s feet black. Scientists think they know why.

What’s fashionable to wear after 15 months in lockdown? Whatever you want, says Isabel Slone.

Rest up: If the pandemic made it hard to get a good night’s sleep, these tips may help.

Solar eclipse: Highlights from the “ring of fire” sunrise.

A Times classic: This 1950s portrait of America still haunts.

Lives Lived: After Jessica Morris learned she had glioblastoma, a deadly brain cancer, she began a crusade to fund research and improve the quality of care for others like her. Morris died at 57.

It could be Major League Baseball’s next big scandal: Pitchers have been smearing sticky material on the ball, allowing their pitches to spin faster. If the season ended today, the leaguewide batting average would be the lowest in history.

In a Sports Illustrated investigation, a recently retired player said that as many as 90 percent of pitchers are using “sticky stuff” — which can include pine tar and glue. “It seems to have created these basically impossible-to-hit pitches,” one pitcher said.

Despite rules against foreign substances on the ball, the M.L.B. had allowed the sticky revolution to go largely unchecked. But after players and managers began to speak more openly about it, the league opened an investigation. It will soon announce a plan to have umpires inspect pitchers between innings, ESPN reported.

Dave Martinez, the Washington Nationals manager, has said that some amount of extra grip is helpful to keep today’s hard-throwing pitchers from losing control of the ball. But when one of his players was hospitalized after taking a fastball to the face, he called for a crackdown and described the situation as “scary.” — Tom Wright-Piersanti, Morning editor

Make the most of strawberry season with these 14 recipes. (We’re partial to this fresh strawberry pie.)

“In the Heights,” adapted from Lin-Manuel Miranda and Quiara Alegría Hudes’s Broadway show, is “a dream come true,” A.O. Scott writes in a review. See scenes from the premiere.

The author Philip Roth left behind more than 7,000 marked-up paperbacks and hardcovers. Look inside his personal library.

The late night hosts joked about Biden’s trip to Britain.

This week’s News Quiz is here. See how you do compared with other Times readers.

The pangram from yesterday’s Spelling Bee was bathroom. Here is today’s puzzle — or you can play online.

If you’re in the mood to play more, find all our games here.

Thanks for spending part of your morning with The Times. See you on Monday. — David

P.S. Carey Mulligan and Zoe Kazan will play the Times reporters Megan Twohey and Jodi Kantor in a movie based on their investigation into Harvey Weinstein.

There’s no new episode of “The Daily.” Instead, on Episode 3 of “Day X,” how a neo-Nazi terror group tried to escape justice. On “The Ezra Klein Show,” A.I.’s utopian possibilities.

Claire Moses, Tom Wright-Piersanti and Sanam Yar contributed to The Morning. You can reach the team at [email protected].

Sign up here to get this newsletter in your inbox.