The State of the Pandemic

A few months ago, there was widespread talk about the possibility of a “fourth wave” of Covid-19 in the U.S. this spring. Many states were relaxing restrictions, and many Americans, tired of sitting at home, were beginning to expose themselves to greater Covid risk even though they weren’t yet vaccinated.

Fortunately, however, the fourth wave has not arrived.

Cases and hospitalizations rose only modestly in late March and early April, and they have since begun falling again. Deaths have not risen in months. 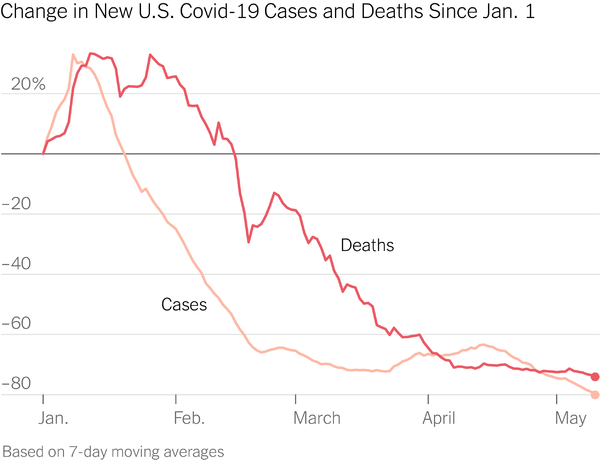 What happened? There are several explanations. A large number of Americans have built up natural immunity by already having had Covid. The vaccination program expanded rapidly. And even as some Americans behaved recklessly, others continued to wear masks indoors. (Outdoor masks, as regular Morning readers know by now, seem to make little difference in most circumstances).

Every couple of weeks, I’ve shown you a set of charts that summarizes the state of the pandemic. Today is the latest installment.

Despite the good news, it’s worth emphasizing that the crisis is not yet over. There are two big Covid problems, both involving vaccination.

First, roughly one in three American adults remain skeptical of the vaccine, including many older people, who are at the highest risk of severe versions of Covid. In the most recent poll by the Kaiser Family Foundation, 13 percent of adults said they would definitely not get a shot; 6 percent said they would do so only if required by their employer, their school or another group; and 15 percent said they were waiting to see how the vaccines affected others.

(Related: A new Times story focuses on the millions of Americans who say they are open to getting the vaccine but have not yet managed to do so.)

This wariness helps explain why the U.S. continues to trail Britain and Israel in vaccination rates and why deaths have fallen even more sharply in those countries, despite their huge virus outbreaks early this year.

In the U.S., more than 600 people die from Covid each day on average. One issue is that some of the same communities that are hostile to wearing masks indoors — politically conservative communities, for the most part — are also hesitant about the vaccine. So long as a large number of Americans over 40 remain unvaccinated, Covid deaths are unlikely to fall near zero anytime soon.

The second major Covid problem is outside the U.S.: Vaccination rates remain extremely low in most of the world, especially in poorer countries.

Worldwide, there are still some encouraging signs. Global cases have been falling over the past two weeks. Africa and much of Asia continue to report low levels of Covid, for reasons that are not entirely clear. Even in India, the site of a dire outbreak, caseloads have declined slightly in the past few days.

But India’s recent death toll has been horrific. Cases have also been rising in Cambodia, Malaysia and Thailand. Brazil and much of South America are struggling, too. All of these countries serve as reminders that the world remains vulnerable to new waves.

The biggest Covid issue for the rest of 2021 is probably the speed of vaccinations in lower-income countries. It will determine both the future death toll and the likelihood that dangerous new variants take hold, in all countries. Roughly 90 percent of the world’s population has not yet received a shot.

More on the virus:

Schools, camps and beaches: Inside the campaign to vaccinate 12- to 15-year-olds.

Research shows that the vaccine is safe and effective, but some parents who got shots themselves may not let their children get them.

Uber and Lyft will provide free rides to vaccination sites from May 24 until July 4.

It’s the worst fighting since 2014, and civilians are bearing the brunt: At least 35 Palestinians and six Israelis have been killed, officials said.

President Biden had hoped to shift foreign policy focus away from the Middle East. This conflict may force him to get involved, Michael Crowley writes.

Liz Cheney, who may be about to lose her House Republican leadership position, delivered a defiant speech: “I will not sit back and watch in silence while others lead our party down a path that abandons the rule of law.”

More than 100 Republicans, including former elected officials, are threatening to form a third party.

U.S. authorities detained almost 179,000 people along the border with Mexico last month, the highest number in at least two decades.

A Georgia prosecutor said that the Atlanta-area spa shootings in March that killed eight people were hate crimes but did not yet explain why. She plans to seek the death penalty.

The N.R.A. filed for bankruptcy to try to evade a legal challenge from New York regulators. Yesterday, a judge rejected that strategy.

The Washington Post picked Sally Buzbee, the executive editor of The Associated Press, as its top editor. She is the first woman to hold the job.

The fingerprints of climate change: America’s “normal” weather is getting warmer.

The Preakness Stakes will allow Medina Spirit to compete, despite failing a drug test after winning the Kentucky Derby.

Republicans plan to vote today on whether to oust Cheney from her leadership position for criticizing Trump’s false election claims. Here’s some commentary:

Unseating Cheney would put the party “on the side of a lie,” The Wall Street Journal’s Peggy Noonan argues. It will also hurt Republican electoral prospects, says Commentary’s Noah Rothman.

Cheney’s focus on Trump’s flaws, rather than on Democrats, puts her out of step with the rest of her party’s leadership, Eliana Johnson counters in Politico.

“It is because she is such a partisan, conservative Republican that her dissent is so significant,” New York magazine’s Jonathan Chait has written. But Maureen Dowd argues that Cheney deserves some blame for Republicans’ comfort with lies.

H Mart forever: A place where you can find “bulk bins of fish balls, live lobsters brooding in blue tanks, a library of tofu.”

Dunbar’s number: Can you have more than 150 friends?

A Times classic: Why songs of the summer sound the same (and you may want to turn up the volume).

Lives Lived: Pat Bond was a foundational figure in the B.D.S.M. community. Two people showed up for the first meeting of the Eulenspiegel Society, which Bond started in the early 1970s; membership eventually grew to more than a thousand. He died at 94.

The power of a check mark

Achieving daily goals can be hard. About a decade ago, Amitava Kumar assigned a class of college seniors to write something every day — in part to motivate himself to write.

To succeed, Kumar tried a simple trick: After completing each day’s task, he would put the date and a check mark on the notebook’s final page. Somehow, it worked — by the end of the year, he had completed a short book.

Today, check marks serve a larger purpose for Kumar. They remind him that he is a writer. “It is the visible symbol of my realization that who I am is defined by what I do,” he writes in The Times Magazine’s letter-of-recommendation feature. And he explains why you might like them, too. “The check mark is more important than whatever comes of the daily work whose completion you’re marking,” he argues. “The first represents actual living; the second, merely a life.”

Related: Atul Gawande’s 2007 piece in The New Yorker on the power of checklists. — Claire Moses, a Morning writer

It is Eid al-Fitr tonight, the end of Ramadan and a celebration of breaking the fast. Here are recipes, including namoura, a syrup-soaked Lebanese cake.

What to Listen to

Chloe Moriondo and Girl in Red both have new albums that showcase frank emotions.

A Nigerian satire, a mysterious French romance and more in this roundup of stream-worthy international movies.

The pangram from yesterday’s Spelling Bee was exactable. Here is today’s puzzle — or you can play online.

If you’re in the mood to play more, find all our games here.

Thanks for spending part of your morning with The Times. See you tomorrow. — David

P.S. Nineteen years ago today, Jimmy Carter became the first U.S. president, in or out of office, to visit Cuba since the 1959 revolution. He delivered part of his address in Spanish, The Times reported.

Today’s episode of “The Daily” is about Liz Cheney. On “The Argument,” a debate over D.C. statehood.

Sign up here to get this newsletter in your inbox.