Opinion | Winning the House Is Not Nothing 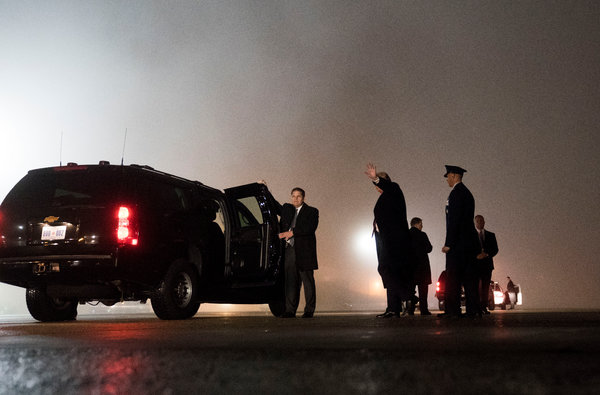 If the blue tsunami that Democrats were hoping for did not quite materialize, the party did manage to retake the House of Representatives and claw back at least some hold on our national government. It will enable them both to promote their own ideas and initiatives — and to provide some real oversight of the Trump White House, even if impeachment is not on the table. Much more important, it will also enable Democrats to save health care for millions of Americans (myself included), though President Trump will doubtless now continue his Ahab-like pursuit of President Barack Obama’s legacy in the courts and the federal bureaucracy.

Have no doubt about it: the 2018 elections were a referendum on Mr. Trump, and he must own it. Since it is not the president’s wont to accept responsibility for anything, you will hear much in the weeks (and months and years) ahead about how rare it is for any incumbent president’s party to gain or hold seats in a midterm race.

This is true. It has happened only three times since the Civil War, and then every time in the wake of a national trauma of one sort of another: in 2002, when the Republicans managed it a little over a year after the 9/11 attacks; in 1998, when a nation fed up with the endless hunting of President Bill Clinton enabled Democrats to keep from losing any seats in the Senate and pick up five in the House; and in 1934, when Americans, finally managing to pull themselves up at least partly from the nadir of the Great Depression, rewarded President Franklin Delano Roosevelt’s Democrats with a remarkable nine seats in each house.

The field was set for Republicans to pull off the same trick in 2018. Whatever his responsibility for either, Mr. Trump could boast of a red-hot economy and a campaign that drove ISIS from its last major citadels. Toss in a summit with North Korea’s Kim Jong-un that proved more comical than scary, a shaking up of both our more complacent allies and China, and Mr. Trump might have fashioned a reasonable case that his methods, crude and unsavory though they might be, were accomplishing something. A sudden switch in tone and tactics, a commitment to building something (something more inspiring than a border wall, that is), and a few high-minded, kumbaya speeches might have thrown the opposition completely off balance and provided Mr. Trump, for once, with something that really was a historic accomplishment.

He couldn’t do it. What we got instead were simply more displays of churlishness and solipsism, running from his oblivious response to the horrible massacre of Jewish Americans at a Pittsburgh synagogue (it was somehow the fault of the “fake news media” which is “the enemy of the people” and hey, they should have had better security), to his implication that pipe bombs sent to his enemies were a “false flag” operation, to his incessant pillorying of the “caravan” of desperate refugees fleeing Central America, right down to a final ad considered so racist that it was even pulled from Fox.

“A lot of things are offensive. Your questions are offensive a lot of times, so you know,” was Mr. Trump’s comment on this, nearly his last comment of the campaign.

He drew the reaction he deserved. The former congressman Steve Israel told me that he divided this strange, often frightening election season into three parts: an initial blue wave of anger, followed by a countering red wave of anger over the Kavanaugh hearings — but then another blue wave of anger, as Mr. Trump injected himself into the race again.

“Midterm voters, especially, vote on visceral emotions, fear and anger,” Mr. Israel said. “Republicans tried running on fear. This is the first time I have ever seen Democrats voting in the midterms motivated by anger.”

It was a mood reflected in much of Manhattan. At my polling place — appropriately enough, the Alfred E. Smith School on the Upper West Side, named for New York’s original “Happy Warrior” — lines were longer than I had seen them on any Election Day save for the Obama-McCain election of 2008. This time the feeling in the lines was entirely different from that day ten years ago, and not just because the balmy sunshine had been replaced by rain. My fellow voters seemed grimly determined, quietly set on delivering a message even though there were no competitive races (or competitive Republicans) on the ballot.

So where are we and where do we go from here?

A tip that Mr. Trump should take from a much better politician than himself, the man who did pull off the impossible, is that there are times to get off the stage. Even when things were going well, Franklin Roosevelt liked to say, periodically, that it was time for him to disappear — to keep a low profile, get out of the public eye and go fishing, even in that much less media-freighted era. No one wants a president in her face all the time, and no TV show is on every night.

It is not advice Mr. Trump will take. Even on election night, he was giving himself full credit in his tweets for what he called a “tremendous success” and retweeting what the writer Ben Stein had said about him, namely that “Mr. Trump has magic about him. He has magic coming out of his ears. He is an astonishing vote-getter and campaigner.”

Well, the magical Mr. Trump has become a permanent low-pressure system hovering over us, dominating our conversation, filling our airwaves, distracting us from exercising our great right to be left alone. But he is constitutionally incapable of giving up the tweet-glow, and so will likely exhaust even his most devoted followers in the end.

Regarding those followers: we have all been told, over and over again, by one expert after another from nearly every possible spot on the political spectrum that none of us must ever, ever talk down to these, our fellow Americans, or criticize their choice of Mr. Trump in any way, lest we further alienate them.

Fine. I will say this then: listen to yourselves. Listen to your experience, to that little voice in your heart or in your head, to what you can recall of what used to be acceptable presidential behavior in this country. It will tell you that this is not a fit man to be president, in any way whatsoever. It will tell you that this is not what you have to settle for, that you yourselves can do better in choosing someone else, no matter how often you have been disappointed in the past.

For Democrats, this campaign had its own heartbreaks: Beto O’Rourke, Stacey Abrams and Andrew Gillum losing to three of the most obnoxious candidates in the race. The wrenchingly narrow failure to knock the likes of Steve King or Chris Collins out of the House. And of course, Republicans keeping the Senate means not only that Mr. Trump will have something to brag about (when does he not?) but that he can jam through as many appointments — particularly judicial appointments — as he likes, perhaps starting with a replacement for Justice Clarence Thomas at a politically convenient moment like, say, 2020.

As is our wont, we liberals bombarded ourselves — and our candidates — with endless litanies of advice on what we should and should not say. In one October week, I had a close friend rage to me that Nancy Pelosi had spoiled everything by daring to say, months before, that the proposals of the Democrats’ newly minted star from the Bronx, Alexandria Ocasio-Cortez, would not always reflect those of House Democrats going forward — only to have another friend email me angrily that Ms. Ocasio-Cortez was going to spoil everything by proposing that we spend $36 trillion dollars on her socialist ideas!

As it worked out, Ms. Pelosi, one of the most consistently and unfairly maligned politicians of our time, will now become the first congressperson to regain the speakership of the House since Sam Rayburn did it back in 1955. Ms. Ocasio-Cortez will join her in the House, and judging by how intelligent, tough and savvy both women are, they will no doubt learn a great deal from each other.

This is something that would have been all but impossible just thirty years ago, and unthinkable fifty years ago: the Italian-American woman Speaker of the House mentoring the Hispanic woman representative of a chunk of Mr. Trump’s old borough — both of them part of a group of what is now more than one hundred women in the House. The bumbling, exasperating, sometimes corrupt, often oblivious Democratic Party — always the party of immigrants and (however belatedly) the party of people of color — is the party of inclusion, and its win this year, in the face of relentless demagoguery and racism, makes it truer than ever to say it was a good night for our democracy.

Kevin Baker is a novelist and historian and the author, most recently, of “America the Ingenious.”