Opinion | Why Michelle Obama Is ‘Everything’

A few days before the release of Michelle Obama’s memoir, “Becoming,” I went to look at her portrait at the National Portrait Gallery to reflect on her evolving role in public life, and to talk to other women who were doing the same.

The book, published on Tuesday, has been described as offering a more personal invitation into her life than any she’s previously extended. Early reviews praise her discussion of her miscarriage and of her use of in vitro fertilization for its potential to fight stigma about reproductive problems that go under-discussed especially among black women.

As I approached the image of Mrs. Obama as Amy Sherald has rendered her, she stared right back at me, her hand propped under her chin, wry but not quite inviting. In a stark contrast to the memoir, this is not an image of the former first lady at her most accessible.

But that’s no bar to the strong connection that the women I met gathering around her portrait feel. Here, with her hanging just over their shoulder, they echo one another’s unreserved awe, calling Mrs. Obama “beautiful,” “inspiring,” and “so important.” I hear similar refrains again and again: “I love her,” “She’s stunning,” or “We miss her.” 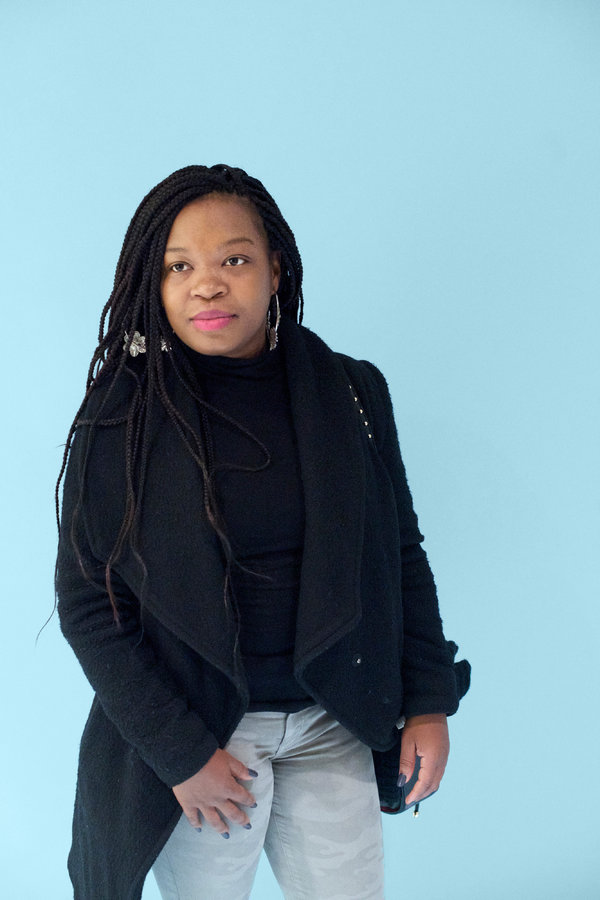 The brand of transparency offered in the book — the kind Mrs. Obama often had to temper during her time as first lady — is a reminder of what made women like us feel so deeply endeared to her in the first place.

Long before the publication of “Becoming,” she’d sometimes hint at the friction just under her surface. In the earliest days of Barack Obama’s first term, she seemed deeply in love yet vaguely dissatisfied, subjected to a public gaze she’d never courted, in a position that may have felt, at times, constrictive for someone with a Princeton and Harvard Law pedigree.

Though she appeared to have it all, she seemed uninterested in perpetuating that myth that such a thing is possible. Bringing her own mother into the White House help care for her daughters was a very public confession that she would not only be needing assistance, but she would prefer if that help came from someone she trusted to keep her recognizable to herself. This was even as she was transforming into the kind of figure whose official portrait would draw hordes of admirers to an alcove on the Portrait Gallery’s third floor.

All of this is subtext as a group of girlfriends point at Mrs. Obama’s portrait and say teasingly, “There goes your queen!” All of this is part of what fuels middle-aged sisters and mothers of young daughters to art-direct smartphone photos in front of the painting until each has their own perfect image.

Fourteen-year-old Camryn Redding of Baltimore told me she felt inspired that “somebody like me can be in a museum like this, showing that it’s not just for people with a lighter skin color, it’s for me, too. I think she’s empowering. I think that she’s a really great example for black women everywhere. And I think she did amazing things in the White House while she was there.”

Visitors described her to me in the familiar terms that pepper social media posts about her: “regal,” “elegant,” and “just … perfection.” As Debra Storm of Lehigh, Pa, said, no matter what Mrs. Obama had to endure, “she was always elegant, perfect, intelligent.”

She earned the astral interpretation we see on that wall over the course of a decade spent rising above the racist, sexist political fray. She — through her openness as well as her achievements — has earned the adoration of these women, too.

“First, I love me some Michelle Obama. She’s such an inspiration to womanhood. She’s smart. She’s classy. She’s everything I want to emulate and aspire to be,” said Margaret Garcia, who had traveled from the Bronx. A few beats later, the coda: “She’s everything.”

“Everything” — as the new book reminds us — has many parts. Yes, it includes role model behavior and a flawless image. But Mrs. Obama wouldn’t be “everything” without a long history of the kind of transparency about the less-perfect parts of her life that’s earned the memoir such high praise.

I love Ms. Sherald’s Vogue-cover-worthy vision, as lofty and queenly and pensive. I also love the early-era first lady who was unguarded and a little gaffe-prone, once Freudian-slipping in a CBS News interview that she was a “busy single mom” before quickly adding, “Sometimes, when you’ve got the husband who’s president, it can feel a little single, but he’s there!” I love today’s version: the woman who reveals — not in a slip-up but intentionally in writing — that becoming a mother isn’t always easy.

In fact, nothing has come to Michelle Obama easily. She’s just maintained enough grace under pressure to make it appear so. During her first four years in Washington, she would occasionally signal that the role of a first lady, when performed regally, elegantly and perfectly, could be exhausting, exasperating and lonely. By the end of her husband’s second term, she was gliding across the stage at Hillary Clinton campaign rallies, uttering what would become one of the most ubiquitous catchphrases of 2016, “When they go low, we go high,” wearing the first lady mantle as comfortably as a second skin.

She’s grown into her role so beautifully that it’s easy to forget — or perhaps, it’s easy to need a revealing memoir to remember — that there were any growing pains at all.

Stacia Brown is a writer and the creator and host of the podcasts The Rise of Charm City and Hope Chest.