Opinion | Why Aren’t Democrats Walking Away With the Midterms?

The night Donald Trump was elected was supposed to be, for most liberals and a few conservatives, the beginning of the end of the world. The economy would surely implode. The U.S. would probably blunder into a catastrophic war. The new American president would be blackmailed into conducting foreign policy as Putin’s poodle.

None of that has happened — not yet, at any rate. On Friday, The Wall Street Journal reported the fastest rate of annual wage hikes in almost a decade, depriving Democrats of one of their few strong arguments about the true state of the economy. Unemployment is at its lowest rate since Vince Lombardi coached his last game in December 1969. The North American Free Trade Agreement has been saved with minor modifications and a new name.

Oh, and: The Islamic State is largely defeated. Tehran has not restarted its nuclear programs despite America’s withdrawal from the Iran deal. U.S. sanctions on Russia are still in place. Democrats badly damaged their chances of taking the Senate with their over-reaching and polarizing crusade to stop Brett Kavanaugh’s confirmation to the Supreme Court. What more could Trump ask for?

In normal presidencies, good news, along with your opponents’ mistakes, is good politics. It’s your Topic A. In normal presidencies, the politics of cultural anxiety, social division or ethnic scaremongering — that is, of proposing the end of birthright citizenship and demonizing elite media and militarizing the U.S. border — is Plan B. It’s what you turn to first when you don’t have enough to say for yourself otherwise.

But that’s not how the Trump presidency rolls. In this campaign, fear is what’s on the Republican menu. Peace and prosperity? Mere side dishes.

The mystery of Donald Trump is what impels him to overturn the usual rules. Is it a dark sort of cunning or simple defects of character? Because the president’s critics tend to be educated and educated people tend to think that the only kind of smarts worth having is the kind they possess — superior powers of articulation combined with deep stores of knowledge — those critics generally assume the latter. He’s a bigot. He’s a con artist. His followers are dumb. They got lucky last time. They won’t be so lucky again.

Maybe this is even right. But as Trump’s presidency moves forward, it’s no longer smart to think it’s right. There’s more than one type of intelligence. Trump’s is feral. It strikes fast. It knows where to sink the fang into the vein.

This has been Trump’s consistent strength from the moment he entered the Republican race until the second he got wind of the migrant caravan. Yes, his administration doesn’t even have an ambassador in Honduras, and if the U.S. has any kind of coherent Central American policy it would be news to me. Also, the idea of deploying thousands of U.S. troops to repel and even fire on the caravan is repellent, fascistic and probably unlawful. 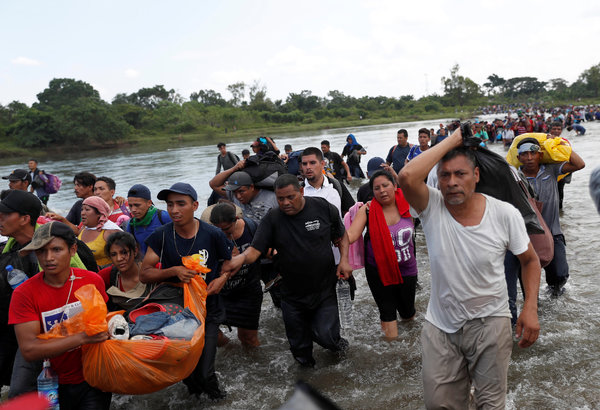 Still, several thousand people are pushing their way to the U.S. border with the idea that they will find a way to push their way through it. If they do, tens or even hundreds of thousands more will surely follow. It’s perfectly reasonable for fair-minded voters to wonder how the U.S. will vet and then absorb even a fraction of them (though I think we easily can), and what doing so will mean for our wider immigration system.

To which the Democratic response is — what, exactly?

If it’s “compassion,” it’s a non-answer. If it’s to abolish ICE, it’s a dereliction of responsibility for governance. If it’s to open the border, it is an honest form of political suicide. If it’s more trade and foreign aid for Central America, that’s a solution for the too-long term.

The truth is that there is no easy fix to the challenge of the caravan, which is why Trump was so clever to make the issue his own and Democrats have been so remiss in letting him have it. The secret of Trump’s politics is to mix fear and confidence — the threat of disaster and the promise of protection — like salt and sugar, simultaneously stimulating and satisfying an insatiable appetite. It’s how all demagogues work.

I have written previously that the real threat of the Trump presidency isn’t economic or political catastrophe. It’s moral and institutional corrosion — the debasement of our discourse and the fracturing of our civic bonds. Democrats should be walking away with the midterms. That they are not is because they have consistently underestimated the president’s political gifts, while missing the deeper threat his presidency represents.

There’s a lesson here worth heeding. Our economic GDP may be booming, but our moral GDP is in recession. The tragedy of Pittsburgh illustrates, among other things, that the president cannot unite us, even in our grief. Whatever happens on Tuesday, Democrats will only win in 2020 if they find a candidate who can.

Bret L. Stephens has been an Opinion columnist with The Times since April 2017. He won a Pulitzer Prize for commentary at The Wall Street Journal in 2013 and was previously editor in chief of The Jerusalem Post. @BretStephensNYT • Facebook