Opinion | Up Against Big Oil

The victories in the midterm elections were real and sweet for environmentalists and progressives: There will be at least 119 women in Congress, and for the first time their ranks will include a Muslim (two, actually) and a Native American (actually, three).

Some of those candidates were talking about a Green New Deal, like the one put forward by the soon-to-be-youngest member of Congress, Alexandria Ocasio-Cortez, that would rapidly reduce the nation’s fossil fuel use while preparing the country for climate change. The fact that the Democrats now control one house of Congress means that President Trump’s pillage of environmental regulations will at least proceed under the spotlight of investigation. Half a dozen new states now have governors and legislatures willing to consider cutting greenhouse gas emissions significantly.

And yet I confess I came away from Tuesday night feeling unsure that there really is the political space to get done what needs doing in the time that we have left. Last month, the United Nations Intergovernmental Panel on Climate Change said that we had perhaps a dozen years to really turn the planet around by substantially reducing greenhouse gas emissions.

It’s not that we won’t see real change eventually. The new governor of Colorado, for instance, announced the most ambitious targets in the nation for converting to 100 percent renewable power by 2040. That’s wonderful — but it’s also in one state, and still slow, at least when compared with the timetable laid out by the United Nations’ climate panel.

The new head of the House Committee on Science, Space and Technology is likely to be Eddie Bernice Johnson, a black woman who — and this is a large change — actually believes in science. That’s wonderful too, but new legislation emerging from the House would have to somehow get through the Senate, which became redder on Tuesday, and through the president, and then it would somehow have to survive review by the courts, which the president can continue to pack with hard-right ideologues.

And most devastatingly, in those places where activists tried to take matters into their own hands and pass truly serious changes, the money power of Big Oil simply crushed them. 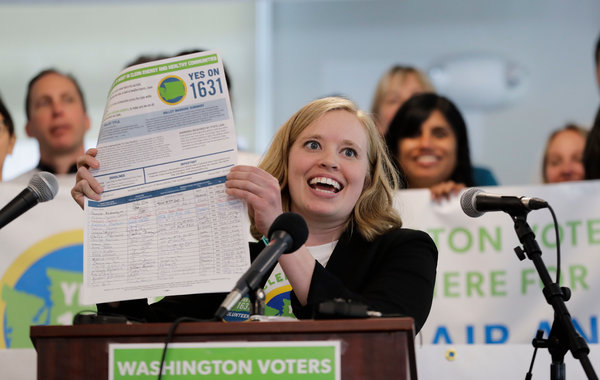 I can’t find the words sufficient to praise activists in Washington State who worked tenaciously to get a carbon tax on the ballot, or those in Colorado who fought their hearts out for modest setbacks for new oil and gas projects, including fracking wells, so that drill rigs wouldn’t loom over people’s houses. In both cases early polling showed substantial leads for the proposals. Heck, that noted radical, Bill Gates, came out for Washington’s carbon tax. But then Big Oil simply overwhelmed the efforts with money.

Spending on the Washington initiative broke all records in the state. In Colorado activists were outspent 40-1. Every time you turned on the TV in those states, a commercial warned that these ballot measures would destroy the economy. There apparently wasn’t enough airtime available to soak up all the money, so if you were driving the highways around Denver you’d pass trucks towing billboards denouncing any effort to restrict fracking.

Even where climate campaigns were well-funded (the billionaire Tom Steyer poured at least $17 million into an effort for more renewable power in sunny Arizona), the industry spent substantially more, and that spending was enough to defeat change. Most places, though, the money was virtually all on one side, and there was just so much of it. San Luis Obispo County in California has less than 200,000 registered voters and yet the oil industry spent more than $8 million to beat a fracking ban. In one county.

So one message is clear. Along with working hard in states from Maine to New Mexico where progress is far more possible after Tuesday’s legislative gains, environmentalists will have to figure out how to focus fire on the fossil fuel industry itself, to see if somehow its political power can be broken.

Some of that is already underway. A divestment movement that I’ve helped to direct has grown rapidly, with endowments and financial portfolios worth $6 trillion joining in. But such efforts need to keep growing, to call to account the banks and insurance companies that bankroll the coal, oil and gas investments that science tells us we can no longer afford to be making. Investors can theoretically move more nimbly than politicians, so it makes sense to pressure them, even as we continue working for a political realignment.

Bill McKibben teaches environmental studies at Middlebury College and is the author of the forthcoming book “Falter: Has the Human Game Begun to Play Itself Out?”