Last year, Liuba Grechen Shirley, who’d recently founded a Long Island chapter of the national Resistance group Indivisible, tried to get her Republican congressman, Peter King, to attend a town hall. He refused, telling a local radio host, “It really diminishes democracy if you’re going to show up to a meeting to just scream and yell.” Instead, he said, he was appearing on “every national TV show,” as if that were a substitute for facing his constituents.

On Tuesday, he may wish he’d just showed up. Frustrated by a representative who didn’t represent her, Grechen Shirley decided to challenge King. She’s giving him what the The New York Post called “the toughest race of his career,” a race that’s emblematic of a season in which fed-up women are upending the political status quo.

Grechen Shirley is 37; King has been in office since she was 12. She has a 2-year-old and a 4-year-old, and before 2016, she hadn’t considered running for office anytime soon. To make her campaign feasible, she successfully petitioned the Federal Election Commission to allow the use of campaign funds for child care.

[Listen to “The Argument” podcast every Thursday morning with Ross Douthat, Michelle Goldberg and David Leonhardt.]

“Politics wasn’t set up for people like me to run,” Grechen Shirley told me. Besides being a young mother, she’s not wealthy, and she hasn’t spent her adult life building political connections. But the calamity of Donald Trump’s election has motivated a flood of people who never saw themselves as politicians to seek office, including a record number of women. 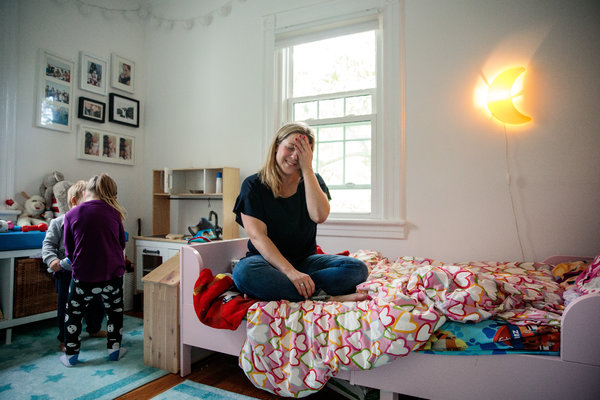 The last two years have been a stress test for American democracy, and they’ve revealed this country and its worst and at its best. We’ve seen how quickly an entire political party, with shockingly few exceptions, has capitulated to authoritarianism, white-nationalist demagogy and naked cruelty. Trump’s Republican Party has shattered whatever was left of the civic compact binding this country together, abandoning American ideals that transcend blood and soil, and American values that transcend brute power. It’s fitting that the president is closing this political season with an ad so racist that even Fox News has pulled it off the air.

Yet if the past two years have given lie to the myth of American exceptionalism — a system that elevates a person like Trump is by definition not the best in the world — they have also revealed an enduring strain of actual American greatness. Movements like Trump’s thrive on social decay and atomization. Millions of Americans who oppose Trump have responded to him with an enormous civic revival. They have marched, organized Resistance groups, and reinvigorated American politics at every level. In the face of an existential threat to democracy, they’ve rededicated themselves to its practice.

Leading it all, of course, have been progressive women. The Resistance group Indivisible says that women have organized most of its chapters. It was overwhelmingly women who responded to the dystopian pageant of Trump’s inauguration with the largest single-day protests in American history. African-American women mobilized in Alabama to save us all from a Senator Roy Moore. There are 260 women running for Congress, 200 of them Democrats, several of them making motherhood a central part of their political pitch. According to a recent CNN poll, women prefer Democratic control of Congress by 27 percentage points.

After Trump’s election, I was in a state of deep grief that didn’t begin to lift until April 2017, when I went to Georgia to cover the special congressional election in the Sixth District. Democrat Jon Ossoff didn’t win, but I was inspired by all the women — some of whom had been largely apolitical before Trump — pouring supernatural amounts of energy into organizing their community. Last month I went back to that district, and found the women more active than ever. “I don’t think there’s any way to go back to being the same person I was before 2016,” said Jessica Zeigler, who since we first met had quit her job to work full-time as a progressive organizer.

This year, the Democratic candidate in the Sixth District is Lucy McBath, who became a gun control activist after the 2012 murder of her son, Jordan Davis. The Cook Political Report just moved the once solidly Republican district into the tossup category, likely due to both new voters energized by Stacey Abrams’s historic campaign for Georgia governor and the movement that local activists started building last year.

Cook still rates Grechen Shirley’s district as “likely Republican,” but she has out-raised King in the last two quarters, and she’s convinced there’s going to be an upset. “We are absolutely going to win,” she told me.

America is far from unique in seeing a faux-populist despot come to power. What is unique — even exceptional — is the way masses of Americans, particularly American women, have revolted against Trumpism. (The closet analogue might be the women who rose up against Silvio Berlusconi in Italy.) “I think we’re going to transform not just the party, but transform Congress, transform the way government works,” Grechen Shirley said of all the novice politicians running as Democrats. “When you have more voices at the table, you’ll have a more equitable society.”

The fact that Trump became president is a sign that this country was deeply broken. In 24 hours we’ll find out if women can repair it.

Michelle Goldberg has been an Opinion columnist since 2017. She is the author of several books about politics, religion and women’s rights, and was part of a team that won a Pulitzer Prize for public service in 2018 for reporting on workplace sexual harassment issues. @michelleinbklyn