Opinion | Should We Show Photos of Victims of Gun Violence?

More from our inbox: 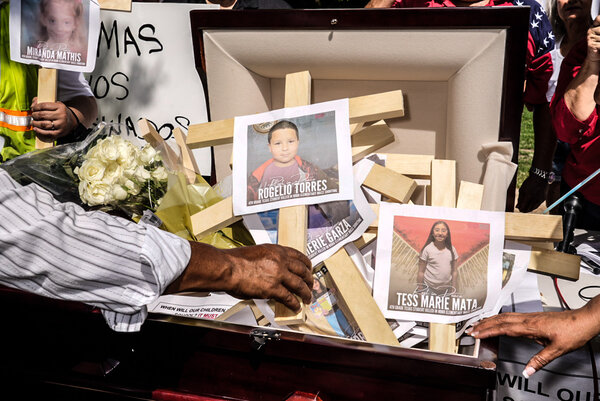 Re “Show Us the Victims of Uvalde,” by Susie Linfield (Opinion guest essay, Sunday Review, June 5):

Our nation and the world should not be further traumatized with photos of slain children or of the many adults massacred by the combination of military-style weapons and delusional young men. Ms. Linfield is surely correct that such photos, alone, would not spur effective action.

Still, I believe that before and after death photos, especially of the children, ought to be presented to every AR-15 manufacturing company owner, manager and director, and the same for ammunition makers.

In short, those who have enriched themselves through unrestricted weapons sales and clever marketing, if not outright fear-mongering, deserve to see, graphically and completely, all the results of their work.

Susie Linfield makes a compelling argument for displaying photographs of victims of the Uvalde school massacre publicly as a means of garnering more support for gun safety measures. The issue obviously raises some searing considerations for parents or relatives of the dead who presumably, like Emmett Till’s mother, would have to consent to the publication of the pictures.

But there’s another photograph from the tragedy whose public display could have beneficial effects and is subject to fewer complexities: a picture of the shooter slain by law enforcement personnel. Seeing his dead body and that of others like him who have committed mass shootings and then were fatally shot by their own hands or by others might deter some would-be copycats from wanting to be portrayed that way. It also might motivate parents, kin or others aware of persons with dangerous propensities to alert the authorities before disaster occurs.