Opinion | Should Californians Shake Our Fists at the Sky or Thank the Heavens?

An orchard in Corcoran, Calif.Credit…Adam Perez for The New York Times

Mr. Arax is a writer whose most recent book is “The Dreamt Land: Chasing Water and Dust Across California.”

FRESNO, Calif. — Here in Fig Garden, a suburb that creeps up to the edge of the San Joaquin River, on land my neighbors prefer not to think of as a floodplain, the rain started falling in late December and didn’t stop for two weeks. My lawn turned into pond. Geese were honking like they haven’t honked in years.

As the last big storm was nearing, I got a call from my aunt and uncle, California natives who high-tailed it to Cleveland a half century ago. “You guys all right?” they asked.

The pond had yet to reach my front door. “I think we’re going to be OK,” I said.

I reminded them that there are seven dams on the San Joaquin. I don’t know of any other river in America that has been more corralled by man. Over 90 percent of its flow is shunted via canals and ditches to farmland that produces almonds, pistachios, table grapes and mandarins. “Food Grows Where Water Flows,” shout the signs hanging from used-up cotton trailers along Route 99.

“Yes, I understand all that,” my aunt said. “But I heard on the news that a bomb cyclone is headed your way.”

I am a chronicler of menace as all California writers eventually come to be, but in all my years writing about this place, I had never heard of such a thing. Then the storm blew through like any other. I decided to chalk up the bomb cyclone to some bored meteorologist who, like Charles Hatfield, the notorious California “rainmaker” in the 1910s, needed a new way to sell a storm. 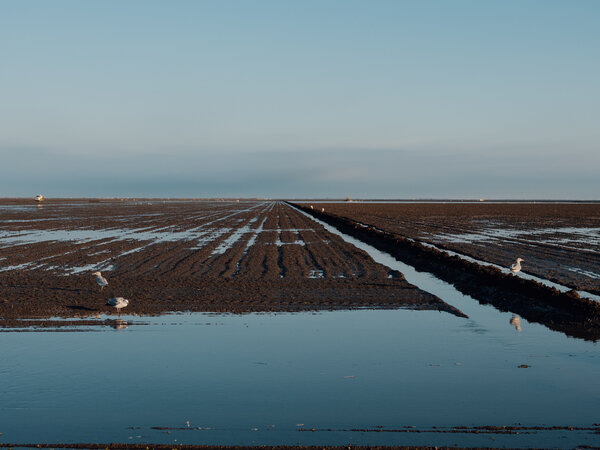 The great deluge of 2023 has come and gone and left us Californians wondering what to make of it all. Do we shake our fists at the sky or thank the heavens? How to apprehend the loss of life and property alongside the gift of rain and snow that might break a decade’s drought?

In a state a thousand miles long with 100 million acres of wildly different landscapes inside it, the way we tell the story depends on which California we call home.

I’ve been through a handful of floods, and they needed no hype: 1964, 1969, 1982 to 1983, 1986, 1995, 1997, 2005, 2017. A flood year always breaks the drought years, or so my grandfather the raisin farmer told it. Drought is California. Flood is California. In the wettest years, rain and snowmelt coming down the rivers produce some 200 million acre-feet of water. In the driest years, they produce 30 million. Between the extremes lies an average year, which happens so infrequently that it is a myth we tell ourselves. As long as we keep faith in the average, it is us and not nature in command.

Flooding along the Sacramento River

After rain from sequential storms soaked California’s Central Valley, muddy water from the Sacramento River filled floodplains to the west.