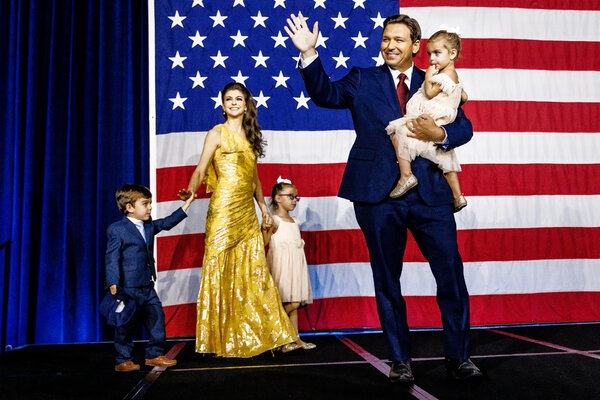 Frank Bruni is a contributing Opinion writer who was on the staff of The Times for more than 25 years.

After decades of closely observing and writing about American politics, I’m accustomed to the runaway religiosity of many political campaigns and to a whiff of theocracy in our democracy. But an ad that Gov. Ron DeSantis of Florida released in the final days of his successful re-election bid nonetheless took my breath away.

It’s possible you didn’t see it or read about it in the whirl of news and nervousness as the midterm finish line neared. But you must. And you must take in — and be prepared to take on — the staggering hubris and flamboyant piousness in it. In him.

Tweeted by his wife, Casey, with the apparent expectation that it would draw notice and go viral, it casts DeSantis not merely as a model and promoter of selected (and selective) religious principles — that’s commonplace for Republican leaders — but as a divine instrument, a holy messenger, fashioned precisely into his current form and set specifically on his present mission by God.

In little more than 90 seconds, its unseen narrator mentions “God” 10 times, beginning with the assertion that “on the eighth day” God gazed at a newly created world and decided that it needed a protector. “So God made a fighter,” the narrator says — sonorously, somberly. That’s the ad’s refrain, intoned again and again, and accompanied each time by a shining, commanding image of DeSantis.

The words seem to be a tweak of ones in a well-known speech, “So God Made a Farmer,” that the radio personality Paul Harvey delivered in 1978 to what was then known as the Future Farmers of America. But I don’t care about the precedent for the ad. I care about its implications. Or perhaps I should say its revelations.

It makes clear, for starters, just how nuttily grand DeSantis’s sense of himself and his destiny is, an evaluation that the size and nature of his victory in the midterms is sure to cement. He beat his Democratic challenger, Charlie Crist, by nearly 20 percentage points. He won Miami-Dade County, a supposed Democratic refuge in a state that has turned increasingly red over the past decades. “We have rewritten the political map,” he crowed to his supporters at a victory party on Tuesday night. “Thank you for honoring us with a win for the ages.”

Following that triumph, my colleague Ross Douthat raised the possibility that DeSantis is now the 2024 Republican presidential front-runner and cast him as an example of how potent a Trump heir with more emotional stability and administrative competence could be:

Crucially, the DeSantis theory emphasizes, “normal” doesn’t have to mean “squishy.” Instead, his sweeping success in Florida proves that you can be an avatar of cultural conservatism, a warrior against the liberal media and Dr. Anthony Fauci, a politician ready to pick a fight with Disney if that’s what the circumstances require. You just also have to be competent, calculating, aware of public opinion as you pick your fights and capable of bipartisanship and steady leadership in a crisis. The basic Trump combination — cultural pugilism and relative economic moderation — can work wonders politically; it just has to be reproduced in a politician who conspicuously knows what he’s doing‌ and who conspicuously isn’t Donald Trump.

To me, DeSantis doesn’t seem quite so levelheaded. He picks and hypes battles designed to cast him as some conservative superhero. In that regard he’s histrionic and hyperbolic, and I could easily see him overplaying his hand, especially in regard to religion. The “God” ad signals that any presidential bid by DeSantis, who is clearly plotting one, will aggressively court Christian nationalists and, in the process, empower them. That was already becoming clear from his penchant for foregrounding biblical references in his oratory. During an appearance last February at Hillsdale College in Michigan — which is, of course, a pivotal presidential battleground state — he exhorted the audience: “Put on the full armor of God. Stand firm against the left’s schemes. You will face flaming arrows, but if you have the shield of faith, you will overcome them.”

DeSantis may need to use whatever shield he carries against Trump first. The former president and his minions are showing greater and greater annoyance with DeSantis’s success and, in particular, the signs that DeSantis would seek the 2024 Republican presidential nomination regardless of whether Trump announces his own bid. Early this week, Trump suggested to a group of reporters that he had dirt on DeSantis and was prepared to spill it. “If he did run,” Trump said, “I will tell you things about him that won’t be very flattering. I know more about him than anybody other than perhaps his wife.”

That’s highly unlikely to deter DeSantis, given how celestially high on himself he is. He brings to his political ambitions not just the customary cockiness but a more sinister zeal and grandiosity. No wonder he gets under Trump’s skin. They’re megalomaniacs of a feather.

Have feedback? Send me a note at [email protected]