The venerable art of blacksmithing is not generally considered to be a radical act. But for Michael Martin, a 36-year-old Mennonite from Colorado Springs, the malleability of glowing metal from a forge’s inferno makes it the perfect vehicle for addressing gun violence.

Mr. Martin, a former youth pastor, was inspired to learn blacksmithing after the Sandy Hook Elementary School massacre in 2012, in which a deranged young man with an AR-15 assault rifle killed 20 children and six educators. Three months later, Mr. Martin started Raw Tools, a nonprofit organization dedicated to converting the “swords” of contemporary America —- handguns, assault weapons and semiautomatic rifles —- into garden tools, or erstwhile plowshares, at once fulfilling the Old Testament mandate and forging a new kind of public ritual for processing grief.

Laurie Works, 29, was 18 years old on Dec. 9, 2007, when a gunman in Colorado Springs randomly opened fire on the family minivan, killing her twin sister, Stephanie, and her younger sister, Rachel. Her father was wounded in the attack.

This year, at a rally to ban assault weapons, she stepped up to Mr. Martin’s anvil to hammer the magazine of an AR-15 that would soon become a hoe to coax new growth from the soil. It was a model similar to the gun used in the carnage from which she will never fully recover. But the experience at the anvil “was transformational,” she said — literally and psychically. “It was something tangible,” she explained. “I could feel the tension in my body releasing. A weight was gone.”

The weapons Mr. Martin disarms are typically unwanted firearms donated by individuals, sometimes after the suicide of a loved one. Many also come through police department buyback programs, in which guns are surrendered anonymously, often in exchange for gift items.

On a fall morning recently, Mr. Martin and two avuncular mentors, including his father, Fred, set up a pop-up smithy at the entrance to the Police Headquarters in New Haven. They were there at the behest of the Newtown Action Alliance, founded in the aftermath of Sandy Hook. The alliance worked with the police department, Yale-New Haven Hospital, the state’s Department of Correction, and a network of faith leaders to bring a novel idea to fruition: Mr. Martin would teach soon-to-be-released inmates how to make garden tools from 141 guns gathered during a buyback.

The resulting implements —- dandelion diggers and spades from handguns, double-sided hoes from thick-barreled assault rifles — would be used to grow vegetables at two public agricultural high schools and at community gardens throughout the city. Come harvest, the produce would then be donated to city food banks and homeless shelters.

“You’re taking a weapon of death and turning it into the complete opposite, which is life,” said Steven Yanovsky, the Alliance’s communications director, who spearheaded the effort. “So you go from a rifle or a handgun to carrots.”

That day, with the air acrid from hot metal, four inmate volunteers ranging in age from 26 to 38 donned heat-resistant welding gloves and assembled around a portable forge and anvils affixed to tree stumps. They worked in pairs, a blacksmithing arrangement known as “team striking”: one partner lifted the molten barrel of a .22 rifle with tongs and held it still on the anvil while the other hammered and shaped the piece, piercing a hole in the center to accommodate a wooden handle.

As a Mennonite, Mr. Martin comes from a long tradition of nonviolence and considers his work a form of conscientious objection (“raw” is “war” spelled backward). The first gun he converted into a garden tool came from a friend in Colorado Springs who wanted to get rid of an AK-47 he had bought for protection after the Sept. 11 attacks.

Since then, Raw Tools has transformed several hundred guns, with help from a “disarming network” of volunteer blacksmiths around the country. With the exception of a tattoo on his arm in which “War No More” is scribbled on a fig, Mr. Martin resembles the tools he makes —- simple, direct and without embellishment. He relies on small grants from local foundations and Mennonite organizations. “Our work,” he said, “is about a cultural shift, to get communities and neighborhoods to rethink the tools they use to keep themselves safe.”

Despite his rather low-key mien, Mr. Martin’s influence has been far-reaching, inspiring similar efforts around the country. In 2016, a group called New Mexicans to Prevent Gun Violence started funding “guns to gardens” buybacks under Mr. Martin’s tutelage.

Another offspring is Lead to Life, based in Oakland, Calif. At events last spring in Atlanta for the 50th anniversary of the assassination of the Rev. Dr. Martin Luther King Jr., the group’s founders, Kyle Lemle, 29, and Brontë Velez, 24, held “gun melting and transformation” ceremonies with metal artists from Minneapolis and Atlanta. Families from Atlanta who were affected by violence took turns placing guns in the forge. They then worked with the Atlanta community to plant 50 trees with 50 shovels made from guns, using soil from lynching sites to promote “healing justice.”

Given the pervasive nature of the gun issue —- an estimated 4.6 million children living in homes in which at least one firearm is stored loaded and unlocked —- the weapons that Mr. Martin and his colleagues transform are barely a ripple in the torrent. Mr. Martin does not pretend that garden tools are the solution to the nation’s gun problem.

But symbols can be powerful, and public rituals can heal. For those who have survived violence or lost loved ones, turning a weapon into a productive tool “can mark a time in one’s life when violence is behind them and creation in front of them,” Mr. Martin said.

In New Haven, the buyback that yielded 141 guns was the police department’s largest since the program began in 2011 — in large part in response to news of the “Swords to Plows” effort and the involvement of the Newtown Action Alliance. 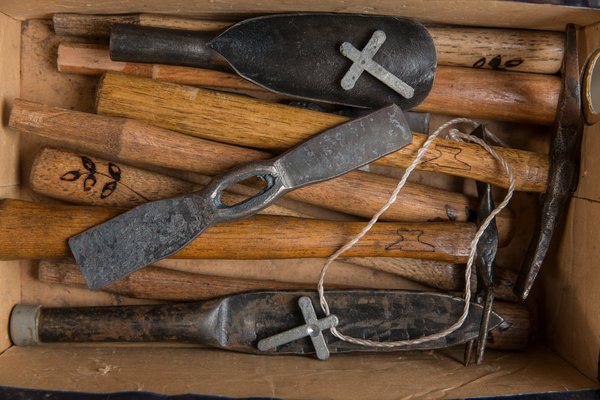 New Haven has a long history of gun violence and was once home to the Winchester Repeating Arms Company, makers of automatic rifles. Buybacks contribute to public safety, along with public education about gunlocks and other measures, said Police Chief Anthony Campbell, a graduate of Yale Divinity School who regards his occupation as a ministry. Chief Campbell has dealt with guns beyond his work: Six months after his college graduation and nine days before Christmas, his father committed suicide with the service revolver his mother used in her work as a corrections officer at the Rikers Island prison in New York. Two bullets — one to the chest, one to the head — upended his family’s life.

The combination of suicide and guns in the home is particularly lethal: a study by the Harvard T.H. Chan School of Public Health of all 50 states has shown a powerful link between the rates of firearm ownership and suicide. The decision to embrace Raw Tools as a public model, the first for a major police department, “pushes the conversation about gun safety,” Chief Campbell said, particularly in neighborhoods where community gardens flourish amid gunfire. “It honors what that community is trying to do: take weapons, destroy them and use them for edification, beautification and growth,” he said.

Public health experts like Pina Violano, the manager for injury prevention for Yale-New Haven Hospital, which finances the buybacks, argues that the scope of the gun issue makes creative and nontraditional approaches necessary. One inducement she devised for teenage gun owners to participate in the buyback is free time at a local recording studio.

In another unorthodox approach, the Harvard Injury Control Research Center at the T.H. Chan School of Public Health is working with gun trainers to encourage them to talk with clients about suicide and safe gun storage. David Hemenway, a professor of health policy and the center’s co-director, noted that “a big part of past successes has been changing the symbols” —- whether it is drinking and driving or smoking in movies (once glamorous, now less cool). “Perceptions change,” he added, “and you never know where the tipping points are.”

Until the tipping point arrives, Mr. Martin will continue to get spikes in requests after every mass shooting from gun owners who want out. Now, in response to the murder in a Pittsburgh synagogue of 11 Sabbath worshipers, he anticipates another. “It’s an emotional decision,” he said of a gun owner’s readiness to part with a weapon. “We lose that window of opportunity if we can’t get to them in a week.”

To make access easier, Mr. Martin has begun to set up Raw Tools satellite locations: the first is at the Toledo Mennonite Church in Ohio. He is aiming for a second site in New Haven and plans to leave his tools there (a blacksmith station costs roughly $2,000).

Before Mr. Martin arrived in New Haven, a police van loaded with guns from the buyback pulled up to the studio of Gar Waterman, a local metal sculptor. With sparks flying, Mr. Waterman and two activist Episcopal bishops who knew their way around hand saws and hot metal began dismantling the guns, including what Mr. Waterman called “a very cheap AK-47 knockoff.”

Encased in coffin-like white cardboard boxes, the guns kept coming in relentless succession. Collectively, of course, they represented a drop in the bucket compared with the more than 300 million guns that are out there. But as James Curry, a retired Episcopal bishop suffragan, observed: “Buckets get filled by drops.”

Patricia Leigh Brown, a former reporter at the New York Times, writes on culture and community for The Times and other publications.

To receive email alerts for Fixes columns, sign up here.