Opinion | How Do You Fight a Drought When It’s Flooding? 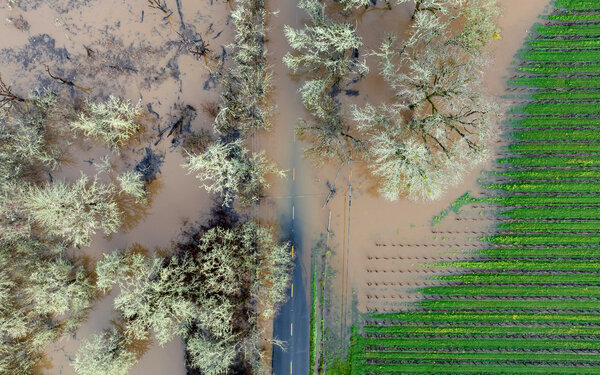 California is built upon the great gamble of irrigation. Left alone, much of the land in the Western United States would be inhospitable to teeming cities. But we’re Americans — we couldn’t let the desert stand in our way. More than a century ago, the United States Bureau of Land Reclamation began taming the water in the West. It’s been a remarkably successful project. In California, where I live, irrigation has turned largely barren regions into some the country’s most fertile farmland and most prosperous metropolises. We’ve built “the most ambitious desert civilization the world has seen,” Marc Reisner put it in “Cadillac Desert,” his 1986 history of Western irrigation.

I’ve been thinking a lot about “Cadillac Desert” in the past few weeks, as the rains fell and fell and kept falling over California, much of which, despite the pouring heavens, seems likely to remain in the grip of a severe drought. Reisner anticipated this moment. He worried that the West’s success with irrigation could be a mirage — that it took water for granted and didn’t appreciate the precariousness of our capacity to control it. “Everything depends on the manipulation of water — on capturing it behind dams, storing it, and rerouting it in concrete rivers over distances of hundreds of miles,” he wrote. “Were it not for a century and a half of messianic effort toward that end, the West as we know it would not exist.”

But what happens to that century of irrigation when the weather changes, as it is now? Experts say that climate change is exacerbating “weather whiplash” in California — that we’ll increasingly suffer years of prolonged, extreme aridity followed by great biblical gushers of precipitation. Can a society adjust to a climate of opposing calamities — a climate of both megadroughts and atmospheric rivers, of far too little and far too much?

Just psychologically, this is a difficult balance to maintain: It’s hard to worry about drought when it’s flooding. It’s hard to worry about flooding when there’s a drought. Adjusting infrastructure and water usage to the seesawing weather is going to require some big and possibly painful changes to many of the state’s key constituencies. Farmers will have to give up some agricultural land and grow different crops. Homeowners and developers might have to leave some flood-prone areas uninhabited. We’re going to have to alter our cities to capture more water and alter our lifestyles to use less of it.

California’s water system “was designed and built and is operated for different climatic conditions — for the climate of the 20th century, not the 21st century,” said Peter Gleick, a co-founder and senior fellow at the Pacific Institute. Gleick says there’s some reason for optimism that we’ll be able to tackle this problem — at least California’s government understands and is determined to address the changing weather. Still, Gleick said, “given what we now know about the unavoidable changes of climate change, our policymakers are not doing enough.”

California’s precipitation patterns are naturally variable — we have always had very dry years and very wet years, and quick shifts from droughts to floods are not unheard-of. But climate change is supercharging this phenomenon. A recent state climate report found that year-to-year weather variability has increased sharply since the 1980s. Anyone living in California over the past decade has seen this firsthand. Between 2012 and 2016, California suffered one of its worst droughts on record. Then, in 2017, we had one of the wettest years on record. Then California and much of the Western United States went back into severe drought, again with some of the driest years ever recorded; a report published in Nature Climate Change last year found that the years between 2000 and 2021 might be the Southwest’s driest 22-year period in 1,200 years. And then, this winter, another deluge.

It’s not just that wet years bring more water; it’s also how the water is falling. Because temperatures are warmer, a lot more of California’s precipitation has in recent years been falling as rain instead of snow. This is a problem for a few reasons. Snow acts as a kind of “frozen reservoir” that stores water from one season to another — the snow falls in the winter, then trickles into California’s water supply as it melts. But when precipitation falls more heavily as rain — and when the storms come in quick succession, as they have recently — water isn’t as easily stored and instead becomes destructive. A 2019 study published in the journal Water Resources Research found that the risk of flood grows as snowfall shifts to rainfall and that floods driven by rain can be much larger than floods driven by snowmelt. When rain falls on snow, the snow melts faster. And when rain pours on cities, little of it is captured for use — and instead washes out to sea.

And so we’re left with this surreal phenomenon of a flood-drenched drought. As the storms pounded California last week, water-management officials were telling people not to go wild with water: “We’re kind of dealing with this extreme flood during an extreme drought, and so we’re, of course, encouraging Californians to continue to conserve water and make conservation a way of life,” one official told The Los Angeles Times.

Water experts say there are ways to mitigate the effects of California’s changing climate on our water supply. Gleick has called for revamping national flood insurance regulations to curtail rebuilding in places that are newly prone to flooding. Leaving some places undeveloped and allowing areas to regularly flood will help recharge California’s groundwater supply, he said.

Capturing storm water is another big opportunity. For years, Los Angeles County has been working on a gigantic effort to collect more rainfall for use. Among other projects, the plan involves creating huge “spreading grounds” — tracts of land where rainwater is allowed to pool and soak into the ground; installing rain barrels and other ways to collect water in apartment buildings and at businesses; and building water-absorbing infrastructure into roadways and sidewalks, like drainage ditches and pavement made out of materials permeable to water. Officials reported collecting 33 billion gallons of water in the recent storms — enough for more than 800,000 people for a year. Expanding such efforts statewide could yield lots of new water.

It’s also clear that California’s agricultural sector has got to use less water. Farming currently accounts for 80 percent of California’s water use. In drought years, lots of the agricultural water is pumped from underground, a practice that experts say cannot be sustained. Farmers can reduce this amount by growing more efficient crops — at the moment too much of our land is used to grow water-hogging crops like alfalfa and almonds — but even so, the agricultural sector will have to get smaller. Farmland will need to be fallowed — at least 500,000 acres, according to researchers at the Public Policy Institute of California.

Gavin Newsom, California’s governor, has not been hiding from these issues. Last summer he proposed a big plan for recycling more water and expanding storage. During the recent storms he called for $200 million more for levies and other flood protection measures.

But adjusting California’s water infrastructure to the shifting weather patterns will need to be a long-term, sustained effort, and it will require political bravery. Newsom’s plans did not call on agriculture to make many sacrifices.

As floods-amidst-droughts continue, he and other politicians will need to make difficult decisions. The desert won’t be kept at bay for long.

Farhad wants to chat with readers on the phone. If you’re interested in talking to a New York Times columnist about anything that’s on your mind, please fill out this form. Farhad will select a few readers to call.

The Times is committed to publishing a diversity of letters to the editor. We’d like to hear what you think about this or any of our articles. Here are some tips. And here's our email: [email protected].