Opinion | Election’s Over, Let’s Have a Rant

Wow, the elections. I understand that in Florida people are planning recount parties that involve sitting around and drinking until January.

How would you say the whole process worked? Well, it would be nice if every American had a right to vote that didn’t involve standing in line in the rain for three hours.

Also, we’ve learned that voting for third-party candidates is a bad idea. It’s sort of sad. Voters like to register dissatisfaction with their real options by checking off an attractive-sounding name. Like Green, or Libertarian, or Paper-Trained Puppies.

All right, there isn’t a Puppy party at this very moment, but it’s just a matter of time.

“A third party will always be a spoiler one way or the other,” said Sean Wilentz, an expert on American political history at Princeton. In the end, Wilentz said, people who vote for a third party often wind up helping the candidate they’d least like to see win.

Take the Senate race in Arizona. On election night, it looked as if Kyrsten Sinema, a Democrat with a history of supporting environmental causes, might lose because the Green Party siphoned off about 2 percent of the vote.

A few days before the election the Green candidate, whose name happened to be Angela Green, actually announced she was supporting Sinema. But I think I speak for all Americans when I say that dropping out of a statewide race after the ballots have been printed and a lot of folks have already voted is not a good political strategy.

It looks now as if Sinema may have squeaked out a win, although we’ll have to wait until after recount party season to be sure. The Green Party says it had nothing to do with Angela Green being on the ballot, for reasons way too complicated to discuss over a weekend. Either way, nobody forced Arizona voters to decide that, in a critical and hard-fought battle for a major office, they’d ignore the actual contestants and just go for Green/Green. 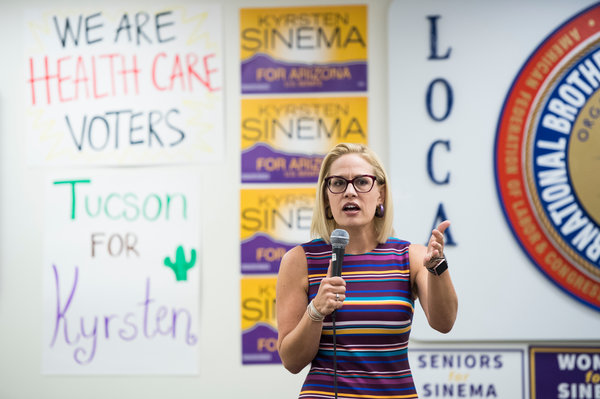 Same story in Florida, scene of a very intense and hard-fought gubernatorial election between two guys from the opposite ends of the political spectrum. Yet a number of voters felt it was a good plan to go for other options — like a 34-year-old independent with a campaign war chest of $7,000 who nevertheless got 14,474 votes.

Stay tuned. We won’t know for sure about anything in Florida for a while, and probably a very messy recount or two or three.

Pop Quiz: Why do they keep having election crises in Florida?

A) The ghost of Ponce de Leon haunts the polling places.

B) Floridians just like to watch people count stuff.

C) Too much distraction from Gov. Rick Scott’s shiny head.

D) None of the above.

I know you liked C, but the answer is none of the above. Florida’s biggest problem is close elections. We almost never have these crises in New York because we have very few actual competitions. Believe me, if Kirsten Gillibrand had not gotten two-thirds of the vote in our Senate race, you would have a lot more complaining about the way damp ballots in New York City jammed the election machines.

But about third parties. There are ways to deal with them without totally discounting a lot of votes. Maine has come up with a system where everybody can rank their preferences on the ballot. If nobody gets over 50 percent of the first choices, the last candidate gets tossed out and her supporters’ next preferences come into play.

Why didn’t anybody think of this before? “Well, it’s been used in Australia for 100 years,” said Lee Drutman, a senior fellow at New America, a nonpartisan think tank.

If we talk about this long enough we will have to go back to the 2000 election where Ralph Nader’s third-party run gave Florida to George W. Bush. I have talked with Nader about this a number of times, and he still feels O.K. about it. He refrained from running in 2016, but he didn’t vote for either Donald Trump or Hillary Clinton.

“They’re not alike, but they’re both terrible,” he said at the time.

Now this is the problem, people. Even if both candidates in a major election seem terrible, deep in your heart you know one is more terrible than the other. Refuse to acknowledge that, and you’re skipping down the path toward Donald Trump.

Two years ago, many Americans thought Trump was a lunatic and Hillary Clinton was a depressing rehash of everything that was uninspiring about the Democratic Party. In Michigan, 51,463 of them showed their disapproval by voting for Green Party candidate Jill Stein. Trump won Michigan’s 16 electoral votes by 10,704. Same basic story in Wisconsin and Pennsylvania.

Most of these voters undoubtedly thought they were just registering a protest on the choices available. We will presume a majority did not actually want to put a man in the White House who would kick out his attorney general and replace him with a terrible choice, and then defend said choice by saying he’d never met the guy.

The moral is that there are worse things than voting for the lesser of two evils. We wake up to him every morning.

Gail Collins is an Op-Ed columnist, a former member of the editorial board and was the first woman to serve as Times editorial page editor, from 2001 to 2007. @GailCollins • Facebook