Readers mostly laud the president’s speech and sweeping plans. “I take back every bad thing that I said about Joe Biden during the primaries,” one reader says. 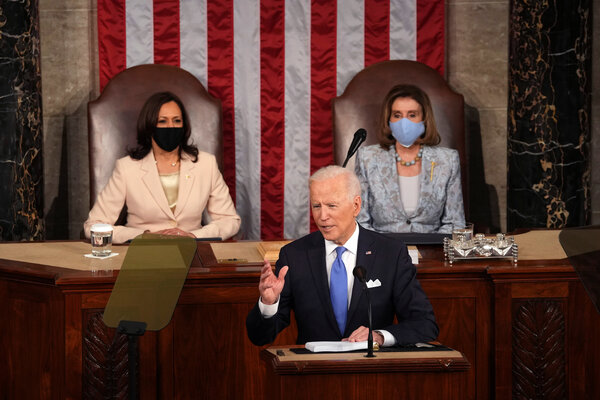 I take back every bad thing that I said about Joe Biden during the primaries.

President Biden is actually arguing for investing in Americans and America, even saying that trickle-down economics never worked. This is the first time I have heard a Democratic president truly talk like a Democrat in five decades of watching politics. Mr. Biden understands, like Lincoln (and modern Republicans), that you have to mold public sentiment, not just follow a mythical center to the right.

Mr. Biden understands that you ask for what you want, then compromise at the end of negotiations.

President Biden’s speech to Congress and the nation was a passing of the baton from squeezing American government into a smaller and smaller box (Ronald Reaganism) back to a more expansive and supportive role for government (Lyndon Johnsonism). The wealthiest 1 percent of Americans and large corporations prospered mightily, even obscenely, during Reaganism. Now it’s time for the rest of us to see a better and more equitable economy.

The significance of President Biden’s speech was beyond all the policy agendas he laid out — we knew most of them already. Mr. Biden’s purpose (which I think was achieved) was to show that he is not Donald Trump, that he is an intelligent, plain-spoken, experienced public servant who is in control, and who can lay out his positions with down-to-earth words and logic and appeal to our hopes and dreams without using fear or lies. The simple, easy-to-follow quality of his speech was something I’m not sure even Barack Obama achieved.

Joe Biden stood before the nation and simply smiled, and gave a modest sermon on peace and prosperity that any voter would like, or at least consider. And like many sermons, the main purpose was to soothe and reassure.