Opinion | An Olive Branch in Montana

My hope for release from the nightmare of our waking political world was waning as I went to bed on Tuesday night. Although I live in Massachusetts (which re-elected its intrepid Democratic senator) by way of Michigan (which elected a Democratic governor), I was keeping an anxious watch on the tight race in Montana, where it looked as though the incumbent Democratic senator Jon Tester might lose.

Yes, Montana. It is hard for most people on the eastern side of the Mississippi to believe that I have ties to the place. Once, when I was mailing a package from Ann Arbor to Whitefish, the postal clerk, a black man with whom I often joked, insisted that I had made a mistake on the address. “You don’t know anybody in Montana,” he insisted. I told him the package was for my sister-in-law, and that I did, in fact, know her. “Well, you’ve never been there,” he teased.

I have been there. I have lived in, visited, and driven through Montana’s cities, towns, and reservations for more than 25 years. I have researched and published on African-American history in the state. My husband is a Montana native, in both meanings of the phrase, and I have Native American as well as white relatives there. We all love Senator Tester, who is from a ranching family in Big Sandy (down the highway from my husband’s home reservation) because he is an old-school, boots on the dusty ground Democrat; because he wanted to hire my sister-in-law (a different one) as his liaison to Native communities; because he castigated Trump’s policy of separating immigrant families; and because he was willing to vote his conscience against Brett Kavanaugh. And Tester was under attack. 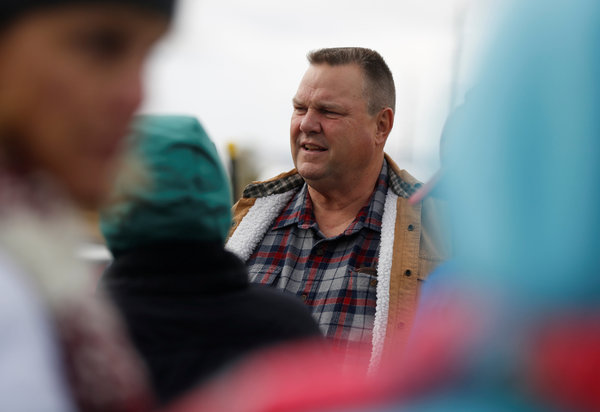 My mother-in-law was keeping count of how many times Donald Trump and Mike Pence had flown in to run Tester out of office. In the wee hours of the morning, it seemed as though their tactics had worked, that we would lose a rarity: a centrist Democrat in a rural state. But on Wednesday we learned that Tester has bested Matt Rosendale, a self-described “Trump conservative.” Montana has proved itself stalwart even if the contest was too close for perfect comfort.

I am keeping the faith in Montana and many places like it in the beet-red zone of the election map. That faith, reignited today, was kindled last summer by an unexpected olive branch. In the long weeks of July and August, when black people were being harassed by random white passers-by for grilling in public parks or selling bottles of water and when bad political news was emerging at a blistering, almost incomprehensible rate, I felt especially exposed as a black woman in Montana. In Kalispell, where I was staying with family, I looked over my shoulder while taking walks and avoided running on any street because so many residents carried guns.

In Bozeman, where my daughter was enrolled in an intensive dance workshop that culminates in a performance at the annual Sweet Pea Festival, I worried about leaving her alone with strangers. An African-American and Gros Ventre/Assiniboine teen, she wins no “identity politics” points in a state where bloody battles were fought by the United States military to drive American Indians onto reservations, where racial divides between whites and Native Americans are still keenly felt through geography and inequality, and where the black population is minuscule.

When my daughter and I arrived at the dance studio set against the backdrop of rugged peaks, we were not surprised to find that she was the only black girl and one of two visibly identifiable girls of color. We were huddled together, taking stock, when a neatly styled middle-aged white woman started toward us in a determined gait. A husband dressed in jeans, a western belt, a plaid shirt, and a cowboy hat accompanied her. I steeled myself, planning how I would defend my daughter against an anticipated racial slight.

“I noticed you two aren’t from around here. Neither are we,” the woman said. They had driven over from Glendive, a town five hours east near the North Dakota border — rural, insular, and white. Bozeman is no diversity hub, but compared to Glendive, it could be California. I watched the husband, bracing for his reaction to his wife’s overture and was stunned when he reached out a hand, introduced himself, and smiled all the way to his eyes. “If our daughters could meet,” the woman suggested, “maybe they won’t feel alone.”

This couple from a rural Republican state saw that our families had something in common, that we stood in this uncertain space together and might join purposes. This was something to reach for, to take solace in, the notion that there could be a “we.”

I am not naïve about race hatred or Montana. The state is home to headline-grabbing white supremacists in Whitefish, the lakeside town where the unapologetic neo-Nazi Richard Spencer is based. My husband arranged to rent a house online in Bozeman, only to be told the place was unavailable immediately after a Native American relative toured it on our behalf. Once when I stood at the sinks in a restaurant bathroom in Havre, a white woman walked in and screamed, exclaiming that she didn’t expect (or want?) to see a black person. And according to the Southern Poverty Law Center, hate groups grew in Montana following Trump’s election.

But the Glendive couple was working from a different cultural script, not penned by the alt-right but perhaps instead by Toni Morrison. In her recent collection of lectures, “The Origin of Others,” Morrison emphasizes the existential challenge and moral call to sympathize with the stranger. Morrison herself often takes inspiration from a text that used to be heralded in the Republican Party: the Bible.

I will never know if that couple voted for Trump in 2016, and I’m not sure that it matters anymore. I would like to think people like them who seek connection and reject division put Jon Tester over the line. Even in an unlikely place like Montana, Americans from diverse backgrounds can be compatriots. We still have a country, imperfect as it always was, but capable of holding back a force that would make strangers of us all.

Tiya Miles is a professor of history at the Radcliffe Institute for Advanced Study, Harvard University, and the author of “The Dawn of Detroit: A Chronicle of Slavery and Freedom in the City of the Straits.”