(Want to get this briefing by email? Here’s the sign-up.)

Here’s what you need to know:

The wildfires raging across the state have created a double nightmare for residents: Many of those trying to flee have found the roads to safety clogged.

As of Sunday night, the Camp Fire across more than 111,000 acres near the town of Paradise had killed 29 people, matching a 1933 blaze that was the deadliest in California history. Seven of the victims died in their vehicles.

And outside Los Angeles, a mass evacuation from a fire in the Malibu area has been hampered by congestion on the Pacific Coast Highway, leaving at least two dead. That blaze is expected to worsen in the coming days. Our Climate reporters explain why the state has so many wildfires.

• Video: Footage of the destruction.

• How to help: Research before you donate.

Listen to ‘The Daily’: The California Wildfires

At a ceremony in Paris for the 100th anniversary of the armistice that ended World War I, President Emmanuel Macron of France rebuked the nationalist impulses that are reshaping the world today.

“Patriotism is the exact opposite of nationalism,” Mr. Macron told world leaders at the ceremony. “Nationalism is a betrayal of patriotism by saying: ‘Our interest first. Who cares about the others?’ ”

The comments were widely interpreted as a rebuke of President Trump’s “America First” brand of nationalism, and highlighted how the two men’s relationship has soured.

• Security, or snub? Mr. Trump’s two-day visit to Paris was marred by the cancellation of his planned visit to an American cemetery. Aides said his helicopter couldn’t fly in the rain, but the decision went over badly.

• In photos: Here are some of the best images of the remembrance events. 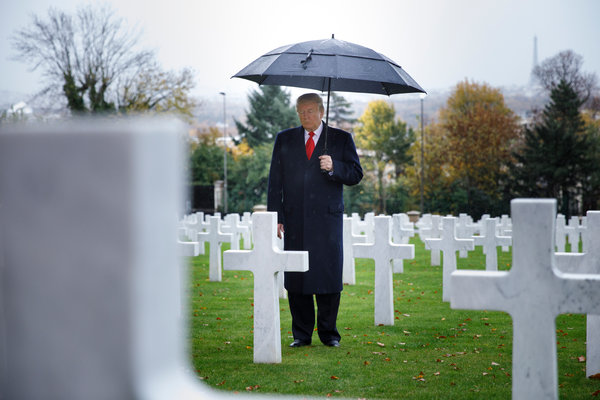 Winning control of the House may have been the easy part. Now the Democrats must find a way to execute their agenda while facing a president who disdains institutional norms. (“Don’t chase every ball that he throws” is how one representative described the party’s approach.)

Among their first moves: demanding that President Trump’s acting attorney general, Matthew Whitaker, who once said there was “no collusion” between the Trump campaign and Russia, recuse himself from overseeing the special counsel investigation.

• Election checks: Gov. Rick Scott of Florida is challenging the handling of ballots in three state races that are undergoing recounts. He says there was fraud, but the truth appears more complicated.

The disclosure indicates that top Saudi officials have considered assassinations since the crown prince, Mohammed bin Salman, began consolidating power, a year before the killing last month of the dissident Jamal Khashoggi inside the Saudi Consulate in Istanbul.

It may add to pressure on President Trump — who is ending air refueling flights for the Saudi military campaign in Yemen — to take stronger punitive measures against the kingdom.

• Seeking answers: The British foreign secretary is traveling to Saudi Arabia today to press Prince Mohammed and his father, King Salman, for information on the Khashoggi killing, two days after Turkey said it had given recordings of the killing to Britain, the U.S. and other Western countries.

President Trump has said that the North Korean nuclear threat is over. But a study being published today identifies 16 previously secret missile bases in the North that could bolster launches of conventional and nuclear warheads.

At the same time, U.S. sanctions against Pyongyang are collapsing. That gives Secretary of State Mike Pompeo less leverage. (It’s just one of many challenges he faces).

• “Nanoinfluencers” are the next frontier in corporate branding. They’ll typically say anything in exchange for free products or (small) commissions.

• Hollywood is in crisis as it faces mega-mergers, the fallout from #MeToo, and Big Tech’s march into entertainment, our reporter writes.

• Silicon Valley is undermining democracy, Yuval Noah Harari says. So why do tech chiefs love him?

• A U.S. trade commission will submit a report this week on the impact of the agreement to replace Nafta. That’s one of the headlines in “With Interest,” our new business and tech newsletter. Sign up here.

• U.S. stocks were down on Friday. Here’s a snapshot of global markets today.

Tips for a more fulfilling life.

• Patience is worth cultivating.

• Being in a funk isn’t always bad.

• Representative Dana Rohrabacher lost a bid for re-election in California, highlighting the Republican Party’s setbacks in a part of the state it once dominated.

• A covert Israeli mission apparently went awry in the Gaza Strip, killing at least seven Palestinians and setting off airstrikes and rocket fire.

• The police in Australia arrested a woman accused of spiking strawberries with needles.

• A commercial rocket that was launched in New Zealand may be the beginning of a new era in the space business.

• The Tennessee Titans upset the New England Patriots. Here are the highlights from Week 10 in the N.F.L.

• “Dr. Seuss’ The Grinch” earned about $66 million and the top spot at the domestic box office.

In “Becoming,” she talks about suffering a miscarriage, relying on IVF to conceive and the challenges of being the first African-American first lady.

• Speaking up on dementia

Sandra Day O’Connor, the retired Supreme Court justice, is among a growing group of public figures choosing to make their diagnoses public.

Teenagers in the country use more marijuana than youths anywhere else in the world. The government hopes legalization will change that.

• Hunting for medicine in China

Terminally ill patients in the country often have to use underground pharmacies or make drugs themselves using instructions they find online.

• Quotation of the day

“These Democrats didn’t get elected, by and large, to war with Trump. They got elected to try and get some positive things done on issues like health care and economic issues.”

• The Times, in other words

Here’s an image of today’s front page, and links to our Opinion content and crossword puzzles.

• What we’re listening to

Jennifer Jett, an editor in Hong Kong, recommends this from Metro in Britain: “An exhibit at the Imperial War Museum in London commemorating the 100th anniversary of the end of World War I, which was Sunday, features a painstaking recreation of what it may have sounded like when the guns fell silent at the 11th hour of the 11th day of the 11th month of 1918. (The Smithsonian explains how the sound engineers created the installation.)”

To prepare, the tiny nation not only imported a fleet of gleaming Maseratis, but also unveiled a six-lane boulevard near the Parliament House built via Chinese loans.

It is just one of Beijing’s many efforts to compete for global influence.

Some are white elephants, like the little-used $1 billion Hambantota Port in Sri Lanka.

Then there’s the world’s longest sea bridge — 34 miles linking Hong Kong with Macau and the mainland city of Zhuhai.

Perhaps China’s best-known construction oddities are within China: ghost cities — see the desert city of Ordos — and empty airports. The Changhai Airport at one point serviced one route.

“Call in two to three days to check if there’s a flight,” an airport official told Reuters in 2015. “The plane’s under maintenance.”

Your Morning Briefing is published weekdays and updated all morning. Browse past briefings here.

Sign up here to get it by email in the Australian, Asian, European or American morning. To receive an Evening Briefing on U.S. weeknights, sign up here.

Check out our full range of free newsletters here.