Young voters: We can march, shout and walk out, but we must vote

A network of youth organisations calls on students to leave class at 10am local time and head to polling stations. 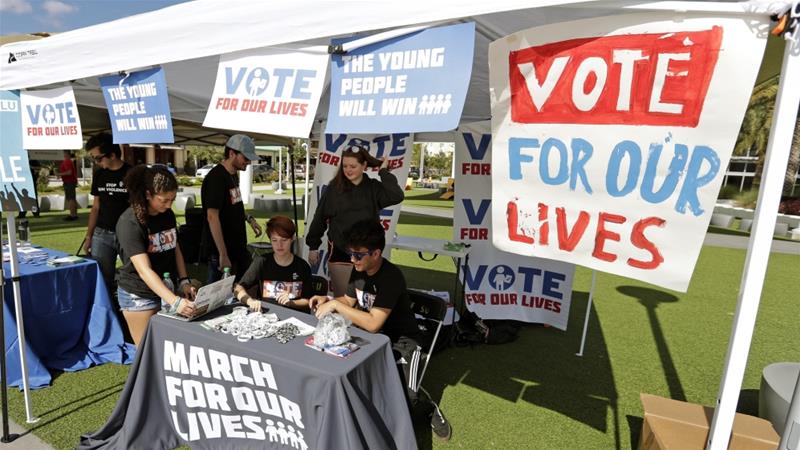 Students across the United States are walking out of their classrooms and heading to polling stations to cast their votes.

“We can march, we can shout, we can walk out – but the biggest thing we have to do is we have to vote,” organiser Katie Eder told Now This earlier this month.

Eder is part of the Future Coalition, a network of youth organisations, which issued the call to action, and the campaign has drawn support from celebrities including rapper Snoop Dogg.

“For all the young folks out there ur future will depend on this election (100 percent) the youth movement cannot be stopped !! Join the walkout. get out there n vote,” Snoop Dogg wrote.

Activists will follow up on the walkout, scheduled at 10am local time, by operating phone banks and creating text message chains calling on other youths to cast their votes.

For those who have recently turned 18 years old, the 2018 midterms will be their first opportunity to vote.

This includes a number of survivors of the Parkland, Florida, school shooting earlier this year in which a gunman killed 17 people, the majority of whom were students.

According to the US census bureau, younger people are less likely to vote than older citizens.

Data on the 2016 US presidential election showed that there was a 61.4 percent total turnout with a turnout among 18 to 29-year-olds of just 46.1 percent. By contrast, 70.9 percent of those 65-years-old and older cast their vote.

Activists have been trying to energise the youth vote in recent years in response to several school shootings, and the rising far right.

Youth groups have also been campaigning on issues such as universal healthcare and the cost of university education.