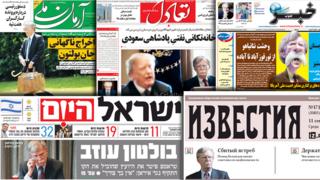 Media outlets in global hot-spots see the firing of hawkish US national security advisor John Bolton as a likely boost for Donald Trump’s talks with US foes in Afghanistan, North Korea and other sensitive areas.

But what do the media from these countries make of John Bolton’s legacy, and the way forward now?

State TV channel Rossiya 1 describes Mr Bolton as a “classic hawk of American politics” with a hard stance on Iran, Venezuela and Russia. “Bolton is known as the person who is ready to bomb any problem,” its correspondent says.

Russian state TV Channel One brands the outgoing national security adviser a “hawk of hawks”, over a screen caption saying “House of Cards”.

The channel says Mr Bolton presided over the cancellation of the US-Russia Intermediate-Range Nuclear Forces Treaty and “came to predict the end” of another arms control agreement – the Strategic Arms Reduction Treaty. Its correspondent calls Mr Bolton “the architect of this new America of Donald Trump’s – an America not bound by international agreements”.

Russia does not expect its ties with Washington to suddenly improve following Mr Bolton’s exit, RIA news agency cites Deputy Foreign Minister Sergei Ryabkov as saying. Such staff reshuffles in the United States have not led to a normalisation in relations in the past, he says.

Iranian newspapers are reporting the story prominently. Arman newspaper carries the headline “Chaos in the White House” while Sharq daily asks “Was Bolton sacrificed for Iran?”

One of President Hassan Rouhani’s advisers said the sacking points to a failure of Washington’s “maximum pressure strategy” against Iran.

“The marginalisation and subsequent elimination of Bolton is not an accident but a decisive sign of the failure of the US maximum pressure strategy in the face of the constructive resistance of Iran,” Hesameddin Ashena tweeted.

That’s echoed by commentator Noa Landau in the same paper: “The sacking of US National Security Adviser John Bolton, considered especially hawkish in the Iranian issue and the last obstacle before Trump’s talks with the Iranian president, is a serious blow to Netanyahu’s policy on the Iranian nuclear issue – it is a nightmare Netanyahu feared in recent weeks.”

For Herb Keinon in The Jerusalem Post, Mr Bolton’s dismissal means Mr Netanyahu is losing a strong advocate in Trump’s inner circle. But he warns that the implications go beyond the Iran issue.

“It is no coincidence that the whole push to get US recognition of the Golan Heights began with a visit to Israel by Bolton in January, when Netanyahu made his first public appeal to the US for recognition of Israel’s sovereignty over the strategic plateau. Bolton was also key in getting Trump to back away from promises to withdraw US troops from Syria, and has long been very sceptical of the reality of a two-state solution for solving the Palestinian issue.”

In North Korea, state media have so far not been observed to cover the developments. But the North is likely to welcome Mr Bolton’s departure, given that he has long been a target of its ire.

In the past, the North’s media have fiercely attacked him as “a security-destroying adviser”, a “warmonger,” a “structurally defective guy” and a “human defect” that “deserves an earlier vanishing.”

But the view today from South Korea’s state news agency Yonhap is that Mr Bolton’s departure “may bring flexibility to the upcoming nuclear talks with North Korea but could undercut efforts to achieve the regime’s complete denuclearisation.”

Mr Bolton’s removal comes as the United States and the North are expected to resume their nuclear talks later this month amid tension caused by military exercises in the South.

Venezuelan pro-government newspaper Ultimas Notocias quotes Vice-President for Economy Tareck El Aissami as saying on Twitter that Bolton was the one who “lied the most about our people and caused them most damage”.

“Historical truth defeated the demons of war,” the politician tweeted.

Ultimas Notocias also notes that Secretary of State Mike Pompeo has said that US foreign policy towards Venezuela “will not change, thus economic, financial and commercial blockades against the country will remain”.

Venezuela’s news website Tal Cual believes John Bolton “was a key element in the US government’s pressure campaign against the Nicolas Maduro’s regime. His critical role was that he was considered by many officials as a spokesman for the Venezuelan opposition.”

Turkey’s nationalist Sozcu newspaper highlights the tension that has grown between Ankara and Washington over the purchase of Russian S-400 air defence missiles – and puts the blame on John Bolton.

“One of the most important subjects that Trump disagreed with Bolton over was in relation to Turkey. And one of the names that led the camp that defended imposing harsh sanctions against Turkey as part of the Countering America’s Adversaries Through Sanctions Act (CAATSA) was John Bolton, along with Secretary of State Mike Pompeo,” it notes.

In Lebanon, Samih Saab of the Al-Nahar newspaper declares: “On the road between Washington and Tehran, John Bolton fell.”

He says Mr Bolton “was the one who convinced Trump to re-impose sanctions and put the ‘utmost pressure’ on Iran”.

Iran is suffering from an economic war, but the regime has not fallen, he says. “And this has presented Trump with difficult options”.