With Democratic Wins, Charter Schools Face a Backlash in N.Y. and Other States

Over the last decade, the charter school movement gained a significant foothold in New York, demonstrating along the way that it could build fruitful alliances with Gov. Andrew M. Cuomo and other prominent Democrats. The movement hoped to set a national example — if charter schools could make it in a deep blue state like New York, they could make it anywhere.

But the election on Tuesday strongly suggested that the golden era of charter schools is over in New York. The insurgent Democrats who were at the forefront of the party’s successful effort to take over the State Senate have repeatedly expressed hostility to the movement.

John Liu, a newly elected Democratic state senator from Queens, has said New York City should “get rid of” large charter school networks. Robert Jackson, a Democrat who will represent a Manhattan district in the State Senate, promised during his campaign to support charter schools only if they have unionized teachers.

And another incoming Democratic state senator, Julia Salazar of Brooklyn, recently broadcast a simple message about charter schools: “I’m not interested in privatizing our public schools.”

No one is saying that existing charter schools will have to close. And in fact, New York City, which is the nation’s largest school system and home to the vast majority of the state’s charter schools, has many that are excelling.

Over 100,000 students in hundreds of the city’s charter schools are doing well on state tests, and tens of thousands of children are on waiting lists for spots. New York State has been mostly spared the scandals that have plagued states with weaker regulations.

But it seems highly likely that a New York Legislature entirely under Democratic control will restrict the number of new charter schools that can open, and tighten regulations on existing ones.

The defeat is magnified because Mr. Cuomo, a shrewd observer of national political trends with an eye toward a potential White House bid, recently softened his support for charter schools. Mayor Bill de Blasio is a longtime charter opponent with his own national aspirations.

And New York is not the only state where the charter school movement is facing fierce headwinds because of the election.

Gov. Scott Walker of Wisconsin, an enemy of public sector unions, was unseated by a Democrat, Tony Evers, a former teacher who ran on a promise to boost funding to traditional public schools.

In neighboring Illinois, J.B. Pritzker, a Democrat who promised to curb charter school growth, beat the incumbent Republican, Gov. Bruce Rauner, a supporter of charter schools. And in Michigan, a Democrat, Gretchen Whitmer, promised to “put an end to the DeVos agenda.”

Ms. Whitmer won her race for governor decisively against the state’s Republican attorney general, Bill Schuette, who is an ally of Betsy DeVos, the education secretary under President Trump. Ms. DeVos has been an outspoken proponent of charter schools in her home state of Michigan and nationally. 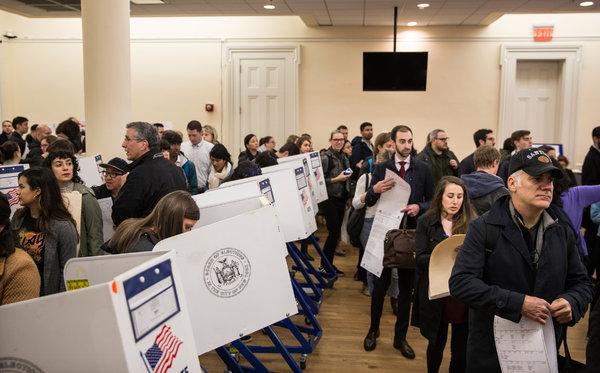 Voters on Tuesday gave Democrats control of the New York State Legislature. It seems likely that the body will restrict the number of new charter schools that can open.

Now charter school supporters are wrestling with the unpleasant reality that a supposedly bipartisan movement, intended to rescue students from failing public schools, has been effectively linked to Wall Street, Mr. Trump and Ms. DeVos by charter school opponents.

Derrell Bradford, the executive vice president of a national group that backs charters, 50CAN, acknowledged that the election results raised new challenges. He said the situation was especially fraught because Mr. Trump has championed charter schools, making the issue toxic for some Democrats.

“I find it frustrating that the president’s support is often used as the reason for people to abandon support of charters and low-income families,” Mr. Bradford said.

Where insurgent national Democrats support charter schools, they do so carefully: Representative Jared Polis, the Colorado Democrat whom voters sent to the governor’s mansion on Tuesday, founded two charter schools. But he has made sure to criticize Ms. DeVos’s vocal brand of school choice advocacy.

Tuesday’s results were compounded by other recent blows for charters in liberal states.

In 2016, Massachusetts voters rejected a referendum that would have expanded the state’s high-performing charter schools. Though backers poured $20 million into the race, it was no match for Senator Elizabeth Warren and Senator Bernie Sanders, progressive stars who opposed the initiative.

Philanthropists tried again in California over the summer, when they spent $23 million to bolster the former Los Angeles mayor, Antonio Villaraigosa, in the primary for governor. Mr. Villaraigosa, a Democrat, was easily beat by Gavin Newsom, the Democratic lieutenant governor, who has been vague about the role of charters as he seeks to make California an epicenter of opposition to the Trump administration.

Some advocates find a sliver of hope in the fact that even the most liberal Democrats acknowledge that charter schools are here to stay. Many opponents want to slow growth, not destroy charters.

“No matter how hostile some of the cities get to charters, the charters have endured,” said Jeanne Allen, the chief executive of the Center for Education Reform, a national school choice advocacy group.

In New York, the insurgent Democratic candidates’ criticism of charters was somewhat less central to their campaigns than their support for traditional public schools. And though most of those Democrats said they would reject any plan to expand charter schools, they are aware that charters are popular among some families in their own districts.

“You don’t want to alienate anybody,” said Alessandra Biaggi, who in the Democratic primary unseated one of the charter lobby’s most reliable allies, State Senator Jeffrey D. Klein, in a Bronx district. “I understand why charter schools exist, I understand why they have come to the Bronx, I really get it. But we’ve got to focus on improving our public schools.”

But even the best-case scenario — widespread political ambivalence, rather than animus, toward charters — would have significant consequences for charter school supporters in New York.

The Legislature may not even bother to take up charter advocates’ most pressing need: lifting the cap on the number of charter schools that can open statewide. Fewer than 10 new charter schools can open in New York City until the law is changed in Albany.

That means the city’s largest charter networks, including the widely known Success Academy, will be stymied in their ambitious goal of expanding enough to become parallel districts within the school system.

But it is the smaller, more experimental charter schools that may have the most to lose.

“A new generation of schools will be thwarted,” said Steven Wilson, the founder of Ascend, a small network of Brooklyn charter schools.

And charters will now be partially regulated by the movement’s political foes. State Senate Democrats, with the lobbying support of teachers’ unions, are likely to push laws requiring charter schools to enroll a certain number of students with disabilities or students learning English. Previous proposals indicate that those politicians may force charters to divulge their finances, and could make it harder for charters to operate in public school buildings.

Charter school advocates in Democratic states said defeat has made their political mission clear: Convince the holdouts of their liberal bona fides.

“What people don’t understand is that our previous politics obscured just how progressive the vast majority of people in the charter movement actually are,” James Merriman, C.E.O. of the New York City Charter School Center, said.

Days after the 2016 election, Eva Moskowitz, the C.E.O. of Success Academy, interviewed with Mr. Trump for the role of education secretary. When she announced that she would not take the job, Ms. Moskowitz praised the president on the steps of City Hall.

The next day, Ms. Moskowitz hugged Ivanka Trump, the president’s daughter, when she visited a Success Academy school. A few months later, Ms. Moskowitz welcomed the House speaker, Paul D. Ryan of Wisconsin, to the same school during the fight to repeal the Affordable Care Act, which Mr. Ryan helped lead.

Students peered out the windows of the Harlem school as angry protesters waited outside, playing bongos and waving signs.

After a backlash from her staff, Ms. Moskowitz said she “should have been more outspoken” against Mr. Trump.

The situation got worse when one of Ms. Moskowitz’s most prolific donors, the hedge fund billionaire Daniel S. Loeb, said last summer that a black state senator who has been skeptical of charter schools had done more damage to black people than the Ku Klux Klan.

His comment was met with fury from black supporters of charter schools, some of the movement’s most indispensable allies.

On Tuesday, that senator, Andrea Stewart-Cousins, became the next leader of the New York State Senate.