For as long as Bill de Blasio has been mayor, his relationship with Albany has been somewhere between nonexistent and disastrous.

Time and again, the mayor has been stymied in nearly every attempt to move the city’s agenda through the State Legislature, with the Republican-led Senate — and, at times, Gov. Andrew M. Cuomo — in the way.

But with Democrats finally taking control of the State Senate in Tuesday’s election, Mr. de Blasio saw real opportunity, and in his exuberance, his mayoral cup overflowed with metaphor. “It’s a whole new ballgame,” he said, adding, “the center of gravity has shifted.”

The mayor, a second-term Democrat, was quick to announce the measures that he would like the Legislature, with both houses now in the hands of his party, to take up promptly in the new year.

His list included rent law reforms and other steps to protect or promote affordable housing; new sources of financing for the city’s subways and buses; education financing and extended mayoral control of schools; and changes to election laws that would make voting easier and remake the Board of Elections.

[Read more about what the Democrats, finally in control in Albany, might do with their newfound power.]

Still, even an all-Democratic Albany could present challenges to Mr. de Blasio, who has shown in the past that he is capable of overconfidence that leaves him vulnerable to overreaching and stumbling.

Central to the mayor’s success will be his relationship with Mr. Cuomo, who was re-elected to a third term on Tuesday and remains the most powerful force in the state capital. The governor’s relationship with the mayor during their respective tenures has ranged from mildly unpleasant to downright nauseating.

On Wednesday, the mayor pooh-poohed any animus between the men, again insisting that the new Democratic power dynamic would help ease the tension, mentioning Carl E. Heastie, the speaker of the State Assembly, and Andrea Stewart-Cousins, due to lead the State Senate.

“The difference now is you’ve got, in the two leaders of the Legislature, two people who are devoted to making real change and who work well together,” the mayor said. “From my point of view, we’re going to be able to have a kind of dialogue we never had before.”

Then, perhaps wisely, he added a note of caution, saying, “Of course, these are still complex issues and everything will take time.” 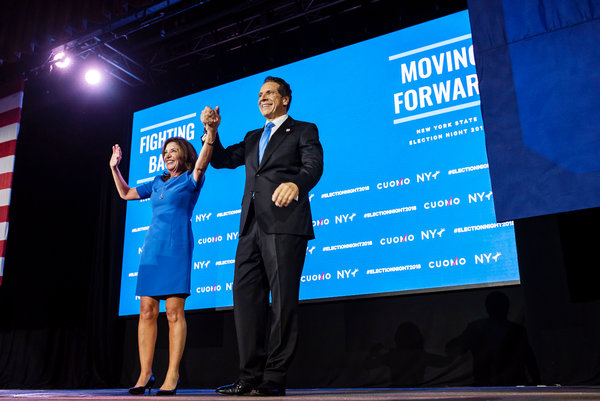 In an interview with The New York Times, Mr. Cuomo reeled off a number of measures he plans to support during the coming legislative session, which starts in January, but most seemed focused on state issues.

There were bound to be conflicts: Mr. de Blasio has repeatedly called for a new tax on high earners to fund various programs, and called for it again on Wednesday; Mr. Cuomo, more fiscally conservative, has opposed it.

In campaigning, too, Mr. Cuomo had some Democratic candidates sign onto a nine-point plan that included making the “demand” that New York City “pay its fair share for” public transit programs.

Then, too, there is the lingering issue of Mr. Cuomo’s primary challenger, Cynthia Nixon, who is friends with Mr. de Blasio. The mayor didn’t officially take sides in the primary, but the legislative session could be the first test of whether Mr. Cuomo exercises his gold-medal skills in holding a grudge.

Compromise, of course, is usually easier when members are of similar political persuasions, and if you peer closely, you could discern signs on Wednesday of a détenteon a congestion pricing proposal for the city, an idea that Mr. Cuomo supports. Mr. de Blasio has been softening his public statements on congestion pricing in recent weeks, and on Wednesday he again said that it could be part a mixture of financing sources for the Metropolitan Transportation Authority.

Mr. de Blasio also said that the new dynamic in Albany could improve relations with Mr. Cuomo. “We’ve both said publicly and privately we want to try, in his new term, to do better at finding common ground, and I’m going to work on that consistently.”

The State Assembly has always been the friendliest terrain for Mr. de Blasio, with dozens of city-based Democrats, and will likely remain that way. Mr. Heastie has usually been viewed as his closest ally.

But the State Senate was a snake pit for the mayor, largely stemming from an attempt in 2014 by Mr. de Blasio to defeat Senate Republicans that backfired badly. Republicans won seats, and his aggressive fund-raising tactics led to state and federal investigations that became a major distraction through part of his first term.

Senate Republicans subsequently tormented him whenever possible, blocking his initiatives or letting him turn slowly before they agreed to extend mayoral control of city schools (for much shorter periods than he desired).

On Wednesday, however, it was Senate Republicans who were hurting, looking at a vastly diminished caucus and the possibility of a long time in the wilderness. Senator Patrick Gallivan, one of only 23 Republicans who won on Tuesday, worried that the new Democratic Albany would look like the last version, in 2009-10, when taxes went up.

Mr. Gallivan, who represents the Buffalo area, said he also worried that Mr. de Blasio and his fellow downstaters — including and most notably Mr. Cuomo, Mr. Heastie and Ms. Stewart-Cousins — would forget about upstate.

“I don’t think one-party rule anywhere is good for the state,” he said.