Will Labor Day weekend in US mean another coronavirus spike?

Public health officials in US say long weekend a ‘critical point’ in fight against the novel coronavirus. 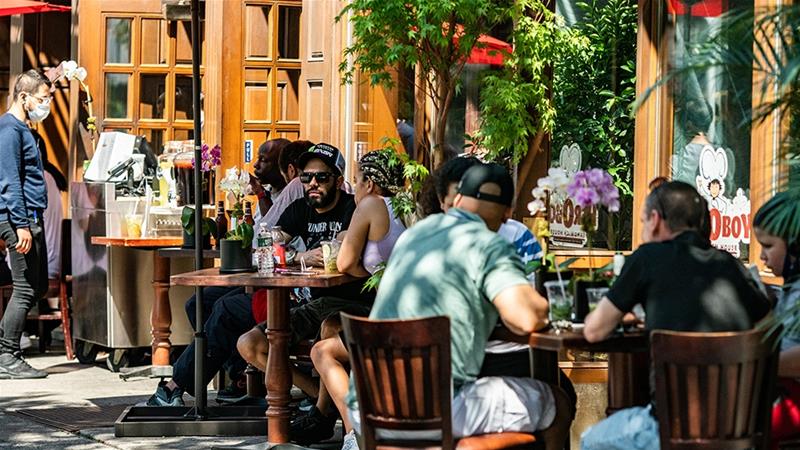 As people across the United States head into the Labor Day long weekend on Friday, public health officials are warning not to make the same mistakes they did on previous holidays.

The fear is that backyard parties, crowded bars and other gatherings could lead to a surge in coronavirus cases across the country, which has reported almost 6.2 million cases of the virus and about 187,000 related deaths since the pandemic began.

“I look upon the Labor Day weekend really as a critical point,” said Dr Anthony Fauci, the US government’s top infectious disease expert.

“Are we going to go in the right direction and continue the momentum downward, or are we going to have to step back a bit as we start another surge?”

The warnings came as a widely cited model by the Institute for Health Metrics and Evaluation at the University of Washington projected a worsening outbreak in the US that will peak in early December at about 2,900 deaths a day, up from about 860 a day now, unless government officials take action.

Over the summer, the US saw a rise in infections, deaths and hospitalisations, primarily in the South and West, that was blamed in part on people behaving heedlessly over the Memorial Day and July Fourth holidays in May and July, respectively.

The landscape has improved in recent weeks, with the numbers headed in the right direction in hard-hit states like Florida, Arizona and Texas.

But there are certain risk factors that could combine with Labor Day: Children are going back to school, university campuses are seeing soaring case counts, college football is starting, more businesses are open, and flu season is around the corner.

Trump said at a White House briefing that “we need everybody to be careful” and to “apply common sense” in their interactions with one another.

People in the US have been cooped up for months and many appeared more than ready to venture out and socialise – though with some precautions.

In Cicero, Indiana, 40-year-old Matt McInnis planned to continue with tradition by getting together with about 15 neighbourhood friends for a barbecue.

“With the picnic being outdoors, we feel that we can space enough, and with the fresh air that we are going to be safe with it being outdoors and in the wide open,” McInnis said.

In New York City, once of the epicentre of the coronavirus outbreak in the US, Jennifer Bolstad of Brooklyn picked up the keys to a rented minivan with plans to drive with her two children to Maryland this weekend to visit family she has not seen in a year.

“I monitored the quarantine list pathologically, and they are finally a place I can visit,” she said, referring to the list of states that New York has advised are safe to travel to.

“I think a lot of people are going stir-crazy and are going somewhere this weekend and possibly not be as cautious as they should about not bringing their germs back with them.”

Governors throughout the Northeast discouraged people from travelling out of state this weekend. Visitors from 33 states and territories must quarantine for 14 days after arriving in New Jersey, New York or Connecticut.

Dr Anthony Fauci, director of the National Institute of Allergy and Infectious Diseases

The IHME model Friday predicted that worsening outbreaks in the Northern Hemisphere will lead to 1.9 million more COVID-19 deaths in the remaining months of 2020 unless governments take action.

Mask mandates and social distancing could save hundreds of thousands of lives, but there is “a tremendous amount of COVID fatigue” among the world’s government leaders because of economic downturns, said IHME’s Dr Christopher Murray.

Dr Albert Ko, a Yale University epidemiologist, said he is concerned about students heading back to school across the nation next week after coming back from holiday travel and a weekend of social gatherings.

“Any transmission events that happen here could be amplified unless we’re careful about it,” Ko said. “Whether it’s going to be a perfect storm, l don’t think so. People are aware of the risk, and people have been socially distancing. But this is certainly a concern.”