LOS ANGELES — Ana Paredes paced back and forth in anxious anticipation, her eyes on the escalator disgorging passengers into the baggage claim area. When the little girl emerged, Ms. Paredes rushed forward to clutch and caress her. But 10-year-old Melissa, the daughter she had not seen for seven years, at first embraced her only halfheartedly.

Before boarding the flight to Los Angeles, the girl had fretted on the phone about whether she would find her mother at the airport. “Will I recognize you?” she asked.

Her arrival on April 2 marked the end of a 2,500-mile journey that began in Guatemala in February, progressed over land through Mexico and then ended in a hazardous raft trip across the Rio Grande into Texas. She spent several weeks in a government-contracted group home before being allowed to join her mother and two older siblings in California.

When Ms. Paredes left Melissa in Guatemala in 2014, her daughter had been a cheerful toddler, just starting to learn colors and talk in complete sentences. Now, she walked off the plane with her thick black hair gathered in a bun, her air mature and aloof, carrying her own luggage. 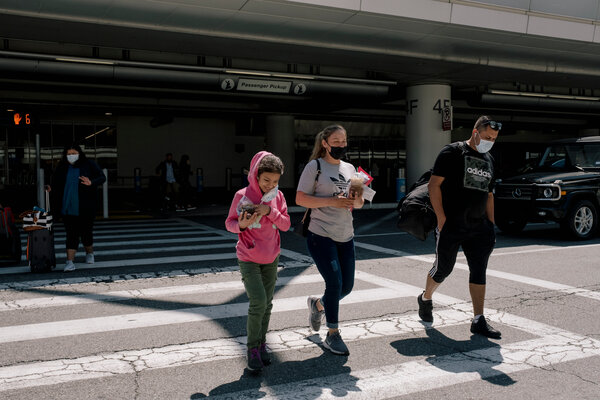 Over the past six months, nearly 50,000 migrant children like Melissa have crossed the southwestern border on their own, an extraordinary new wave of immigration that has left authorities scrambling to open shelters and locate family members in the United States.

Unlike the migrant children separated from their families at the border under the Trump administration, many of the children arriving now were left behind years ago in Honduras, Guatemala and El Salvador by parents who traveled north to find work. Their parents were encouraged to send for them by President Biden’s more welcoming approach to immigration.

The arrivals are creating joyous reunions across the country but also posing challenges for parents like Ms. Paredes, who paid thousands of dollars to smugglers to ferry her child to the United States and now must help her daughter ease into a new, unfamiliar life.

“I did it because I had to,” Ms. Paredes, 36, said of her decision years ago to leave her children behind in Guatemala. She had hoped that they and the rest of her family of rural sharecroppers would benefit from the money she was able to send home.

“Growing up, we walked barefoot; we were so poor,” she said. “I wanted better for my children.”

A new life in California

Ms. Paredes, a single mother, had left behind not only Melissa, who was then 3, but her two older children, ages 9 and 6. She told them she would return in five years.

Joining an older brother in Oxnard, Calif., she found work packing cosmetics for a company owned by the Kardashian family by day and washing dishes at a restaurant by night. She lived in a converted garage.

“From the first month, I was sending as much money as possible to my mother and children,” said Ms. Paredes, who shared about $600 a month.

Over the years, she helped her mother add a kitchen to her hut, buy appliances and cover the cost of doctors’ visits and medicine to treat her heart and liver ailments. For her children, the money she sent went to clothes, toys and education-related expenses. She bought a modest house a block away from her parents, hoping to live there one day with her family.

“I thought Melissa was still too young to make the trip,” Ms. Paredes said.

To ensure she had time for her children, she decided to work one job, in the berry fields, starting and ending her days early.

Back in Guatemala, Ms. Paredes’s mother’s health deteriorated; when she died months later, Melissa was forced to move in with an uncle in another town. He was “really strict,” Melissa said.

After that, the little girl refused to take calls from her mother.

Early this year, with a new president in the White House and news that families with young children were not being turned away at the border, Ms. Paredes’s brother decided to bring his daughter, son-in-law and 9-month-old granddaughter to Oxnard.

Melissa could accompany them, they said. Ms. Paredes agreed to pay $3,400 to a smuggler.

On Feb. 14, the four set out from Guatemala with other migrants heading north. Women and children squeezed into the back seat of the truck. Men traveled in the cargo bed.

“We went hungry,” Melissa said. The baby, Andrea Samantha, cried because her mother’s milk dried up.

In the filthy stash houses where they spent each night, everyone slept on the ground. “There were so many ants,” Melissa said.

About 10 days into the trip, they reached Mexico’s border with the United States, family members said, and were locked up with about 100 other migrants awaiting orders to cross the Rio Grande.

Many days passed. The baby was fussy and famished, Ms. Paredes’s sister-in-law, Marlin Paredes, said. “I cried. They wouldn’t let us set foot out of that place, and I felt like running away.”

By the time it was their turn to go, Melissa said, she had replayed over and over in her head what she was supposed to do.

Once on U.S. soil, she was to distance herself from her relatives and surrender to Border Patrol agents. She was to say, “I came alone — I don’t know any of the migrants.” If asked whether she had family in the United States, she was to share her mother’s name, the city where she lived and her cellphone number, which she had memorized.

The separation tactic, she was told, would help assure that she would be allowed to remain, even if the adults in the party, as often happens, were expelled.

It was pitch black when Melissa, her relatives and another eight migrants followed a guide, only his flashlight illuminating the path to the river’s edge.

As they boarded an inflatable raft, the guide instructed the migrants to kneel, four to a row, with arms against their bodies.

“We had to keep still like this,” Melissa said, bending down to demonstrate. “My shoes got all wet.”

Not long after they disembarked on the other side, the Border Patrol arrived.

Within hours, Melissa boarded a van with several teenagers. They were dropped off at a massive tent structure in Donna, Texas, where unaccompanied minors were being processed.

Melissa remembered her mother’s phone number, and an agent called Ms. Paredes in Oxnard to inform her that her child was safe. It was March 4.

Much of the backlog has been cleared at Donna, but at the time, more than 1,000 young people were crammed into pods partitioned with clear plastic sheets. Some slept on blue metal benches because there was not enough room on the floor. Melissa said she shared a mattress on the ground with two other girls.

To keep warm, everyone got a Mylar blanket, a wafer-thin metallic sheet that fit in the palm of Melissa’s hand when she folded it.

During several days at the center, she saw the sky twice — when the girls had to vacate their pod for cleaning. “When they let us outside, they made us walk in circles on fake grass,” Melissa said.

The food was not bad, she said, but it was not enough. At snack time, she sometimes grabbed an extra packet of Oreo cookies when no one was looking.

After several days, she was sent to stay with about five other children in a foster home in Corpus Christi, Texas.

There, Melissa shared a room with a 13-year-old from El Salvador and a 10-year-old from Honduras, with whom she became fast friends, she said. The woman running the home, who spoke Spanish, took them to a store, where Melissa picked out a pink hoodie with a rainbow. They visited a playground. One Sunday, they went to church.

Back in Oxnard, Ms. Paredes prepared the paperwork required to regain custody of her child.

On the phone, Melissa told her mother that she was well, though bored with the Disney princess movies that kept playing on the TV.

But when her daughter underwent a mental health assessment, Ms. Paredes was devastated to learn that Melissa had said she sometimes wished she could die.

Ms. Paredes joined a Zoom session offered by a nonprofit group for parents and others preparing to receive young migrants, hoping for advice on how to cope with lingering trauma.

In late March, Ms. Paredes was informed that she had satisfied all the requirements, including a background check. All she had to do was pay $1,400 for a one-way airline ticket for Melissa and an escort to accompany her.

On a call, Melissa asked her mother whether she would recognize her. “How old was I when you left? I can’t remember you.”

“You will recognize me,” Ms. Paredes told her daughter. “We will make up for lost time.”

A homecoming with balloons

In Oxnard, Melissa was warmly greeted by her brother and sister, as well as her cousin, who had made the journey from Guatemala with her.

Colorful balloons and a poster scrawled with a message — “Welcome, Little Sis. We Love You Very Much” — covered one wall.

Melissa had something to show them as well: She had sneaked out a memento from her stay at the Border Patrol camp: not just one, but two Mylar blankets, the shiny silver sheets she had used to cover herself.

Melissa shared a double bed with her mother. One night, Ms. Paredes mustered the courage to ask her daughter why she had stopped talking to her after her older siblings left Guatemala.

“I never meant to abandon you,” Ms. Paredes said.

Like other unaccompanied minors entering illegally, Melissa has been placed in removal proceedings. Her family hopes she will win a reprieve.

School officials said it was best to wait until the fall for Melissa to start classes, but Ms. Paredes signed her up for a soccer league so she could begin making friends.

At a recent practice, she kept a distance from the other players when they lined up for drills, fiddling nervously with her hands. When it was over, Melissa walked to the sideline, where her mother was sitting. Ms. Paredes pulled her daughter onto her lap, gave her a tight embrace and pressed her lips on her cheek.

After arriving home from the fields, Ms. Paredes changed and dashed out to pick up pizza, barbecue chicken and a tres leches cake, a sponge cake soaked in three kinds of milk and topped with glazed strawberries.

Soon, family and friends began pouring into the apartment.

But all the attention embarrassed and overwhelmed Melissa.

“This is her first birthday party,” her mother explained in private.

Ms. Paredes had to push her to stand in front of the cake as the group serenaded her in Spanish, and then broke into “Happy Birthday.”

She blew out all 11 candles on her first try, smiling.