An Aug. 23 special election to replace a Democrat, Antonio Delgado, could help answer one of the biggest questions of the midterms. 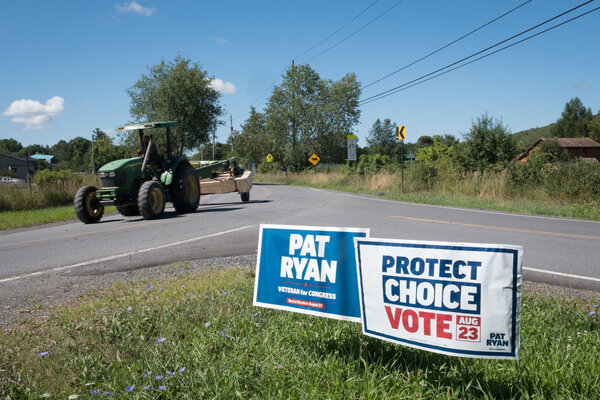 “Choice Is on the Ballot,” one sign says, the white lettering cast over a background of pink and blue, and a smaller line beneath it for the Democratic candidate, Pat Ryan.

The Aug. 23 contest for the seesaw district, which routinely wavers between Democratic and Republican control, had initially been cast as a potential bellwether of President Biden’s stature among swing voters.

But the race — among the first House special elections in a swing district since the Supreme Court overturned Roe v. Wade — has quickly morphed into a closely watched test case of how important abortion rights may be in a tossup general election.

Mr. Ryan, a combat veteran who serves as executive of Ulster County, is in favor of protecting abortion access nationwide. Marc Molinaro, the Republican executive of Dutchess County, is not.

Like many other Democratic congressional candidates around the country, Mr. Ryan is trying to make the threat to abortion rights a central issue in the campaign. He cites the rollbacks of reproductive rights, voting rights and access to health care as urgent indicators.

“It is an existential moment for our democracy,” he said.

Mr. Molinaro has similarly adopted a Republican Party strategy — avoid talking about abortion whenever possible — that is beginning to take hold, especially after voters in Kansas, a Republican state, overwhelmingly rejected a referendum that would have removed abortion rights from the state’s constitution.

Polling shows that 65 percent of Americans believe that abortion should be legal in most or all cases — a number that has grown in the past decade. But whether that belief is enough to persuade voters to stick with Democrats despite high gas prices and inflation remains to be seen — and is a question that reflects the party’s larger struggle to energize a socially and economically diverse base in the upcoming midterms.

The 19th Congressional District in New York — last represented by Antonio Delgado, a Democrat who gave up his seat this spring to serve as lieutenant governor — is among the nation’s dwindling number of true swing districts. Combining both the liberal cities of Kingston and Hudson with more conservative rural areas of Greene and Delaware Counties, the district went for President Barack Obama in 2012 and Donald J. Trump in 2016 before returning narrowly to the Democrats in 2020.

When Mr. Delgado won in 2018 and again in 2020, some saw the impact of well-heeled city-dwellers, many of whom vote Democrat, who had begun to migrate into the Hudson Valley. That trend has only increased during the pandemic, revitalizing small towns but also exacerbating the area’s housing crisis and contributing to local tensions.

Mr. Molinaro has tried to tailor his campaign to middle- and working-class concerns, speaking often about crime and economic woes, a struggle he says he knows first hand as a child growing up on food stamps. He blames Democratic policies in Albany and Washington for the inflation and high consumer prices that he says are hurting upstate New Yorkers, urging voters to send a message to “limousine liberals.”

On social issues, Mr. Molinaro mostly toes the party line, saying he opposes bans on assault rifles and is personally opposed to abortion. But where he once said that he considered the constitutional right to abortion to be settled law, he now says that he believes the decision belongs with states and he would vote against a federal law ensuring abortion access nationwide.

More Coverage of the 2022 Midterm Elections

The position has put him on the defensive, particularly given the weight that Mr. Ryan has given the issue in campaign literature and advertising. Indeed, Mr. Molinaro rarely speaks about it except when pressed, as in a recent debate, when he invoked rare late-term abortions as a reason to restrict abortion rights.

“Like most people of this district, I just think there ought to be some thoughtful limitations,” he said. Later, he prodded Mr. Ryan: “Are you OK, Pat, with no limitations? None? You think that even to the second before delivery, you are OK with abortion?”

Mr. Ryan frames his campaign as an outgrowth of the call to service that led him to the military, speaking often about responsibility to community and the promise that government should be a force for good.

Like Mr. Molinaro, he agrees that the economy is not working for many in the working class, but blames large corporations for taking more than their share. Calling out entrenched politicians on both sides of the aisle, he envisions a “people-centered” economy bolstered by investments in child care, housing and infrastructure.