Why US mid-term elections matter 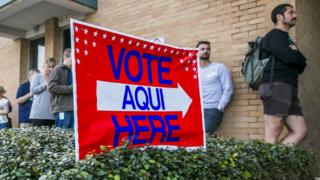 The looming US mid-term elections will shape American politics for the next two years and beyond.

President Donald Trump himself is not up for re-election, so fewer voters are expected to turn out.

But his ability to govern in the final two years of his first term will hinge upon the 6 November outcome.

Who is on the ballot?

All 435 members of the House of Representatives, 35 seats in the 100-member Senate and 36 out of 50 state governors, along with many state and local offices.

Republicans currently hold sway in both chambers of Congress and the White House. But there is giddy talk among Democrats of a “blue wave”.

With dozens of Republican lawmakers retiring this year, the minority party has a decent chance of taking over the House. Democrats need 20 or so seats to control the lower chamber.

But in the Senate, Republicans are tipped to retain their majority and perhaps even consolidate it.

That’s because out of the upper chamber seats up for grabs this autumn, 26 are held by Democrats (including two independents who vote with them) and just nine by Republicans.

Democrats may need to win all those races and pick up two Republican seats, leaving little margin for error.

Ten of the Democratic seats are in states carried by Trump in 2016 – and five of those he won by double digits.

Reasons for Democrats to be cheerful

The president’s party has lost an average of 32 seats in the House and two in the Senate in every mid-term election since the American Civil War.

President Trump is also historically unpopular, according to opinion polls.

As an energised liberal base clamours to give ‘Trumpism’ a bloody nose, Democratic challengers are out-fundraising and out-polling a host of Republican incumbents.

There’s a lot of new talent. Anecdotal evidence suggests more women are running for office than ever before, chiefly on the left, and in some races all the Democratic candidates are under 30.

Reasons for Republicans to be cheerful

The mid-term electorate is usually whiter, older and more conservative.

Yes, Trump’s approval rating is low, but the Democratic party has no obvious standard-bearer and is widely viewed as rudderless since Hillary Clinton’s shock defeat in 2016.

Above all, the US economy is roaring like a fighter jet engine at maximum torque, with unemployment rates at rock bottom, consumer confidence high and wages actually rising.

What are the top hot-button issues?

Expect to hear a lot about how this election is a referendum on Trump.

This summer’s primaries – when the party faithful anoint their candidates for November’s election – will be a tug-of-war on the right between establishment and anti-establishment conservatives – and on the left, between populist progressives calling for Trump’s impeachment and pragmatic centrists.

Immigration remains a cultural touchstone that both main parties hope will play to their advantage.

Democrats believe the president’s hardline rhetoric on the topic will help them entice younger voters, suburban moderates and minorities.

Republicans are counting on Trump’s tough posture to turn out conservatives who think Democrats care more about illegal immigrants than US citizens.

The gun control movement launched in the aftermath of February’s high school shooting in Parkland, Florida, is also mobilising for the election.

Meanwhile, a recent Gallup poll found the top concern for US voters is healthcare.

Despite passing various measures to weaken the Affordable Care Act, Republicans have been unable to kill off Obamacare.

Voters tend to punish the party in power for rising medical insurance costs, which under Trump are continuing to hit Americans in the pocket.

What will mid-terms mean for Trump?

If Republicans lose control of either chamber of Congress, the president’s domestic agenda will be largely dead on arrival at Capitol Hill.

If Democrats win the House, they get to decide which bills come to the floor and they’ll control the committee chairmanships.

That will entail aggressive oversight investigations of the president’s administration, including alleged Russia collusion, Trump’s business dealings and sexual assault allegations against him.

But if Republicans hold on to the Senate, they will continue to approve Trump’s cabinet nominees and appoint conservative judges to US courtrooms.

If Democrats do do well in the mid-terms, it could actually work in Trump’s favour.

He will be able to pin blame on them for congressional gridlock, and there’s a risk they could overplay their hand.

What about governors’ races?

Governors wield considerable influence over politics in their state capitols – and the lives of their constituents.

Republicans currently control 33 out of 50 gubernatorial mansions and two-thirds of 99 state legislature chambers.

But of the 36 state governorships on the ballot this year, 23 are being defended by Republican incumbents, tantalising targets for Democrats.

Among the gubernatorial prizes are the presidential swing states of Ohio, Michigan, Florida and Pennsylvania.

As Trump runs for re-election in 2020, governors will play a crucial role in mobilising donors, volunteers and activists.

Which recent mid-terms were game-changers?

In 1994 the Republican party took control of the House and Senate, setting the stage for six years of battles with Democratic President Bill Clinton.

The Democrats retook both chambers in 2006, enabling President Barack Obama to accomplish chunks of his agenda when he won office two years later.

Republicans won back the House in 2010, curtailing Obama’s ability to govern.

In 2014, Republicans regained control of the Senate, and boosted their House majority to its largest since 1929.