Who Won That Arizona Senate Race? What Day Is It?

PHOENIX — At first, the Republican looked like she could win Arizona’s Senate race by a razor-thin margin. Then the Green Party emerged as a potential spoiler, even though its candidate had dropped out of the race. Now the Democrat has taken the lead.

Confused yet? The battle for the seat being vacated by Sen. Jeff Flake, the Republican ridiculed time and again by President Trump, is just getting started. Arizona’s election officials say it could take days for a winner to emerge as they steadily count hundreds of thousands of ballots after a surge in turnout around the state.

Mr. Trump is weighing in, claiming without offering proof that corruption is tainting the race. The chairman of the Arizona Republican Party is accusing the top election official in Phoenix of voter fraud, prompting angry rebuttals from Democrats who seem to be clawing back in a Republican bastion.

“Welcome to the new Arizona,” said Joseph Garcia, the director of the Latino Public Policy Center at Arizona State University. “We’re slowly shifting from a red conservative state to a blue progressive state. Will this process be smooth at every turn? No way.” 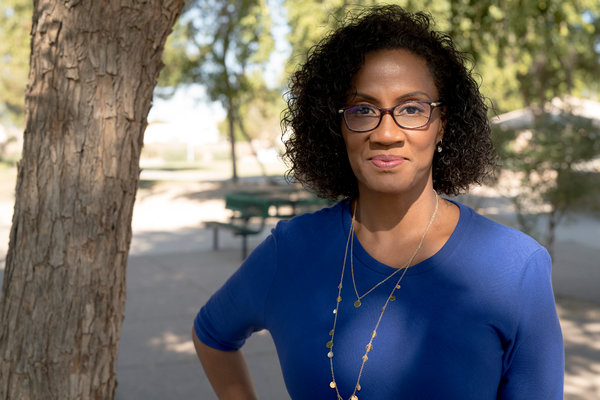 In a state that is home to conservative icons like Joe Arpaio and Jan Brewer, the power struggle is revealing one potential path forward for Democrats fighting to win elections in a state where they haven’t won an open Senate seat since 1976: embrace the center.

[Here’s a look at how close the results are in Arizona, Georgia and Florida]

Kyrsten Sinema, 42, the Democrat in the race, started out as a liberal but moved hard to the middle after winning a seat in the House of Representatives in 2012. She drew attention for staking out relatively conservative positions on various issues, sometimes siding with Mr. Trump and other Republicans.

Some liberal Democrats were left aghast by such positioning, but it seems to be working for Ms. Sinema, who is currently ahead of her rival by about 20,000 votes. About 150,000 voters who cast ballots for Gov. Doug Ducey, a Republican who sailed to re-election this week, also voted for Ms. Sinema, tallies show, suggesting that her strategy of appealing to moderate Republicans and independent voters may be working.

At the same time, her Republican opponent, Martha McSally, 52, a congresswoman and former United States Air Force pilot, drifted away during the campaign from centrist positions to a more energetic embrace of Mr. Trump on issues like building a wall on the border with Mexico.

Arizona is just one state where voting has been marked by confusion, rancor and undecided races in the aftermath of the midterm elections. Races in Florida and Georgia also remain extremely close.

In Arizona, election officials emphasized the need to count mail-in ballots, early ballots dropped off on Election Day and provisional ballots. Turnout was unusually robust in the state, with some estimates reaching as high as 65 percent, the highest level in decades.

Republican officials filed a lawsuit against Adrian Fontes, a Democrat and the top election official in Maricopa County, which encompasses Phoenix, over the way that signatures on ballots are verified. But a settlement was quickly reached requiring all counties in the state to continue checking signatures until Nov. 14.

In a state where Republicans have exerted near hegemonic control in some levels, Ms. Sinema’s strategy of appealing to voters on both sides of the fence comes with obvious risks.

For instance, in the closing days of the race, the Republican Party sent out mailers to some Democratic voters in the state. The leaflets didn’t mention the Republican or Democrat in the race but the Green Party candidate, Angela Green, and her support for policies like legalizing marijuana and robustly expanding public health care.

“It was a classic reverse psychology tactic,” said Tyler Montague, a Republican campaign strategist in Arizona, emphasizing how the mailers may have had the effect of peeling away liberal support for Ms. Sinema, while bolstering Ms. Green.

Never mind that Ms. Green dropped out of the race and endorsed Ms. Sinema. Ms. Green, 48, who works in the mortgage industry and is an avowed progressive, still received about 47,000 votes — far more than the 20,200-vote lead currently held by Ms. Sinema over Ms. McSally.

The small Green Party’s role in the race has elicited recriminations from Democrats over the possibility that their candidate could end up losing to a Republican closely aligned with President Trump if the final vote count shifts in Ms. McSally’s favor. 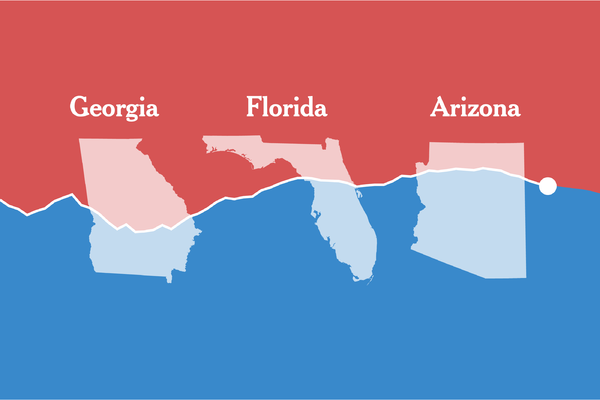 See How the Close the Results Are in Florida, Georgia and Arizona

The races for Senate and governor may head to a recount or a runoff.

“That underestimates the intelligence of the tens of thousands of people who voted for me,” said Ms. Green. “Obviously there are a lot of people out there who are very frustrated with both sides.”

In a state where registered Republicans still easily outnumber Democrats, promoting Green Party candidates is nothing new. In 2010, a Republican political operative went so far as to recruit drifters and homeless people onto the Green Party ballot in an effort to siphon some support from Democrats.

And in a twist involving some irony, Ms. Sinema got her start in politics as an activist and spokeswoman for the Green Party in Arizona. She then joined the Democratic Party, won a seat in the State Legislature and went on to be elected in 2012 to the U.S. House of Representatives.

The confusion surrounding the race is eliciting different reactions from voters.

“I’m glad they're taking the time to do it right,” said Brenda Palmer, 57, a financial reporting manager with the Arizona State Retirement System. Ms. Palmer said she voted in the past for both Republicans and Democrats but opted for the first time in this election to vote a straight Democratic ticket.

“Sometimes they come back so quickly I wonder how accurate can it be,” Ms. Palmer added, referring to the way election results are released in Arizona.

Others were already expressing fatigue with an often venomous race in which Democrats and Republicans spent heavily on attack ads.

“I didn’t care for either of them because of the way they went after one another,” said Roger Quaing, 72, a retired manager of auto parts warehouses. Still, he voted for the Republican in the race. “I felt McSally was the lesser of two evils.”