What’s the Next Mayor of New York’s One Big Idea?

When Bill de Blasio ran for mayor of New York City in 2013, he was able to successfully distill his campaign into one big idea: creating universal prekindergarten. It reflected his larger theme of reducing inequality, and it was a promise he was able to deliver on not long after taking office.

The large field of candidates running for mayor this year have plenty of ideas, from cash relief to property tax reform. But there is not, as of yet, one bold proposal that stands out in a similar way.

The mayor’s race is widely viewed as the most critical New York City election in a generation as voters choose a leader to guide the pandemic recovery. But weakened tax revenues could make it difficult to start ambitious new programs.

Ahead of the June 22 primary, The New York Times asked eight leading Democrats and two Republicans to describe their one big idea for the city.

Andrew Yang, the former presidential hopeful, has perhaps the most memorable proposal: A pared-down version of the universal basic income plan that he championed during the 2020 presidential campaign.

But instead of offering every American $1,000 a month, he proposes giving less than one-tenth of New Yorkers $2,000 on average per year.

Still, Mr. Yang says his plan would be the “largest local cash relief effort in the country,” though he is still trying to figure out how exactly to pay for it.

“We need to get cash in the hands of New Yorkers who need it most if we want our city to come back stronger than ever,” he said.

The program would cost $1 billion per year, and Mr. Yang suggested that the city could offset some of that by closing tax loopholes for large institutions like Madison Square Garden and Columbia University.

Eric Adams, the Brooklyn borough president, is proposing a “People’s Plan” with three components: tax credits for poor New Yorkers, free and low-cost child care for children under 3, and an app called MyCity to apply for benefits like food stamps.

Under Mr. Adams’ tax credit plan, which he is calling NYC AID, poor families would receive about $3,000 per year.

He also wants to give child care providers space in buildings owned by the city and offer developers incentives for charging them low rents.

“Nothing holds back a woman’s opportunity to move up in business or to be employed than the lack of child care in this city,” Mr. Adams said. “That is devastating families.”

The tax credit plan would cost about $1 billion a year. He said he would pay for it by cutting 3 to 5 percent of costs across city agencies, reducing the city work force, and increasing taxes on “ultramillionaires.”

He wants to require new apartment buildings with more than 10 units to make 25 percent of them affordable to low- and middle-income families. And he wants to convert nearly 3,000 vacant lots owned by the city into affordable housing run by nonprofit groups.

“The big real estate developers hate this plan — and for me, that’s a badge of honor,” Mr. Stringer said. 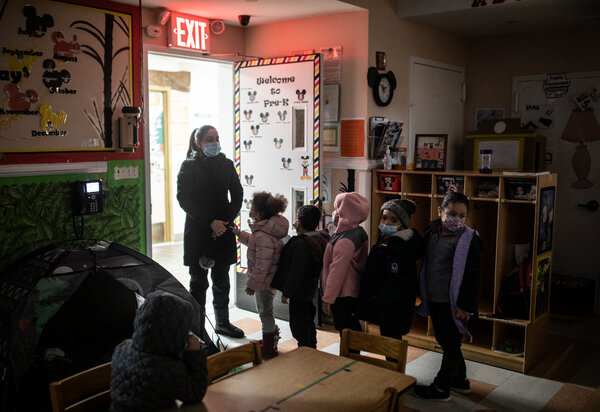 Maya Wiley, a former counsel to Mr. de Blasio, has a universal community care plan to offer 100,000 families a $5,000 annual grant to care for children and older people.

The plan includes building “Community Care Centers” that would provide free child care, job training and activities for seniors, with a goal of reaching 300,000 New Yorkers in the first year.

“As mayor, I will help us create a caring economy, where we invest in families through child care grants, so families can take care of themselves,” she said.

Ms. Wiley wants to pay for the program, which would cost about $500 million, through local and federal funding, including by freezing the hiring of police and correction officers for two years.

Dianne Morales, a former nonprofit executive, has excited left-leaning voters with her plan to defund the police.

Ms. Morales wants to cut the $6 billion annual police budget in half and spend some of that money to create a “Community First Responders Department” to address homelessness and mental health crises.

Ms. Morales said that the police could not continue to “profile, criminalize, and kill Black people with abandon.”

“We need to keep the police out of interactions where their presence is likely to do more harm than good,” she said.

Kathryn Garcia wants to cut down on bureaucracy