What to Know About California’s Drought 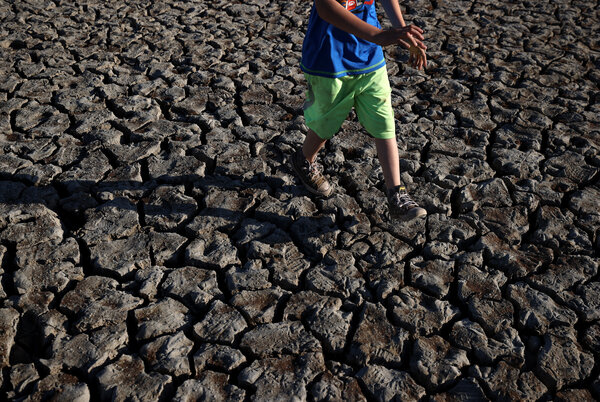 As the weather warms, coronavirus cases continue to decline and vaccinated Californians gleefully plot their “shot girl summers,” I regret to inform you that the Golden State’s next big disaster is already upon us.

Although, depending on whom you ask, this one may have been unfolding for decades.

Yes, I’m referring to the drought gripping much of the state.

It’s a problem that scientists are expecting to get worse this year, particularly because tinder-dry conditions are likely to lead to another devastating — not to mention long — wildfire season. But experts say the outlook isn’t all bad.

Nevertheless, California’s drought situation is something we’ll probably be talking about a lot in coming months. Here’s what you need to know.

How bad is the water shortage?

It’s not good. To put it simply: California relies on wet years to replenish its water supply during dry years. And while 2019 was a flood year, the past two years have been dry.

Last year in particular wasn’t just dry, though. “It also set the all-time records for hottest summer, and our forests caught on fire,” said Jeffrey Mount, senior fellow with the Public Policy Institute of California’s Water Policy Center. “It was a scorcher.”

Heat compounds the effects of dryness. During every dry year, more water evaporates into the atmosphere. Plants pump more water out of the soil to survive.

That dry soil requires earlier and more irrigation, which is where the vast majority of California’s water goes, Mount said. (Some 80 percent of water used by businesses and homes in the state goes toward agricultural irrigation.) “This is very disruptive,” he said.

And then there’s the matter of the Oroville Dam, where damage was discovered in 2017 that could have resulted in catastrophic flooding, effectively decreasing the capacity of what Mount described as the state’s most important reservoir.

“We went in with one hand tied behind our back,” he said.

All that combined means that California is the water equivalent of three years into a dry cycle, even though we’re only in the second dry year, Mount said. And it’s all but certain we won’t get any more significant rain this season.

What happens when there’s so little water?

The same thing that happens when any valuable resource becomes scarce: There’s a scramble to use it.

With the state’s reservoirs drawn down, farmers have been forced to turn to groundwater, Mount said. The problem is that, until recently, the state’s groundwater supplies weren’t regulated, so they haven’t had a chance to recharge.

“We have been using groundwater unsustainably for more than a century,” he told me. “That’s had a cascade of unintended and unwanted consequences: community wells drying up, land subsidence of many feet, the drying up of springs and wetlands.”

Native plants and animals, especially fish, are struggling. And problems with groundwater supplies and quality end up disproportionately affecting poorer, rural communities — home to many farmworkers.

Why did Gov. Gavin Newsom declare a drought emergency in only part of the state? And why are some pushing him to declare one statewide?

Earlier this month, the governor declared a drought emergency in the Russian River Watershed, where he said the drought conditions were the most severe.

Marty Ralph, director of the Center for Western Weather and Water Extremes with the Scripps Institution of Oceanography, told me that an atmospheric-river-driven storm in January helped stave off some of the driest conditions in the Central Valley.

“The drought is less serious than it would have been because of that one storm,” Ralph said.

Things could change, though, as dry conditions continue throughout the state into the summer, the governor said.

Some — particularly in the state’s agricultural heartland, the San Joaquin Valley — have pushed Newsom to declare a statewide drought emergency because it would relax some regulations, potentially giving desperate farmers access to more water.

But Ellen Hanak, director of the institute’s Water Policy Center, said that the official emergency could cut both ways, loosening some rules and tightening others for ecological reasons.

The bottom line, she said, is that a drought emergency declaration “doesn’t create water.”

Is there good news?

The outlook isn’t completely grim, experts said. And we can thank the drought that wracked the state from 2012 to 2016 for that.

“The fact that it’s not long ago we had a major drought is in some ways an advantage,” Hanak told me. “Last time, they had to dust off a playbook from the late 1970s on some of the issues they were facing.”

Urban water agencies have become much better at trimming water usage for things like landscaping irrigation and have honed their systems for measures like recycling water — meaning that most Californians probably won’t be asked to stop flushing their toilets. Remember how many sprawling California lawns got replaced with native plants or hardscapes in the mid-aughts? Those lawns, experts say, are never coming back.

Ralph, of the Scripps Institution, said that research into the effectiveness of what’s known as “forecast-informed reservoir operations” had also been promising.

That means, basically, controlling the levels of big reservoirs based in part on weather forecasts, which have long been considered too unreliable. The team that Ralph has been working with from across state, local and federal agencies found it was viable in the Russian River area. Without forecast-informed reservoir management there, things could be even worse right now. Now they’re trying it in other reservoirs.

As the drought imperils crops in the San Joaquin Valley, some farmers are questioning the future of agriculture there, The Los Angeles Times reports.

The Mercury News put together dramatic photos of Lake Oroville that show the effects of the drought.

Read this 2015 story about ancient “megadroughts” in California and what they may (or may not) tell us about our climate change-altered present and future.

See how California is faring with the United States Drought Monitor.

Here’s what else to know today

A new analysis found as much as 39 million carbon credits created by California’s climate policy are not creating real carbon savings, ProPublica reports.

The authorities say that the 2020 Markley Fire in Northern California, which killed two people and became part of one of the state’s largest in history, was intentionally set to cover up a murder, CNN reports.

The Los Angeles Times points out that President Biden’s address to lawmakers was groundbreaking. For the first time in history, a U.S. president was flanked on the dais by two women — both from California.

Customers who ordered Tesla solar roof shingles are being hit with price increases before installation that are tens of thousands of dollars higher than earlier quotes.

Disneyland is reopening today — a major symbolic milestone in a state where life has been restricted for more than a year.

Here’s everything else you need to know about going to Disneyland now, from my colleague Tariro Mzezewa, who covers travel.

California Today goes live at 6:30 a.m. Pacific time weekdays. Tell us what you want to see: [email protected]. Were you forwarded this email? Sign up for California Today here and read every edition online here.

Jill Cowan grew up in Orange County, graduated from U.C. Berkeley and has reported all over the state, including the Bay Area, Bakersfield and Los Angeles — but she always wants to see more. Follow along here or on Twitter.