In late October, administrators in a suburban New York school district told employees that some of their apparel was making students feel uncomfortable, and even threatened.

At issue were masks showing the so-called thin blue line flag, which signals support for the police but which has increasingly been used to display opposition to the Black Lives Matter movement, which rose in opposition to racism in policing.

Wearing the symbol violated a district policy prohibiting employees from expressing political speech, officials said. The logo, a black-and-white version of the American flag with a single blue stripe at its center, could no longer be worn by staff members.

Days later, a group of employees of the district, in Pelham, N.Y., appeared at work wearing shirts bearing the word “Vote” and the names of Black people who had been killed by the police, prompting accusations of hypocrisy and political bias.

The resulting controversy has divided Pelham, an affluent and mostly white Westchester County town of about 12,000 people just north of New York City.

The tense debate exemplifies the political tinderbox that much of the United States has become, where an emblem on a mask or a patch on a sleeve can ignite a dispute that consumes a community.

At the center of the conflict is a symbol that has come to mean vastly different things to different people, a black, white and blue Rorschach test whose significance continues to shift amid a continuing national reckoning over racism and police violence.

“It made a lot of people upset here, obviously,” said Ralph DeMasi, a school safety coordinator who was told not to wear the flag. “Clearly a directive was given. One side followed it, while another side was allowed to express their views.”

Facebook discussions have grown heated. Neighbors staked out clear positions and lined up in the cold to speak at a public meeting. School employees and parents said they had gotten threatening messages as the district attracted national media attention.

“People are taking this hard line,” said Solange Hansen, a Black and Latina woman who moved to Pelham last year and whose teenage son is a student there. “All of a sudden, overnight, you see these blue line flags on people’s lawns. You see them in people’s businesses. And that makes it really hard for the people of color.”

On Friday evening, The Pelham Examiner, a local news outlet, published a letter written by a Pelham high school senior, Nadine LeeSang, that expressed support for the district’s policy and said that the flag reminded students of color of “racist experiences they have had” with law enforcement.

“Nobody was really talking about how students felt uncomfortable, and it was kind of being dismissed,” Ms. LeeSang, 17, who is Black and Asian, said in an interview. Her letter was signed by 15 other people, most of them also students. 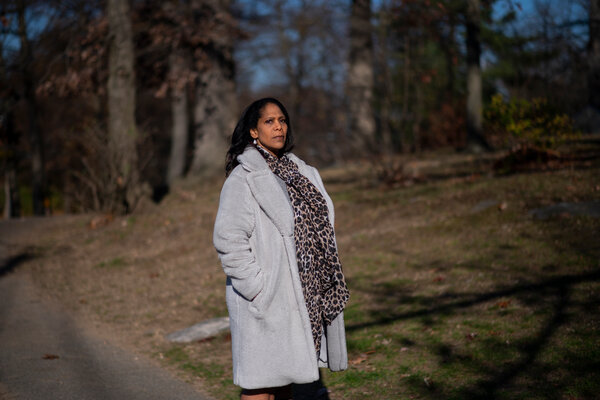 The debate over the flag’s meaning has played out across the country, particularly after the widespread protests this summer over police brutality and systemic racism.

An Ohio school district banned it after a football player displayed it before a game; a school in another Ohio district suspended students for carrying it onto the field. There were opposing rallies in a Massachusetts town where officials ordered the flag removed from fire trucks.

Those who support the flag say it has long been used to honor law enforcement officers who sacrificed their lives, and that it is not meant as a political statement.

“It signifies a memorial, a connection between officers killed in the line of duty and those who continue with their duties in the present,” said Carla Caccavale, a Pelham resident who has four children enrolled in district schools and whose father, a New York City Transit detective, was killed while trying to stop a robbery when Ms. Caccavale was an infant.

Ms. Caccavale has made sweatshirts honoring her father’s memory that include a thin blue line patch. Although she initially made them only for her family and another family, she has begun to sell them to support police-related charities.

When school staff members were told they could no longer wear the flag, her sweatshirts were included in the ban. She said the decision baffled her.

“You have to look at the intention of the sweatshirts,” she said.

The flag’s critics also say the image has acquired a racist connotation after being carried at demonstrations by hate groups, most notably a Charlottesville, Va., rally in 2017, where white nationalists staged a weekend of protests that turned violent.

“Now that you see this flag flown alongside this other flags and racist symbols, it’s very hard not to say, ‘Well, that’s a racist symbol,’” Annemarie Garcia, who has two teenagers enrolled in Pelham schools, said. “Even if that’s not what it meant to you originally.”

In recent months, the flag has become a more common sight at pro-police demonstrations around New York and elsewhere. It hung prominently behind President Trump at a campaign rally in Wisconsin, and the campaign has sold merchandise bearing the symbol.

Mr. DeMasi, the Pelham school employee who was told not to wear the flag, said that he did not connect it to white supremacists. But he acknowledged that it had become a political symbol.

“Obviously, you’ve seen caravans with the Trump flag in the back of pickup trucks and then the thin blue line,” Mr. DeMasi, a former police officer, said. “I think maybe people had a good intention, but it ended up giving the meaning of the thin blue line a black eye.”

But the ban on Ms. Caccavale’s sweatshirts provoked a ferocious letter from the president of the Detectives’ Endowment Association, a New York City police union, who accused Cheryl Champ, the district’s superintendent, of “perverting views” of students and turning them into “cop-haters.”

The letter touched off an onslaught of coverage by local and national media outlets, including Fox News, where Ms. Caccavale has appeared twice.

Much of the coverage has focused on Ms. Caccavale and the school board’s policy, to the frustration of some who said they feared that the concerns of nonwhite students were being ignored.

The school district would not provide details about the students who were involved, including the number of complaints or the ages of those who had filed them.

Ms. Garcia, who volunteers for the district, said she had heard multiple students explain their views about the flag to staff members but she declined to provide details, citing privacy concerns.

“You have adolescents who actually stood up and expressed their concern,” Ms. Garcia, who identifies as white and Hispanic, said. “And these are not adolescents who look like the majority of the kids in Pelham.”

“I apologize for not enforcing this policy evenly at its outset, which I recognize created an appearance of being one-sided,” she said.

Several people who spoke at the meeting in support of Ms. Caccavale urged administrators to bring the police into classrooms and foster a discussion about the symbol.

Ms. Hansen rejected that suggestion, saying it ignored the feelings of children like hers, who would be threatened to see officers in schools.

“Why force that on our kids?” she asked. “If even one kid said ‘I am afraid of that symbol,’ isn’t that enough?”