Utah Mayor Killed in Afghanistan Wanted to Serve ‘However I Can’

NORTH OGDEN, Utah — The call had come again. Brent Taylor, the mayor of North Ogden and a major in the Utah National Guard, would be going to Afghanistan for his fourth deployment.

He told his constituents about it on Facebook in January, leaning into the camera to explain that he had been called to serve his country “whenever and however I can” and that he would be gone for a year, as part of a team helping to train an Afghan Army commando battalion. “Service is really what leadership is all about,” he told them.

He said goodbye to his wife, Jennie, and their seven children, and turned over his municipal duties to his friend Brent Chugg. “You need to keep safe,” Mr. Chugg told him. “I will,” Major Taylor replied.

He did not make it home. Major Taylor, 39, was killed on Saturday in an insider attack, apparently by one of the people he was there to help.

The Pentagon did not say right away who had been killed. But the news that it was Brent Taylor was soon all over Utah, relayed in expressions of remorse by politicians and civic leaders.

In a nation already riven with anxiety over a heated midterm election, a synagogue mass shooting and high-profile bomb scares, Major Taylor’s death and the wounding of another service member in the same attack sent up a fresh wave of grief. It was a brutal reminder of a 17-year-old war that has carved gaping holes in communities across the country, with little end in sight.

His death hit particularly hard in Utah, where a widely shared Mormon faith binds many of its three million residents in a way that is rare for the modern era. On Saturday, when Mr. Chugg arrived at the home of Jennie Taylor, they embraced and she began to sob.

“We are overwhelmed with heartache, but not regret,” Ms. Taylor’s sister, Kristy Pack, said on Sunday, standing outside the modest brick house. Even though Major Taylor died in a suspected insider attack, Ms. Pack said, “in our view there is not a whole lot of room for anger.” 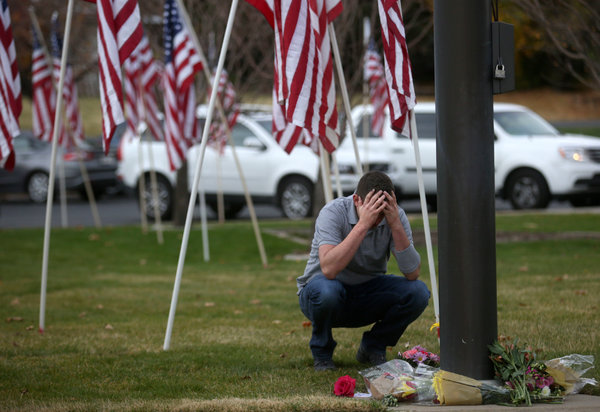 At a news conference at the Utah National Guard headquarters outside Salt Lake City, Gov. Gary R. Herbert said he knew Major Taylor personally, calling him “the personification of love of God, family and country.”

Governor Herbert said he knew that some friends had tried to persuade Major Taylor not to return to Afghanistan, arguing that he had done enough for his country. But Major Taylor wanted to go, the governor said, and had his wife’s support for the decision, because he loved the people of Afghanistan and thought he could do some good there.

A Utah law permits elected officials who belong to the Reserves or the National Guard, like Major Taylor did, to retain their civilian posts while deployed by temporarily ceding authority to a surrogate.

North Ogden is a middle-class suburb of about 19,000 people north of Salt Lake City at the foot of the Wasatch Range. On Sunday, residents rose at dawn to carry American flags on towering poles through the foggy streets, driving them into the cold ground along the road to City Hall.

Then they dispersed to the many churches in the town, where they bowed their heads as their leaders called on “brothers and sisters” to pray for Brother Taylor and his family. It happened to be a Fast Sunday, when Mormons skip meals and donate food to the hungry. At one service, somber boys in crisp white shirts circled the pews with the sacrament.

“I just don’t know of a finer man,” said Clark Skeen, a resident of North Ogden.

Major Taylor, who grew up in Arizona, enlisted in the military after the terrorist attacks on Sept. 11, 2001. So did his five brothers. Before his last tour, he had served twice in Iraq and once in Afghanistan.

He joined the City Council in 2009, was chosen as mayor in 2013 and was re-elected in 2017, building a reputation as a hands-on leader and careful listener, someone who would be seen in the streets before dawn to direct snow plows on stormy days.

Mr. Chugg said that as mayor, Major Taylor was dogged in pursuit of city improvements, building an amphitheater, a public works building and new roads. Other city officials, he said, had been satisfied with the status quo: “Not Mayor Taylor.”

A small memorial began to form on Sunday outside City Hall, below a soggy American flag lowered to half-staff. One woman, Deborah Eddy, 63, dropped off a bright yellow lily in a flowerpot. Another, Judy Viskoe, 36, stood by, gripping a black umbrella.

“I cried all day yesterday,” Ms. Viskoe said. “I don’t politically align with him. He’s a Republican. But I noticed in his running of this town that he treated everyone with respect, and he listened, and he didn’t bring his politics into the mix. He’s just unlike any other mayor I’ve ever experienced.”

The number of American troops in Afghanistan has fallen to fewer than 14,000 in 2018, from about 100,000 in 2011, when American forces were still officially engaged in a combat mission there. All but a few large bases have been shuttered, and the main role of the remaining American troops is to advise and train Afghan forces, not fight the Taliban themselves.

The change in mission has also changed the mix of troops who are in harm’s way. The Americans who are training Afghan troops are often older, higher-ranking and more experienced than before.

And those are the troops who, being surrounded by armed Afghans, tend to face the biggest risk from insider attacks, a persistent threat in the country. Nearly half of the American combat deaths in Afghanistan this year have come in suspected insider attacks.

Together, those trends have led to a steady climb in the average age and rank of American casualties.

Since the draft ended in 1973, it has also become increasingly common for siblings to serve in the military, like Major Taylor and his brothers. Researchers say that having a parent or sibling in uniform increases the likelihood that someone will join up, and so does coming from a large family. This spring, quadruplets from Michigan all enlisted, each in a different branch of the armed forces.

Major Taylor’s body is scheduled to arrive at Dover Air Force Base in Delaware on Monday at 9:45 p.m. Members of his family and representatives of the Utah National Guard are expected to be on hand.

“Utah weeps for them today,” Lt. Gov. Spencer J. Cox wrote on Facebook after receiving word of the major’s death. “This war has once again cost us the best blood of a generation.”

When Major Taylor left North Ogden in January, hundreds of residents lined the street to see him off, and the local police gave him an escort.

“Right now there is a need for my experience and skills to serve in our nation’s long-lasting war in Afghanistan,” he wrote at the time, adding that his work would fulfill President Trump’s order to expand the capabilities of the Afghan forces.

Rather than disappear into a war zone, Major Taylor kept up a steady stream of Facebook posts while he was deployed, connecting his community to a conflict that is off the radar of many Americans.

In what turned out to be his final public post, on Oct. 28, he tapped out a message about the recent Afghan election.

“It was beautiful to see over 4 million Afghan men and women brave threats and deadly attacks to vote in Afghanistan’s first parliamentary elections in eight years,” he wrote. “Many American, NATO allies, and Afghan troops have died to make moments like this possible.”

Then he turned to his own country.

“As the USA gets ready to vote in our own election next week, I hope everyone back home exercises their precious right to vote,” he wrote. “And that whether the Republicans or the Democrats win, that we all remember that we have far more as Americans that unites us than divides us.”